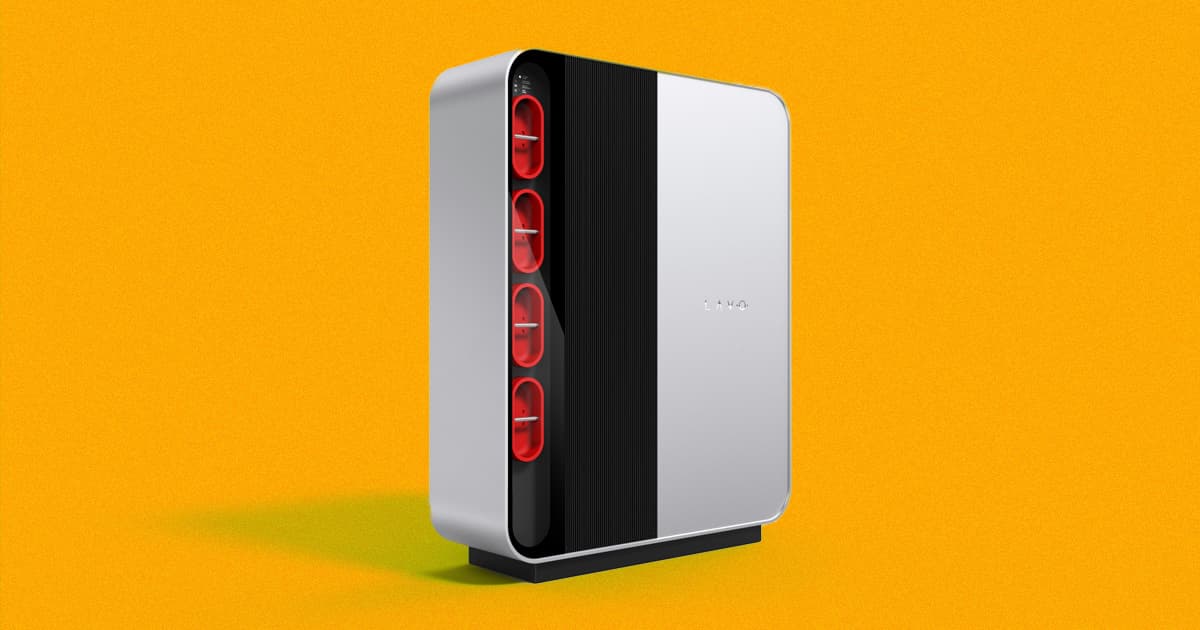 This is the World's First Home Hydrogen Battery

It can store three times as much energy as Tesla's Powerwall 2.

It can store three times as much energy as Tesla's Powerwall 2.

Australian energy company Lavo is throwing down the gauntlet to Tesla's Powerwall with a home battery storage system that doesn't rely on conventional batteries at all, New Atlas reports — opting for hydrogen as fuel instead.

For both systems, the idea is to soak up any excess energy generated through solar or wind energy systems, as well as provide an emergency ration of power in case the grid ever fails.

Lavo's massive battery, which it's calling the Green Energy Storage System, is technically an electrolysis unit that can generate hydrogen from water, store it, and then turn it into electricity using a fuel cell, much like a hydrogen vehicle.

Thanks to its massive 40 kilowatt-hours capacity, Lavo's battery has nearly three times the capacity of Tesla's current-gen Powerwall 2. That's plenty of energy to power an average home for two days straight — and a strident shot across the industry's bow.

Lavo says its system will last longer than lithium battery systems thanks to its reliance on hydrogen gas rather than the chemicals in a conventional battery. It's also technically more environmentally friendly as it doesn't use as many rare earth metals.

But then there's also the chance of fire or — in the very worst case — a Hindenburg-like explosion. Lavo says any leaks will disperse quickly, though, making it "inherently no more dangerous than other conventional fuels such as gasoline or natural gas," as the company writes in its FAQ.

On the downside, there are inefficiencies involved in storing hydrogen gas and then turning it into electricity. Lavo says its "round-trip efficiency is above 50 percent," far below your average lithium ion battery system's efficiency.

Unsurprisingly, the system costs a pretty penny. The Energy Storage System goes for about $26,900, more than three Tesla Powerwall 2s in Australia, according to New Atlas.

Fusion Futility
Elon Musk Slams Fusion, Says Future of Energy Is Wind and Solar
9. 9. 22
Read More
Mine! Mine!
Elon Musk Suggests Tesla Might Start Mining Lithium
4. 8. 22
Read More
World is on Fire
UN Calls Elon Musk's Bluff, Providing Detailed Plan to Prevent World Hunger
11. 16. 21
Read More
+Social+Newsletter
TopicsAbout UsContact Us
Copyright ©, Camden Media Inc All Rights Reserved. See our User Agreement, Privacy Policy and Data Use Policy. The material on this site may not be reproduced, distributed, transmitted, cached or otherwise used, except with prior written permission of Futurism. Articles may contain affiliate links which enable us to share in the revenue of any purchases made.
Fonts by Typekit and Monotype.