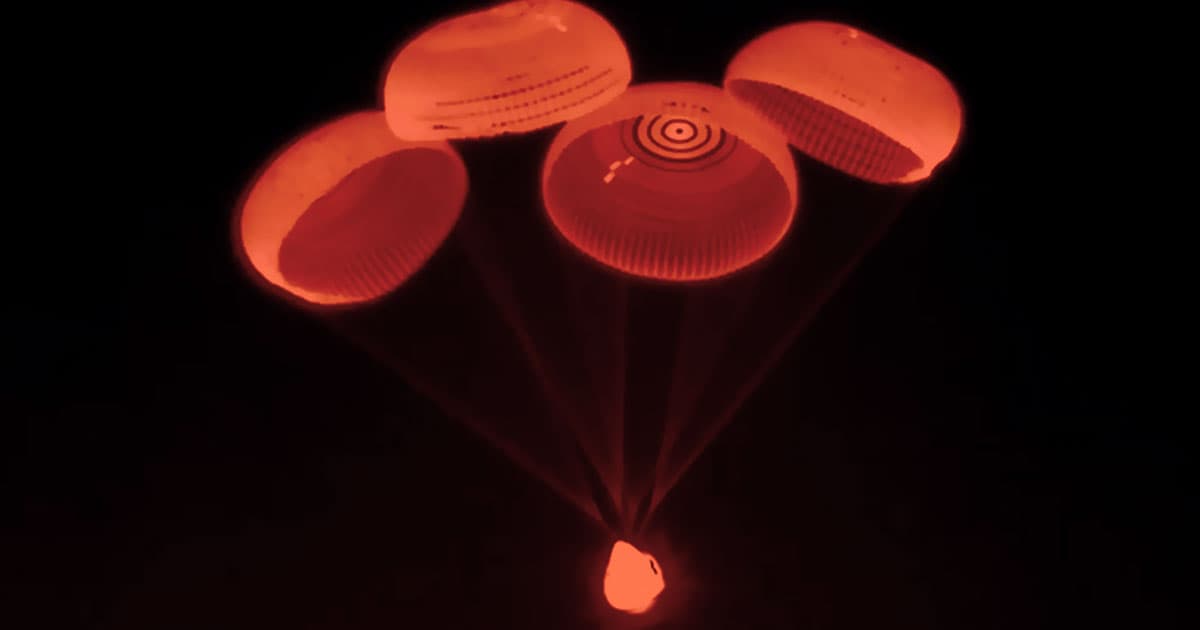 SpaceX Crew Dragon's Parachute Was Slow to Deploy During Splashdown

But NASA says that it was totally fine.

But NASA says that it was totally fine.

After an eventful 199 days in orbit that included major toilet malfunctions, a space olympics, and not one but two instances of the International Space Station spinning out of control, the Crew-2 astronauts who flew to the Space Station in a SpaceX Crew Dragon spacecraft have finally made it back to Earth with no problems… kind of.

During the descent home, one of the Crew Dragon capsule's four parachutes was slow to deploy by a few seconds, adding a bit of last second drama to an already fraught mission. Luckily, the inflation rate of the parachute was still within normal limits and the capsule experienced a nominal descent speed, according to Ars Technica.

"The team will be going off and looking at how the loading was on the chute and understanding that behavior," NASA's human spaceflight chief Kathy Lueders said, according to Ars, adding that the slow deployment had occurred several times during testing. "The thing that makes me feel a little bit more confident is that the loading and the deceleration of the spacecraft all looked nominal."

The capsule, dubbed Endeavour, had an otherwise successful mission back home and splashed down in the Gulf of Mexico just off the coast of Pensacola, Florida on Monday night. It marked the fourth safe return of SpaceX’s Crew Dragon capsule to Earth from a mission to space.

The astronauts were supposed to be aboard the ISS to greet the Crew-3 craft when it arrived — but due to weather conditions as well as a minor medical issue, that mission was delayed until after Crew-2 left the orbital outpost. Pesquet — who made headlines during his stay for his stunning photographs from space and his vibrant social media presence — once again flexed his meme muscles to express his sadness at the situation.

It seems we will not cross paths with our #Crew3 colleagues on the Space Station. Pity, it would have been a pleasure to explain the finer points of living up here 😉

More on Crew-2: NASA Astronaut: SpaceX Forcing Her to Pee in Diaper Is "Suboptimal"