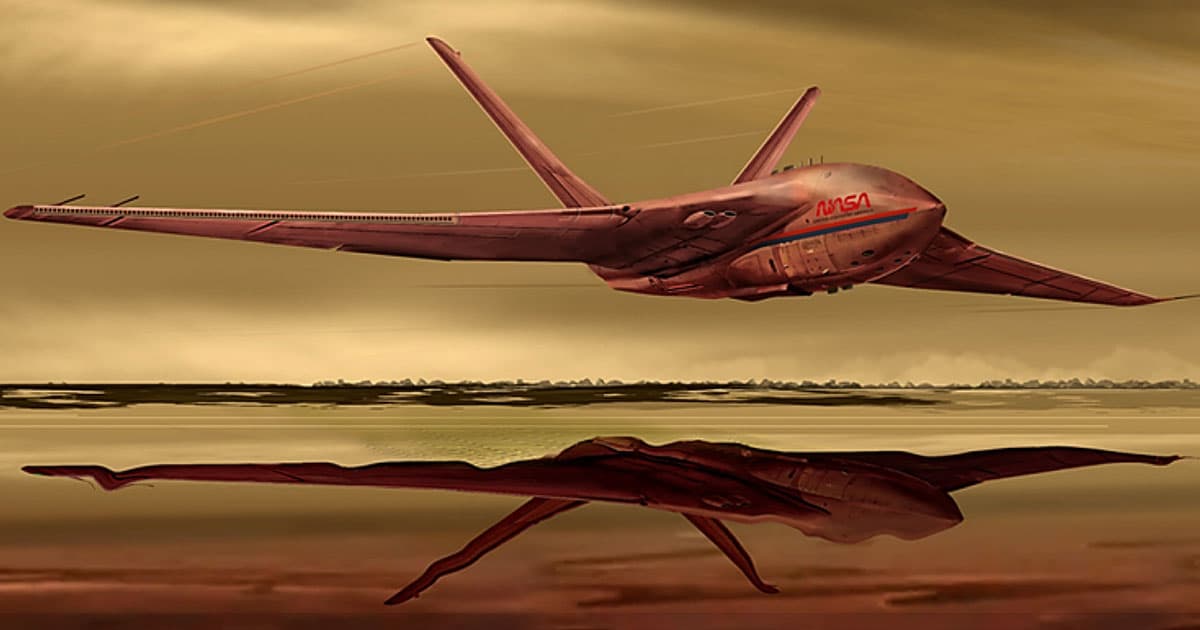 NASA's Innovative Advanced Concepts (NIAC) program has explored some truly wild concepts over the years, from giant radio telescopes on the far side of the Moon to interstellar object-chasing "orbital slingshots."

And this latest batch of ideas, announced by the agency this week, are just as outrageous as ever.

Among some truly out-there concepts, the latest round of issued NIAC grants includes an autonomous "lake lander" aircraft dubbed TitanAir designed to skim over the liquid methane lakes of Saturn's icy moon Titan.

While such an aircraft is only a fantastical glimpse into the distant future for now, it's nonetheless an inspiring concept that dares to dream of futuristic ways to probe the deepest depths of the solar system — not to mention cementing the agency's off-world flight ambitious after the resounding success of its Mars helicopter, Ingenuity.

The TitanAir concept is designed to not only surf Titan's cryogenic liquid methane and ethane lakes, but also designed to collect samples by floating on the surface like a boat.

NASA's Cassini-Huygens space probe first detected the long-suspected lakes on Saturn's largest moon back in 2006. Images taken by the spacecraft show immense, Great Lakes-sized bodies of liquid hydrocarbons, suggesting the moon holds far more oil and gas in that form than Earth does.

The amphibious craft would have to weather some extremely inhospitable conditions. Temperatures can drop to -290 degrees Fahrenheit on Titan, making it an incredibly bad choice for a home away from home.

NASA has considered several concepts to explore the surface of Titan over the years, including a robotic submarine that can be fully submerged in the moon's icy lakes.

Fortunately, we may be able to get a look at the moon's surface long before the development of a flying boat. In 2019, NASA announced it will send a robotic rotorcraft called Dragonfly to Titan as soon as 2027, an ambitious mission that would also build on the success of Ingenuity.

But flying on Titan will be an entirely different challenge. Dragonfly — and any of its successors — will not only have to survive incredibly cold temperatures, but also incredibly high atmospheric pressure, which is roughly 60 percent greater than on Earth.

Glow On
Scientists Unlock Decades-Old Mystery Behind Glow on Saturn
2. 9. 22
Read More
The Other White Meat
Space Colonists Will Likely Resort to Cannibalism, Scientist Says
12. 30. 21
Read More
Under the Sea
Scientists Intrigued by Possible Signs of Life on Saturn's Moon
7. 7. 21
Read More
+Social+Newsletter
TopicsAbout UsContact Us
Copyright ©, Camden Media Inc All Rights Reserved. See our User Agreement, Privacy Policy and Data Use Policy. The material on this site may not be reproduced, distributed, transmitted, cached or otherwise used, except with prior written permission of Futurism. Articles may contain affiliate links which enable us to share in the revenue of any purchases made.
Fonts by Typekit and Monotype.