This unlikely pair of findings answers decades-old questions about the ringed planet. 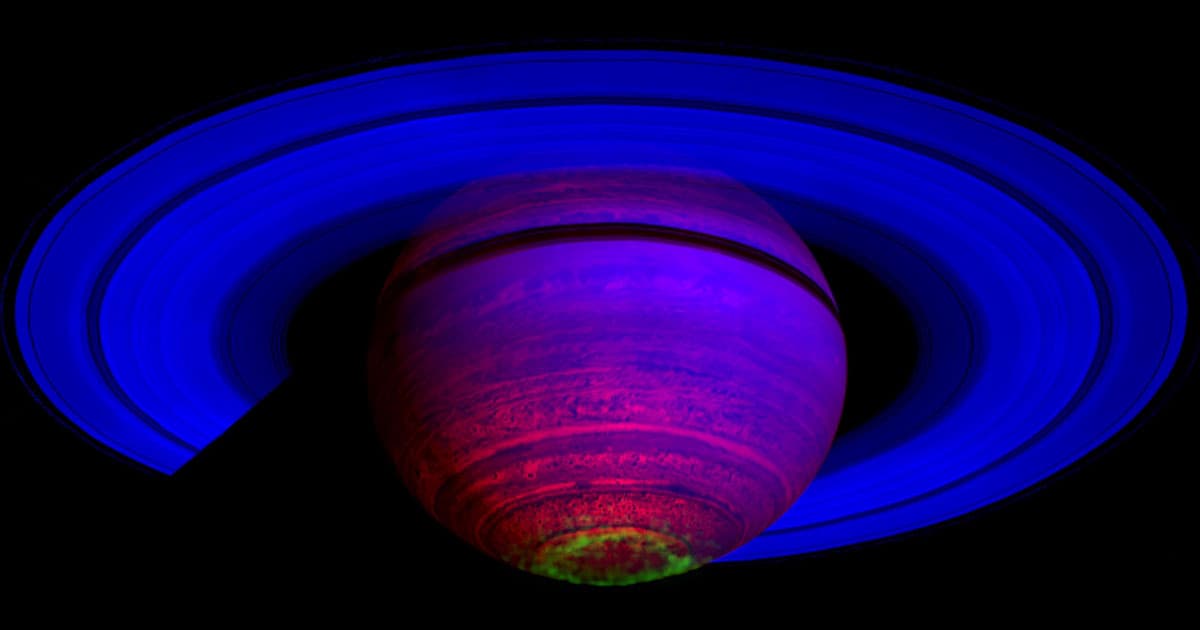 Planetary scientists believe they've unlocked not just one, but two of Saturn's many mysteries while studying its atmospheric currents.

A team of scientists led by Nahid Chowdhury, astronomer at the University of Leicester in the UK, says that it has found what powers the ringed planet's spectacular but little-understood auroras in a study published in the Geophysical Research Letters journal.

Before now, there were two known atmospheric mechanisms behind the gorgeous planetary phenomenon including Earth's own aurora borealis: interaction with charged particles that flow from the Sun, as is the case for Earth, or volcanic materials from a planet's orbiting moon, like on Jupiter.

While Saturn's auroras, which were first glimpsed back in 1979 by NASA's Pioneer 11 space probe, are also partially caused by volcanic materials, the scientists believe they have now discovered an additional mechanism. According to their research, some of the auroras are also created by swirling winds that take place within Saturn's own atmosphere.

This distinction is important not only because it unlocks the mystery behind some of the planet's huge, stunning auroras, but also because it helps the astronomers piece together an answer to another decades-old question.

Between the Saturn flybys of Voyagers 1 and 2 in the early 1980s and Cassini's in the early 2000s, scientists observed something very odd: the radio emission "pulses" used to measure the lengths of days on gas planets gave drastically different readings during the Voyager flybys than they did during Cassini's flybys decades later.

Astronomers have spent the subsequent 18 years scratching their heads over the unlikely rapid change in day length. But as Chowdhury notes, the same atmospheric winds that account for Saturn's auroras seem to have also affected the day-measuring pulses.

"Our understanding of the physics of planetary interiors tells us the true rotation rate of the planet can’t change this quickly, so something unique and strange must be happening at Saturn," Chowdhury said in a press release from the WM Keck Observatory in Hawaii, whose observations contributed to these findings.

"Several theories have been touted since the advent of the NASA Cassini mission trying to explain the mechanisms behind these observed [changes]," he added, calling the findings "absolutely thrilling."

It's the first time planetary scientists have discovered a link between a planet's day length and its auroras, Chowdhury explained.

Astronomers are only beginning to understand the many mysteries behind Saturn's auroras, but thankfully, many more wonders are still left for us to unlock.

Read This Next
Under the Sea
Scientists Intrigued by Possible Signs of Life on Saturn's Moon
Moon Beam
NASA Engineer: Humans Should Consider Settling Saturn's Moon Titan
Futurism
Here's What Alien Life on Saturn's Moon May Look Like
Futurism
NASA's Testing a Space Submarine to Use in Titan's Seas. It Will Be Cool. It Won't Be Easy.
Futurism
NASA Plans to Send a Robot to Hunt for Life on Saturn's Moon
More on Off World
Grow Up
Yesterday on the byte
NASA Scientist: Uranus' Name "Is Definitely a Distraction"
Keep Your Friends...
Thursday on the byte
Russian Spacecraft Accused of Tailgating US Spy Satellite by Just 37 Feet
Storm Warning
Thursday on the byte
Incoming Solar Storm Season May Totally Screw Up Satellites, Government Scientist Warns
READ MORE STORIES ABOUT / Off World
Keep up.
Subscribe to our daily newsletter to keep in touch with the subjects shaping our future.
+Social+Newsletter
TopicsAbout UsContact Us
Copyright ©, Camden Media Inc All Rights Reserved. See our User Agreement, Privacy Policy and Data Use Policy. The material on this site may not be reproduced, distributed, transmitted, cached or otherwise used, except with prior written permission of Futurism. Fonts by Typekit and Monotype.