Scientists Intrigued by Possible Signs of Life on Saturn's Moon

It's "very likely" hydrothermal vents on Enceladus could be habitable to Earthlike microorganisms. 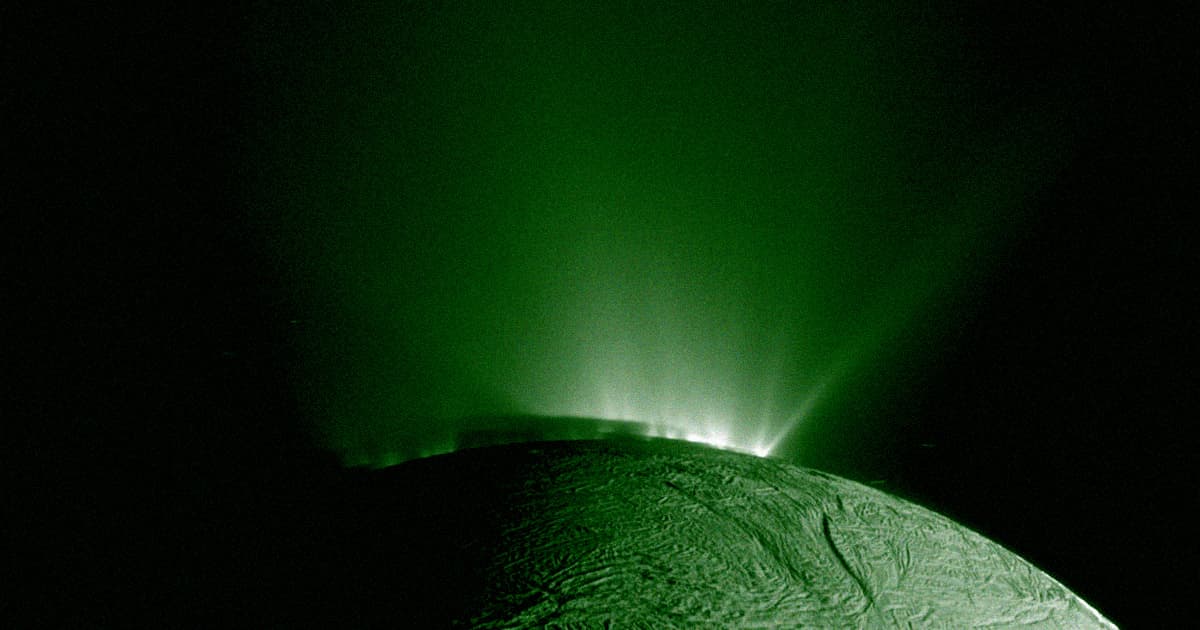 The icy crust enveloping Saturn's moon Enceladus has long fascinated astronomers. Evidence collected by NASA and the European Space Agency's Cassini-Huygens spacecraft suggests the shell could be hiding a massive subsurface ocean made up of briny water underneath it — which, tantalizingly, could potentially harbor life.

According to a new study by a team from the University of Arizona and Paris Sciences & Lettres University, published in the journal Nature Astronomy last month, Cassini's observations that found Enceladus is expelling plumes of methane gas suggest that the moon's subsurface oceans may be habitable to Earth-like microorganisms.

"We wanted to know: Could Earthlike microbes that 'eat' the dihydrogen and produce methane explain the surprisingly large amount of methane detected by Cassini?" asked Regis Ferriere, an associate professor at the University of Arizona and a lead author of the study, in a statement.

But figuring out the answer for sure is far from easy.

"Searching for such microbes, known as methanogens, at Enceladus' seafloor would require extremely challenging deep-dive missions that are not in sight for several decades," he added.

The team constructed mathematical models to see if methanogenesis could account for the data collected by Cassini. Their conclusion: microbial hydrothermal vent activity — or processes that would involve extraterrestrial microorganisms — could explain the methane detected by Cassini.

On Earth, hydrothermal activity is caused by cold seawater dipping into the ocean floor, where it gets warmed up by local sources of heat like magma. This water then gets expelled out of vents in the ocean floor, a process that drips methane into the water over time.

Most of this methane is released by microorganisms that use the heat as a source of energy, turning carbon dioxide into methane.

According to their computer simulations, the researchers found that similar conditions could exist on Enceladus.

"In summary, not only could we evaluate whether Cassini's observations are compatible with an environment habitable for life, but we could also make quantitative predictions about observations to be expected, should methanogenesis actually occur at Enceladus' seafloor," Ferriere said in the statement.

In fact, without the existence of biological sources of methane production, the levels of methane observed by Cassini couldn't be matched using their models.

Still, it would be premature to draw any definite conclusions.

"Obviously, we are not concluding that life exists in Enceladus' ocean," Ferriere added. "Rather, we wanted to understand how likely it would be that Enceladus' hydrothermal vents could be habitable to Earthlike microorganisms. Very likely, the Cassini data tell us, according to our models."

We simply don't have enough data to go off of just yet.

"In other words, we can't discard the 'life hypothesis' as highly improbable," Ferriere said. "To reject the life hypothesis, we need more data from future missions."

The researchers also didn't rule out other possible abiotic processes that could explain the methane data. For instance, the chemical breakdown of primordial organic matter in the moon's core could be causing significant amounts of methane to be ejected.

It's exciting new research that goes to show how little we know about Saturn's icy moons, despite Cassini's extensive legacy. Perhaps one day, another mission will even get a first hand look.

More on Enceladus: Scientists Loaded Tiny Organisms Into a Gun and Shot Them At Targets

Read This Next
Glow On
Scientists Unlock Decades-Old Mystery Behind Glow on Saturn
Who's There?
New Harvard Project Will Investigate Alien Technology
Mars Mushrooms
Black Mold From Earth Could Survive on Mars, NASA Says
Moon Beam
NASA Engineer: Humans Should Consider Settling Saturn's Moon Titan
Futurism
A Beautiful, 20-Year Old "New" Discovery: Jupiter Moon's Massive Liquid Plumes
More on Off World
TMNT
Jul 1 on the byte
Chunky Turtle Spotted Near NASA's Mega Moon Rocket
Cloud Spotting
Jun 30 on the byte
NASA Needs Your Help Spotting Clouds On Mars
Rolling Coal
Jun 29 on futurism
Space Travel Will Absolutely Gut the Environment, Scientists Warn
READ MORE STORIES ABOUT / Off World
Keep up.
Subscribe to our daily newsletter to keep in touch with the subjects shaping our future.
+Social+Newsletter
TopicsAbout UsContact Us
Copyright ©, Camden Media Inc All Rights Reserved. See our User Agreement, Privacy Policy and Data Use Policy. The material on this site may not be reproduced, distributed, transmitted, cached or otherwise used, except with prior written permission of Futurism. Fonts by Typekit and Monotype.