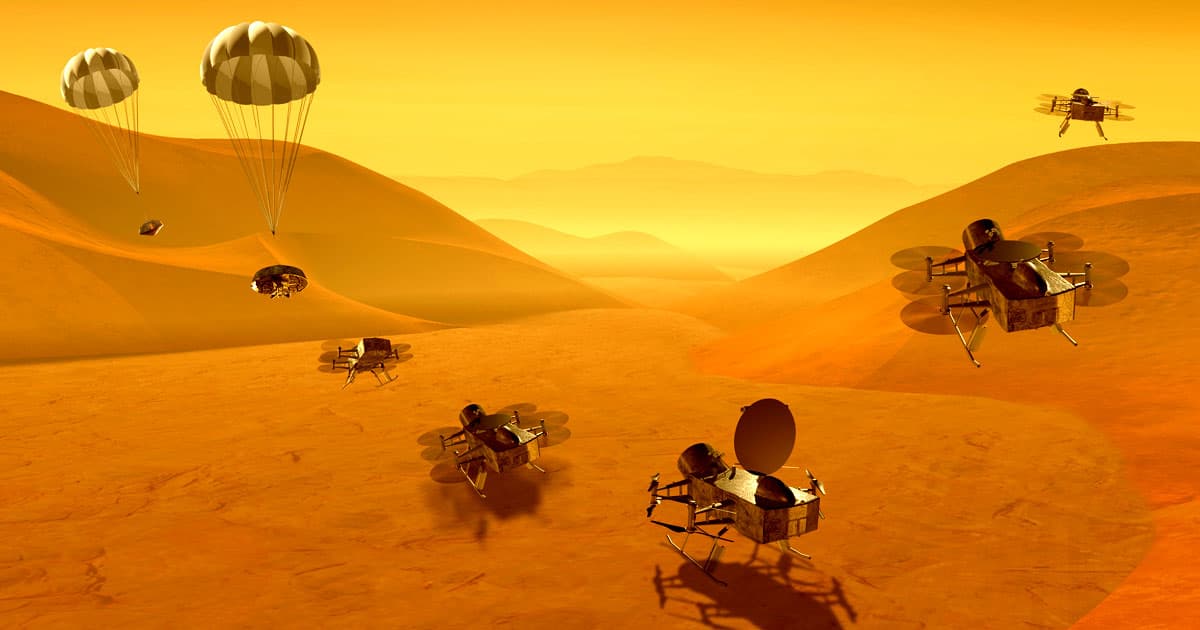 The Dragonfly mission will send a tiny rotorcraft to the ocean world to look for signs of life.

The Dragonfly mission will send a tiny rotorcraft to the ocean world to look for signs of life.

NASA just selected its next major planetary science mission via a telecast — and it's more ambitious than ever.

As part of project Dragonfly, NASA is planning to send a small spacecraft to Saturn's moon Titan, a moon with an extremely dense atmosphere.

As its namesake suggests, the craft would release a microwave-sized rotorcraft — think of it as a tiny helicopter drone — to fly from location to location above the surface of Titan. It will cover up to 180 kilometers total over two years to see what its surface is made of and find out if it's a good fit for human habitation.

BIG NEWS: The next @NASASolarSystem mission is… #Dragonfly – a rotorcraft lander mission to Saturn’s largest moon Titan. This ocean world is the only moon in our solar system with a dense atmosphere & we’re so excited to see what Dragonfly discovers: https://t.co/whePqbuGBq pic.twitter.com/BQdMhSZfgP

So why Titan? Titan is the only moon in the Solar System with a dense, planet-like atmosphere which could allow complex molecules to form and possibly enable it to harbor life. Jim Bridenstine describes the moon as the celestial body "most comparable to early Earth" in an announcement tweet.

Instruments on board will look for organic and chemical compounds that could possibly stem from past or recent life.

It won't be a walk in a park. The rotorcraft will have to brave temperatures around -300 Fahrenheit. Titan's atmosphere is mostly nitrogen and far more massive than Earth's as well affecting the way the rotorcraft's flight. But it won't need to put in as much effort to fly as compared to Earth: gravity is only one seventh what it is on Earth.

NASA chose two finalists for its New Frontiers mission back in December 2017. One was a sample return mission to the comet  67P/Churyumov-Gerasimenko (Comet Astrobiology Exploration SAmple Return, or CAESAR). The other was the Titan mission.

Launch date proposal for project Dragonfly is 2026 to get to Titan in 2034, according to NASA.

More on Dragonfly: A Team of Scientists Want to Land a Drone on Saturn's Largest Moon