An MIT plan would fling spacecraft toward interstellar visitors — before they careen out of our star system forever. 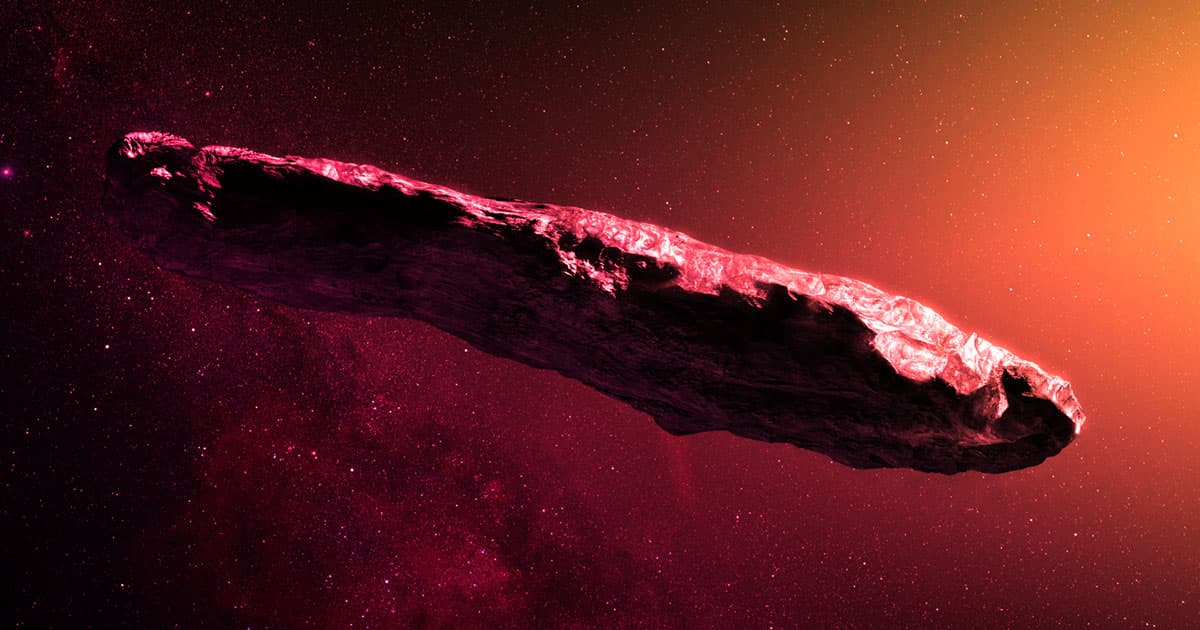 A team of MIT researchers are suggesting that we could use a "dynamic orbital slingshot" to get an up-and-close look at interstellar objects — or, in other words, they want to send tiny satellites screaming through space to chase space rocks from beyond our star system.

It's a far-out concept that's even grabbed the attention of NASA. The project has secured proof-of-concept funding from the NASA Innovative Advanced Concepts (NIAC) Program, an incubator for radically futuristic concepts such as turning a crater on the far side of the Moon into a giant radio telescope.

Interstellar objects have been a fascinating and relatively recent addition to scientific inquiry. In particular, space rock Oumuamua, first spotted in 2017, and 2I/Borisov, spotted by amateur astronomer Gennadiy Borisov last year, have puzzled astronomers due to their extremely unusual trajectories, leading them to believe they arrived from a neighboring star system.

"There are a lot of fundamental challenges with observing [interstellar objects] from Earth — they are usually so small that light from the sun needs to illuminate it in a certain way for our telescopes to even detect it," said Richard Linares, assistant professor in the Department of Aeronautics and Astronautics (AeroAstro) at MIT who came up with the idea, in a statement.

"They are traveling so fast that it’s hard to pull together and launch a mission from Earth in the small window of opportunity we have before it’s gone," Linares explained. "We’d have to get there fast, and current propulsion technologies are a limiting factor."

To get over these limitations, Linares suggests using a series of "static satellites" that each use "solar sail" technology — using only radiation of the Sun as propulsion.

This constellation of space buoys could then jump into action, releasing stored energy as well as using the gravitational pull of the sun to slingshot themselves after interstellar objects once they've been detected.

But they won't attempt to stop when they get to these elusive extragalactic visitors.

"Flyby missions tend to be easier because they don’t require you to slow down — you fly past the object and try to get as many pictures as you can in that window," Linares said.

"Studying an interstellar body close-up would revolutionize our understanding of planet formation and evolution," professor of planetary sciences Benjamin Weiss, who is also working on the project, said in the statement.

The slingshots could even allow us to study the feasibility of sending objects to other solar systems, according to Weiss.

More on interstellar objects: NASA: Something Is Off About This Interstellar Comet

Read This Next
But What About Aliens?
Scientists: 'Oumuamua Was Likely a Chunk of a Pluto-Like Planet
Loeb Love
Harvard Astronomer Argues That Aliens Visited Us in 2017
Loeb Strikes Again
Harvard Astronomer Says We Should Hunt for Alien Probes
Night of the Comet
NASA: Something Is Off About This Interstellar Comet
More on Hard Science
Tractor Beam
Jan 26 on the byte
Scientists Build Working Tractor Beam, Although It's Comically Tiny
Having a Blast
Jan 18 on the byte
New Study Shows Where You Should Hide to Survive a Nuclear Attack
Offworld Amino
Jan 15 on the byte
Scientists Find Building Blocks of Life in Meteor That Smashed Into Family's Driveway
READ MORE STORIES ABOUT / Hard Science
Keep up.
Subscribe to our daily newsletter to keep in touch with the subjects shaping our future.
+Social+Newsletter
TopicsAbout UsContact Us
Copyright ©, Camden Media Inc All Rights Reserved. See our User Agreement, Privacy Policy and Data Use Policy. The material on this site may not be reproduced, distributed, transmitted, cached or otherwise used, except with prior written permission of Futurism. Articles may contain affiliate links which enable us to share in the revenue of any purchases made.
Fonts by Typekit and Monotype.