Scientists: 'Oumuamua Was Likely a Chunk of a Pluto-Like Planet

It definitely wasn't a comet. So what the hell was it? 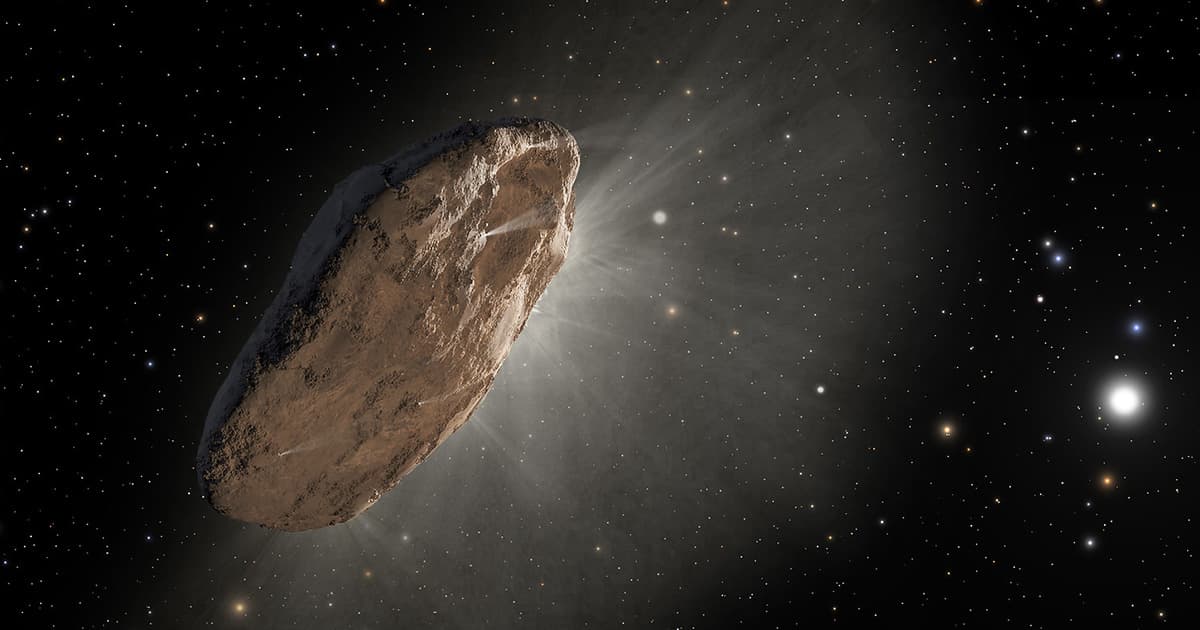 When a Canadian astronomer spotted what appeared to be an object hurtling through the solar system, accelerated by an unknown force back in 2018, the astronomy community didn't know what to make of it.

It didn't have a tail like a comet, seemed to be flat like a pancake or cigar-like in shape, and also appeared to be pushed away from the Sun by an unknown force.

Since then, many scientists have made educated guesses as to what the object, which has since come known to be as 'Oumuamua, actually was and where it came from.

One of the more exotic explanations, offered by Harvard astronomer Avi Loeb, suggested that the object may have been an alien probe sent to us from an extraterrestrial civilization, as detailed in his recently published book "Extraterrestrial: The First Signs of Intelligent Life Beyond Earth."

A new explanation, however, brought forward by Arizona State University astrophysicists Steven Desch and Alan Jackson, suggests something entirely different: that 'Oumuamua was likely a piece of a Pluto-like planet found in another solar system — and not alien technology.

Their research, as detailed in two papers published yesterday in the Journal of Geophysical Research: Planets, concluded that 'Oumuamua's characteristics meant it wasn't a comet and that its lower-than-expected speed suggested it was traveling for less than a billion years.

"In many ways 'Oumuamua resembled a comet, but it was peculiar enough in several ways that mystery surrounded its nature, and speculation ran rampant about what it was," Desch said in a statement.

The pair of astrophysicists got to work, hypothesizing that 'Oumuamua was composed of several different ices and that these ices would turn from solid into gas as it passed by the Sun. After crunching the numbers, they found that this sublimation could account for the "rocket effect," or strange push away from our star.

Previous studies have also suggested that 'Oumuamua may have been a hydrogen-fueled iceberg, accelerated by solar radiation — a hypothesis refuted by Loeb in a subsequent study.

But Desch and Jackson focused their efforts on a different ice. Solid nitrogen in particular ended up being a perfect match, they say, accounting for 'Oumuamua's comet-like behavior.

"That was an exciting moment for us," Desch said. "We realized that a chunk of ice would be much more reflective than people were assuming, which meant it could be smaller. The same rocket effect would then give 'Oumuamua a bigger push, bigger than comets usually experience."

"We knew we had hit on the right idea when we completed the calculation for what albedo (how reflective the body is) would make the motion of 'Oumuamua match the observations," said co-author Jackson, research scientist at ASU. "That value came out as being the same as we observe on the surface of Pluto or Triton, bodies covered in nitrogen ice."

The team suggests chunks of solid nitrogen ice could have been dislodged from a Pluto-like planet and sent hurtling into our solar system.

"It was likely knocked off the surface by an impact about half a billion years ago and thrown out of its parent system," Jackson said.

The hypothesis could also explain 'Oumuamua's pancake-like shape. "Being made of frozen nitrogen also explains the unusual shape of 'Oumuamua," Jackson added.

"As the outer layers of nitrogen ice evaporated, the shape of the body would have become progressively more flattened, just like a bar of soap does as the outer layers get rubbed off through use," he explained.

Desch also commented on Loeb's prominent alien hypothesis. "Everybody is interested in aliens, and it was inevitable that this first object outside the solar system would make people think of aliens," Desch said.

"But it's important in science not to jump to conclusions," he added. "It took two or three years to figure out a natural explanation — a chunk of nitrogen ice — that matches everything we know about 'Oumuamua. That's not that long in science, and far too soon to say we had exhausted all natural explanations."

The astrophysicist went as far as to say that "we've probably resolved the mystery of what 'Oumuamua is," identifying it as an "exo-Pluto" chunk.

But just as we can't rule out an artificial origin story for 'Oumumua, Desch and Jackson's hypothesis will have to remain just that as well: a hypothesis.

More on 'Oumuamua: Avi Loeb and the Great Unknown

Read This Next
Broke Through
Sorry Folks: Signal From Nearest Star Not Alien Civilization, Scientists Say
Loeb Love
Harvard Astronomer Argues That Aliens Visited Us in 2017
Loeb Strikes Again
Harvard Astronomer Says We Should Hunt for Alien Probes
Better Start Digging
Harvard Study: We Shouldn't Rule Out Underground Life on the Moon and Mars
Going Interstellar
NASA Wants to Chase Interstellar Objects With "Orbital Slingshot"
More on Hard Science
Tractor Beam
Thursday on the byte
Scientists Build Working Tractor Beam, Although It's Comically Tiny
Having a Blast
Jan 18 on the byte
New Study Shows Where You Should Hide to Survive a Nuclear Attack
Offworld Amino
Jan 15 on the byte
Scientists Find Building Blocks of Life in Meteor That Smashed Into Family's Driveway
READ MORE STORIES ABOUT / Hard Science
Keep up.
Subscribe to our daily newsletter to keep in touch with the subjects shaping our future.
+Social+Newsletter
TopicsAbout UsContact Us
Copyright ©, Camden Media Inc All Rights Reserved. See our User Agreement, Privacy Policy and Data Use Policy. The material on this site may not be reproduced, distributed, transmitted, cached or otherwise used, except with prior written permission of Futurism. Articles may contain affiliate links which enable us to share in the revenue of any purchases made.
Fonts by Typekit and Monotype.