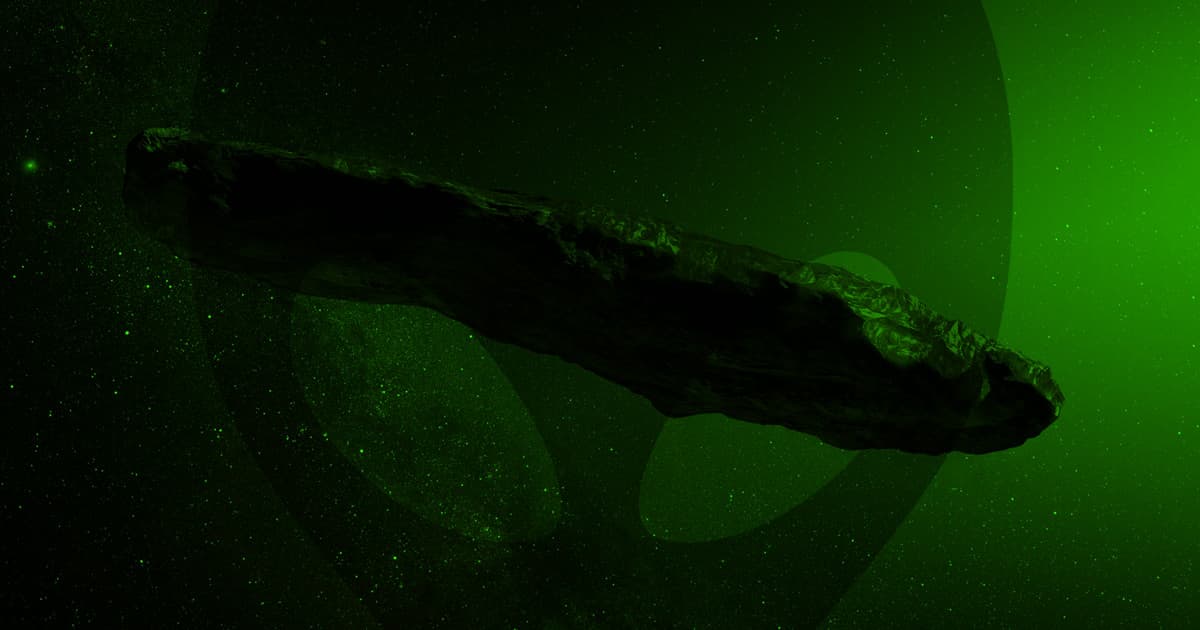 Aliens Still Not Ruled Out

Scientists are still arguing over the origins of this interstellar space rock.

Scientists are still arguing over the origins of this interstellar space rock.

In October 2017, astronomers were puzzled by the arrival of a strangely shaped object about 400 meters in length, which appeared to have entered our solar system at a highly unusual trajectory.

Experts concluded that 'Oumuamua, as it was named later, was an interstellar visitor — kicking off years of speculation about whether or not it's a piece of extraterrestrial technology, visiting from another star system.

Researchers pushing the alien probe hypothesis pointed out that the object appeared to be accelerating with no apparent explanation. But others argued that the acceleration was caused by solar radiation. Another suggested that hydrogen was emanating from it, making it a giant, hydrogen-fuelled iceberg.

Now, in a new study published last week in the Astrophysical Journal Letters, researchers Avi Loeb — Harvard University astrophysicist and strong supporter of the alien hypothesis — and Thiem Hoang from the Korea Astronomy and Space Science Institute, argue that it can't be a massive lump of hydrogen after all.

In other words, as Live Science points out, there's still a chance it's alien tech.

Loeb and Hoang are responding to a June paper that suggested that 'Oumuamua was a comet made up of molecular hydrogen. This hydrogen could be propelling the space rock along, a process that's invisible from Earth.

But there are two big problems to this idea according to Loeb and Hoang: starlight would warm up small chunks of solid hydrogen just enough to stop them from gluing together like a snowman — how comets are usually formed.

They also argue that traveling all the way here from a distant "giant molecular cloud" over hundreds of millions of years would surely make it fall apart, like a snowman in the spring.

More on 'Oumuamua: Interstellar Visitor May Be One of Rarest Objects In Universe

But What About Aliens?
Scientists: 'Oumuamua Was Likely a Chunk of a Pluto-Like Planet
3. 17. 21
Read More
Loeb Love
Harvard Astronomer Argues That Aliens Visited Us in 2017
1. 5. 21
Read More
Going Interstellar
NASA Wants to Chase Interstellar Objects With "Orbital Slingshot"
5. 11. 20
Read More
+Social+Newsletter
TopicsAbout UsContact Us
Copyright ©, Camden Media Inc All Rights Reserved. See our User Agreement, Privacy Policy and Data Use Policy. The material on this site may not be reproduced, distributed, transmitted, cached or otherwise used, except with prior written permission of Futurism. Articles may contain affiliate links which enable us to share in the revenue of any purchases made.
Fonts by Typekit and Monotype.