Avi Loeb and the Great Unknown

The Harvard professor who thinks an alien probe visited our star system in 2017 has a message for the academic community. 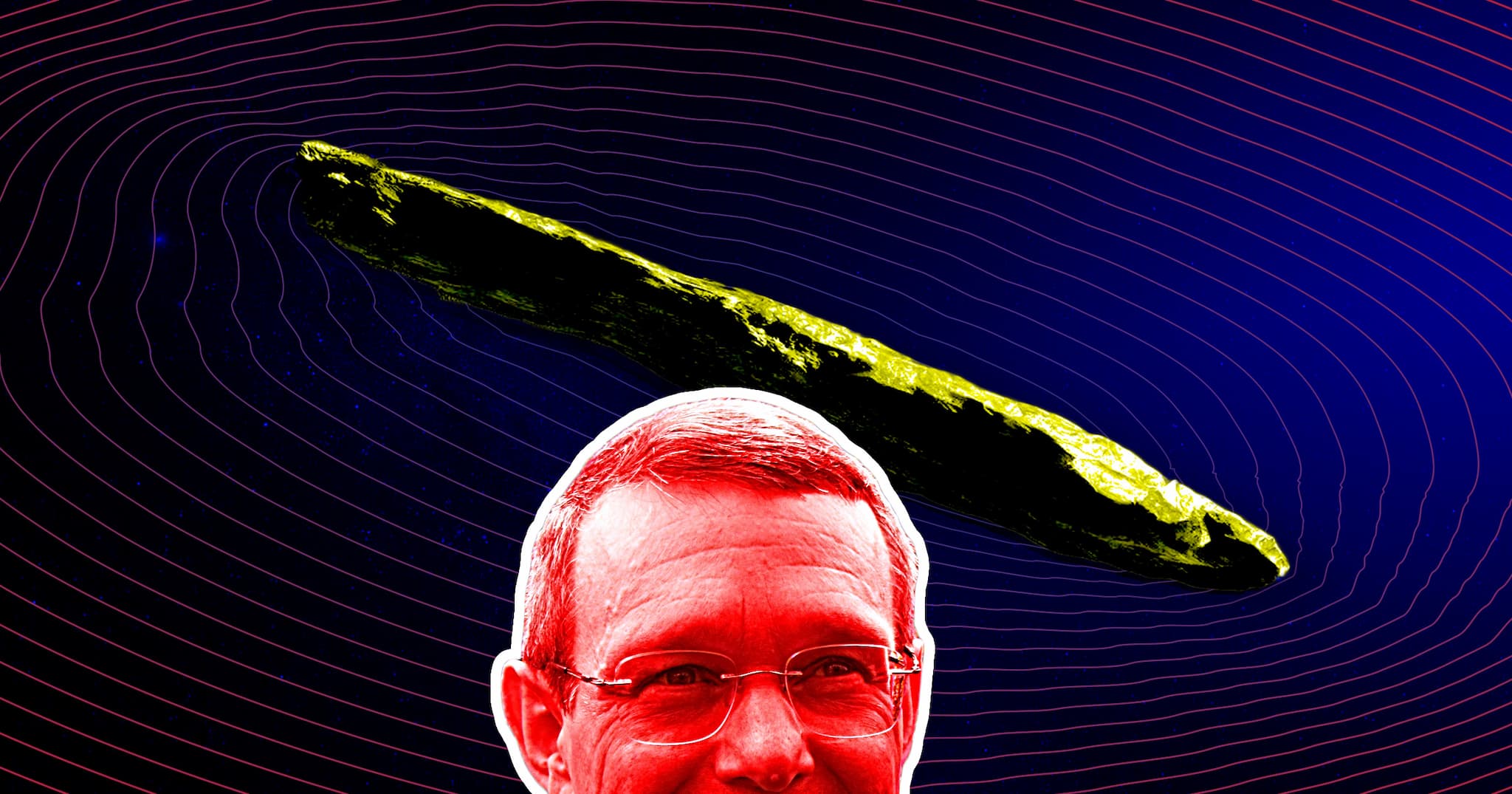 It was an otherwise non-notable day in October 2017 when Canadian astronomer Robert Weryk made an astonishing discovery.

Thanks to data from the University of Hawaii’s Pan-STARRS1 telescope at the Haleakala Observatory in Hawaii, Weryk spotted an unusual object, oblong and approximately the size of a football field, screaming through the solar system at 196,000 miles per hour. Strangest of all was that it seemed to be accelerating slightly, pushed by an invisible force that has yet to be fully explained.

Its highly unusual trajectory caused it to slingshot past our Sun, leading scientists to believe that the space object — later dubbed "'Oumuamua," or "scout" in Hawaiian — was the first ever visitor from outside our solar system to be observed directly.

Over the last three years, countless attempts have been made to explain 'Oumuamua's unprecedented characteristics. Some speculated that it was hydrogen iceberg, while others suggested it was a traveling space rock covered in a layer of "organic sunscreen."

To Avi Loeb, astrophysicist and professor of science at Harvard University, the answer could be a tantalizing one. His controversial argument is that 'Oumuamua may have been a probe sent by an extraterrestrial civilization — an explanation that's garnered enormous attention in the media and, unsurprisingly, proved divisive among experts.

In his new book, titled "Extraterrestrial: The First Sign of Intelligent Life Beyond Earth," Loeb explores his provocative hypothesis, using the story of 'Oumuamua to lay the groundwork of a much greater conversation: the struggle to be taken seriously within a scientific community that has historically held the search for extraterrestrial intelligence at arm's length.

During an interview with Futurism, Loeb argued that scientists' explanations fell short of explaining 'Oumuamua's many quirks and eccentricities. The scientific community "advocated for something that we have never seen before," he said.

One example of this was what Loeb referred to as the "dust bunny" hypothesis, which theorized that 'Oumuamua's odd trajectory could be explained by a very low density.

"The problem with that is I don't think something of the size of a football field that is a dust bunny would survive a journey of millions of years through interstellar space," Loeb said, vacuuming up that hypothesis. "I mean, I just don't think that it can hold itself together."

"The point is, you can't on the one hand say it's natural," Loeb argued, "and then whenever you try to actually explain it with natural processes, you come up with something that we have never seen before."

And that's how he ended up at aliens.

At the root of Loeb's alien theory is that 'Oumuamua may have been a solar sail sent to us from another star system.

In the simplest terms, a solar or light sail is a form of spacecraft propulsion that turns the low pressure of solar radiation into movement.  Earthling scientists have already experimented with the concept; in 2019, the non-profit Planetary Society launched a craft called LightSail-2, which uses 340 square feet of an extremely thin layer of reflective polyester film to gradually propel itself.

To Loeb, a solar sail being pushed by starlight could explain 'Oumuamua's unexpected acceleration. If it's solid and isn't a dust bunny, the astrophysicist concluded that the interstellar visitor must also be shockingly thin — perhaps, according to his calculations, "less than a millimeter thick."

To the astronomer, the solar sail conclusion was following "footsteps, just like detective Sherlock Holmes. When you rule out all other possibilities, whatever you're left with must be the truth."

That conclusion is a stretch to many astronomers in the field, who have repeatedly challenged Loeb's conclusion.

In a 2019 study published in the journal Nature Astronomy, an international team of researchers argued that they found "no compelling evidence to favor an alien explanation" for 'Oumuamua.

"‘Oumuamua’s properties are consistent with a natural origin," University of Maryland astronomer Matthew Knight, co-author of the study, told Reuters at the time, "and an alien explanation is unwarranted."

Their argument was that 'Oumuamua is a "planetesimal," or a small fragment of a planetary building block that just happened to drift through our star system.

Weryk, who discovered the object in the first place, had no kind words for Loeb's hypothesis. "Honestly, that's a bit of wild speculation," he told the CBC in 2018.

"I think it's a remnant from another solar system," Weryk added. "It's just something that happened to run into us, and we were very lucky to have been operating the telescope that night and looking in that direction."

These rebuttals appear to have only emboldened Loeb's investigations into the alien origins of 'Oumuamua — as well as leading him to make a passionate plea to the scientific community, as outlined in his book, to take SETI research seriously.

To Loeb, it's all about reading the stars with an open mind.

"My guiding principle is modesty," he told Futurism. "If we are not arrogant, if we are modest, we would say that life, the way we have it, must be common."

"We now know from the Kepler satellite data that about half of the Sun-like stars have a planet like the Earth, roughly at the same distance, so that it can have liquid water and the chemistry of life as we know it," Loeb said, referring to the "habitable zone" of a star system within which life can theoretically could be supported.

"So we know that the dice was rolled billions of times in the galaxy," he said. "And if you arrange for similar circumstances like we have on Earth, you would get a similar outcome."

To Loeb, this simple calculation is "conservative, not speculative," and that it "should be the mainstream view." But proposing that we are not alone in the universe is seen as a "fringe view and the mainstream claims there should be a taboo."

"The scientific community can address a topic even if other people address it in a way that is not scientific and doesn't make much sense," Loeb argued.

"So my point is the existence of the literature on science fiction or the existence of unsubstantiated UFO reports should not eliminate this subject from being part of the mainstream discussion," he added.

In fact, Loeb contended that it is less speculative than other areas of study, from the study of dark matter to multiverse and string theories.

"All of these hypothetical concept for which we have no basis," he said. "And you have communities of hundreds of scientists working on giving each other awards and honors and so forth," he added in a slightly derisive tone.

To him, the refusal to believe we are not alone in the universe is a vicious cycle of self-fulfilling prophecies.

"When you put blinders on, you're not searching for anyone else, you might think that you're special," he said.

"The only way to break that taboo, to break that state of mind, is to find evidence for others," Loeb argued. "But, if you don't search, you will never find it," closing the cycle.

Worst of all, a lack of funding for SETI research only ends up deterring "young people from entering this field," Loeb said.

So the search for life beyond the Earth must go on — and Loeb has plenty of ideas on how to do so.

Arguably the most ambitious plan he's involved with, a project called Breakthrough Starshot, is a proof-of-concept interstellar probe project by Breakthrough Initiatives that involves sending an army of small light sails called Starchips as far as Alpha Centauri, the closest star system to our own at just over four light years away.

Four light year may not sound like much on paper, but the distances that the sails would have to cover are immense. Rather than harnessing the solar radiation from the Sun, the project is investigating if we can shoot an extremely powerful laser at these spacecraft from here on Earth to provide enough acceleration.

It's an endeavor that involves near-insurmountable hurdles. In fact, Loeb isn't sure if the Starshot project will materialize in his lifetime — and Breakthrough Initiatives estimates that it could take 20 years for the mission to reach Alpha Centauri after launch.

"But I think we have to do it as a civilization," Loeb told Futurism. "We have to go in that direction and consider how to visit other stars, because currently all our eggs are in one basket here on Earth and we can't ignore the risk from a catastrophe."

Editor's note 2/8/2021: This story originally misstated the name of the observatory that first observed 'Oumuamua. It has been updated.

Read This Next
Avi Update
Harvard Professor Defends Claim That Alien Spacecraft Cruised Through Solar System
Outing Life
Swiss Government Scientist Says We May Be on the Brink of Discovering Alien Life
Aquatic Aliens
Experts Puzzled by Harvard Scientist Looking for Alien Wreckage in Ocean
Sun Gazer
Researchers Want to Use the Sun As a Giant Telescope to Look for Aliens
Sky Eye
Sorry, But New Signal Is Definitely Not Aliens, Says Scientist Working on Project
More on Off World
Watery Grave
Nov 22 on the byte
Chinese Military Forcefully Seizes Debris That Philippines Recovered After It Fell From Space
Jetsam
Nov 22 on the byte
Lunar Lander Released by NASA’s Artemis 1 Mission Dies
Not Not Accurate
Nov 21 on the byte
Bad Guy in New "Indiana Jones" Movie Is Nazi Who Works at NASA
READ MORE STORIES ABOUT / Off World
Keep up.
Subscribe to our daily newsletter to keep in touch with the subjects shaping our future.
+Social+Newsletter
TopicsAbout UsContact Us
Copyright ©, Camden Media Inc All Rights Reserved. See our User Agreement, Privacy Policy and Data Use Policy. The material on this site may not be reproduced, distributed, transmitted, cached or otherwise used, except with prior written permission of Futurism. Articles may contain affiliate links which enable us to share in the revenue of any purchases made.
Fonts by Typekit and Monotype.