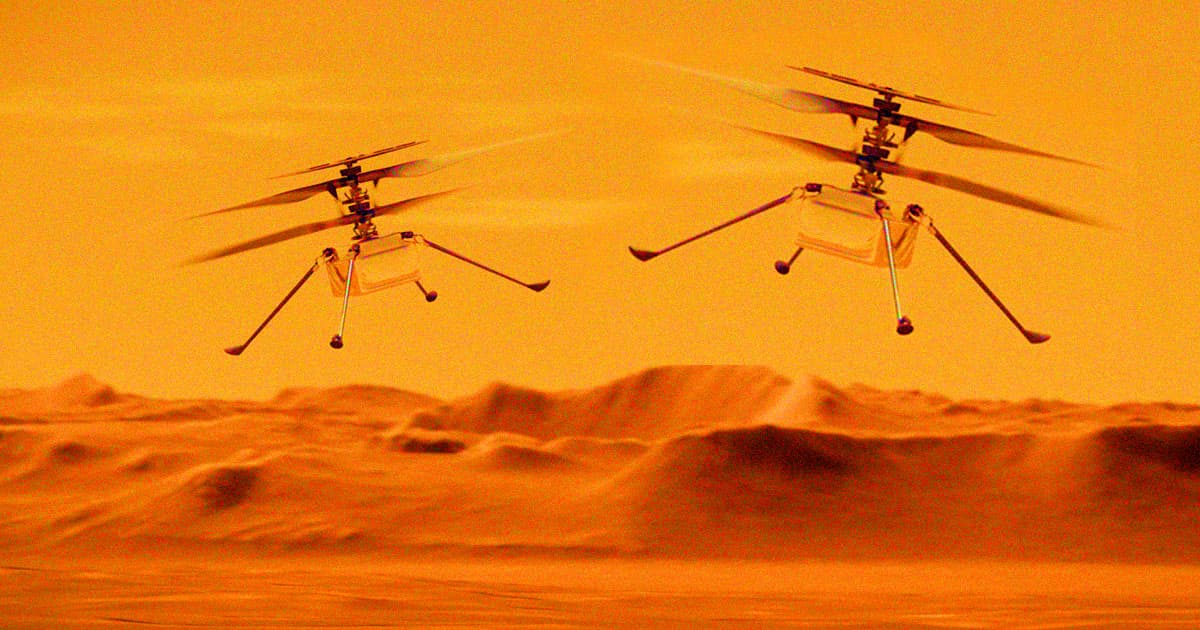 It's an ingenious plan.

It's an ingenious plan.

NASA announced on Wednesday that it plans to send two more Ingenuity-class helicopters to Mars onboard its upcoming Sample Retrieval Lander.

That’s in light of the overwhelming success of the agency's ongoing Mars Ingenuity helicopter mission. It may be on its last legs now, but the small rotorcraft’s lasted way longer than anticipated, proving once and for all that using a helicopter on Mars is a more-than-viable way to explore, accomplishing 29 successful flights so far.

With the remarkable deployment of NASA’s Perseverance Rover on the Red Planet — Ingenuity's much larger, six-wheeled companion — the long-term mission of bringing the first Martian sample back to Earth is firmly underway.

But while Perseverance has already drilled and collected eleven samples to date, it can’t complete the retrieval mission on its own. That’s where NASA’s newfangled helicopters come into play.

Originally, a separate rover was going to be used to ferry samples between Perseverance and the Sample Retrieval Launcher. But there’s been a change of plans, and NASA says Perseverance will do the ferrying itself, no extra rover required.

Instead, the two helicopters will be used as a secondary method of retrieving the samples.

The plan is to have either Perseverance or the helicopters bring Martian rock samples to a Sample Retrieval Lander. Then, a robotic arm on the lander will load the samples into a Mars Ascent Vehicle (MAV), a small rocket that could become the first manmade object to take off from the Martian surface.

From there, the MAV will deliver the payload to the Earth Return Orbiter, which will take the samples back to our watery world.

Don't hold your breath for them to be here anytime soon, though: NASA says the orbiter won't be back with its Martian loot until at least 2033, assuming all goes to plan.

Once the samples get here, it'll mark a momentous step forward in our understanding of the Red Planet's history, and more — assuming the samples won't unleash a world-ending Martian plague back on Earth.

So Beautiful
NASA's Stunning Image: Supersonic Shockwaves Smashing Together
3. 9. 19
Read More
Elon Musk's Idea for City-to-City Rockets Just Might Work
10. 27. 17
Read More
NASA Developed an X-Plane that Can Go Supersonic Without a Boom
7. 26. 17
Read More
+Social+Newsletter
TopicsAbout UsContact Us
Copyright ©, Camden Media Inc All Rights Reserved. See our User Agreement, Privacy Policy and Data Use Policy. The material on this site may not be reproduced, distributed, transmitted, cached or otherwise used, except with prior written permission of Futurism. Fonts by Typekit and Monotype.