"We never dreamt that it would be this clear, this beautiful." 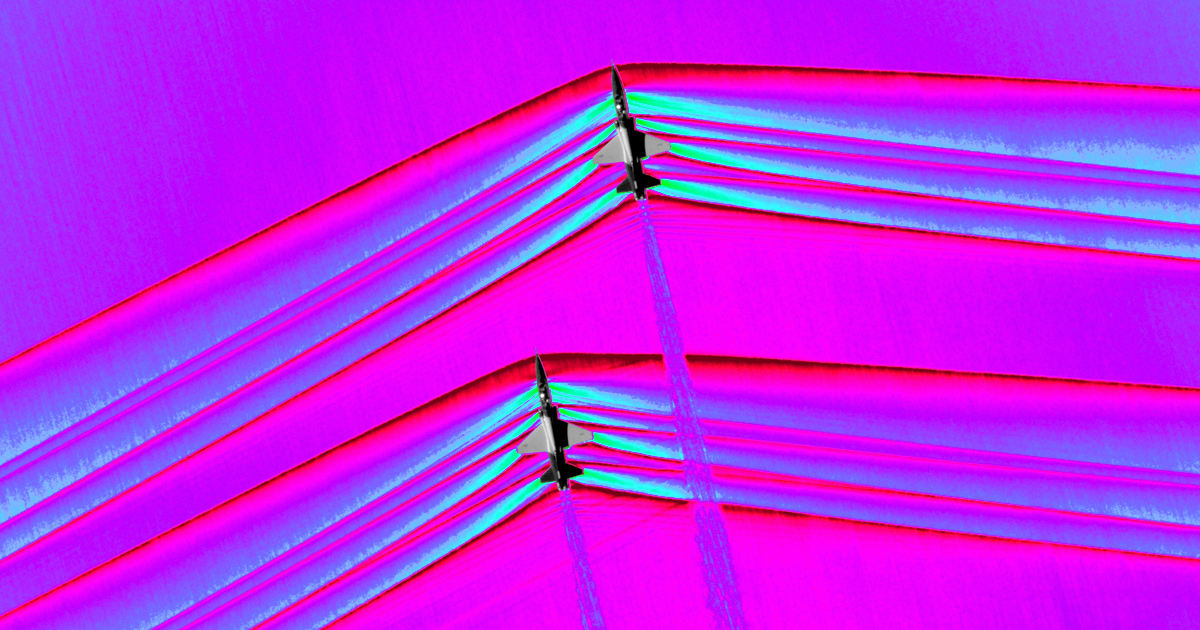 NASA engineers have captured the first images of the interaction between shockwaves from a pair of flying supersonic aircraft — and they are stunning.

"We’re seeing a level of physical detail here that I don’t think anybody has ever seen before," senior research engineer Dan Banks said in a NASA press release. "Just looking at the data for the first time, I think things worked out better than we’d imagined."

"We never dreamt that it would be this clear, this beautiful," physical scientist J.T. Heineck added.

When an object moves faster than the speed of sound, it causes rapid air pressure changes called shockwaves.

To record the interaction between shockwaves from two craft, NASA had two T-38 jets from the U.S. Air Force Test Pilot School at Edwards Air Force Base fly at supersonic speeds, with one jet about 30 feet behind and 10 feet below the other.

NASA then flew a B-200 King Air aircraft in a holding pattern at an altitude of approximately 30,000 feet. Using a special recording system, including a camera capable of recording 1,400 frames per second, the team then captured footage of the two T-38s as they passed about 2,000 feet below the B-200 at supersonic speeds.

"The biggest challenge was trying to get the timing correct to make sure we could get these images," sub-project manager Heather Maliska said. "I’m absolutely happy with how the team was able to pull this off... They were rock stars."

When shockwaves merge, they produce sonic booms, loud noises that are one of the reasons supersonic flight is currently restricted over land. NASA is developing a craft called the X-59 Quiet SuperSonic Technology X-plane that's designed to fly at supersonic speeds without producing any sonic booms — just a quiet rumble.

However, if NASA hopes to convince regulators to change existing restrictions on supersonic flight over land — and enable travelers to get from one part of the U.S. to the other far more quickly —  they'll need to be able to produce highly detailed, statistically sound images of the upcoming X-59 demonstrations.

And now, the agency knows it has an imaging system capable of producing those photos.

"I am ecstatic about how these images turned out," Heineck said in the news release. "With this upgraded system, we have, by an order of magnitude, improved both the speed and quality of our imagery from previous research."

More on the X-59: NASA Starts Tests to Prepare for Flight of “Quiet” Supersonic Jet

Read This Next
Futurism
We Are Witnessing the Return of Supersonic Travel
Futurism
Elon Musk's Idea for City-to-City Rockets Just Might Work
Futurism
This Material Could Allow NASA Planes to Cross the Country in Under an Hour
Futurism
NASA Developed an X-Plane that Can Go Supersonic Without a Boom
Futurism
NASA's Mars Rover Concept Looks Like the Batmobile
More on Advanced Transport
High Tide
Jan 27 on the byte
We’re in Awe of Amsterdam’s Huge Underwater Bike Parking Garage
Quelle Surprise!
Jan 26 on the byte
Of Course Elon Musk Is Pushing The Cybertruck Back Again, What Did You Expect?
Stay Away
Jan 25 on the byte
New SUV Features Electrified Door Handles and Pepper Spray Guns
READ MORE STORIES ABOUT / Advanced Transport
Keep up.
Subscribe to our daily newsletter to keep in touch with the subjects shaping our future.
+Social+Newsletter
TopicsAbout UsContact Us
Copyright ©, Camden Media Inc All Rights Reserved. See our User Agreement, Privacy Policy and Data Use Policy. The material on this site may not be reproduced, distributed, transmitted, cached or otherwise used, except with prior written permission of Futurism. Articles may contain affiliate links which enable us to share in the revenue of any purchases made.
Fonts by Typekit and Monotype.