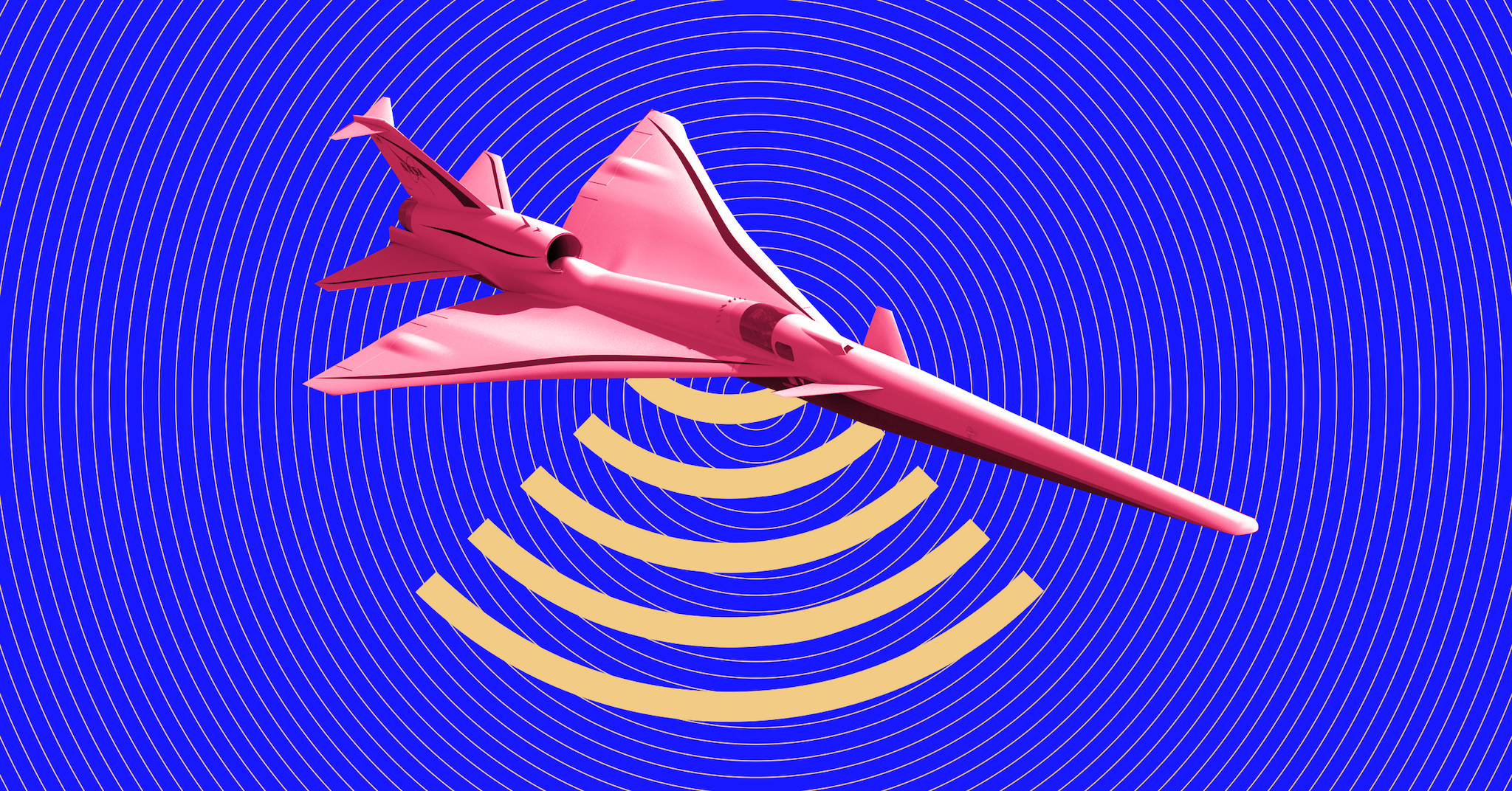 The Digest: NASA Starts Tests to Prepare For Flight of "Quiet" Supersonic Jet

The aircraft would turn a disruptive sonic boom into a subtle sonic thump.

The aircraft would turn a disruptive sonic boom into a subtle sonic thump.

WHAT GOES UP REALLY FAST... On Friday, NASA released a video of an Armstrong Flight Research Center test pilot flying an F/A-18 high into the sky and straight back toward the Earth again at more than the speed of sound (767 miles per hour).

The goal wasn't to test the pilot's stomach, though — the maneuver simulates the sonic "thumps" NASA's supersonic jet, the X-59, would generate when in use and flying parallel to the ground. These tests allow NASA to gather data on the ground about the sound the aircraft makes so that, someday, the X-59 (or something like it) could be allowed to fly.

SUPER FAST. SUPER NOISY. In 1973, the U.S. banned supersonic travel over land. The reason? It was just too loud.

Anytime an aircraft exceeds the speed of sound, it creates what's known as a sonic boom. Like a boat pushing aside water as it travels, a supersonic aircraft quickly pushes aside air molecules. This builds up pressure in the molecules and causes shock waves. These shock waves extend behind the craft in two ever-widening cone shapes, one from its front and one from its rear.

The pressure of the molecules releases at the end of each cone, causing a "boom" sound the entire time. When those ends reach the ground, we hear the trademark "boom-boom" of a supersonic jet.

FROM BOOM-BOOM TO THUMP-THUMP. If commercial airplanes were allowed to fly at supersonic speeds, it could dramatically reduce the time it takes to fly from one place to another. Unwilling to give up this possible future, engineers are taking on the task to make a quieter supersonic jet.

In 2016, NASA awarded Lockheed Martin $20 million to work on a quieter supersonic jet. The aircraft they created, now called the X-59, is able to be super quiet and also supersonic thanks to its design — the shape of the X-59's body affects the shape of the shockwaves. This transforms what would normally sound like two sonic booms into a pair of "thumps" — at least, that's how it would work in theory. In April, NASA gave Lockheed Martin $247.5 million to actually build the X-59, but it isn't expected to deliver the craft until the end of 2021.

For now, NASA will continue testing the quiet sonic booms generated by the F/A-18's daredevil maneuver through a series of flights scheduled for November over Galveston, Texas. During those tests, the agency is planning to have volunteers on the ground let them know what they hear.

So Beautiful
NASA's Stunning Image: Supersonic Shockwaves Smashing Together
3. 9. 19
Read More
We Are Witnessing the Return of Supersonic Travel
12. 10. 17
Read More
Elon Musk's Idea for City-to-City Rockets Just Might Work
10. 27. 17
Read More
+Social+Newsletter
TopicsAbout UsContact Us
Copyright ©, Camden Media Inc All Rights Reserved. See our User Agreement, Privacy Policy and Data Use Policy. The material on this site may not be reproduced, distributed, transmitted, cached or otherwise used, except with prior written permission of Futurism. Fonts by Typekit and Monotype.