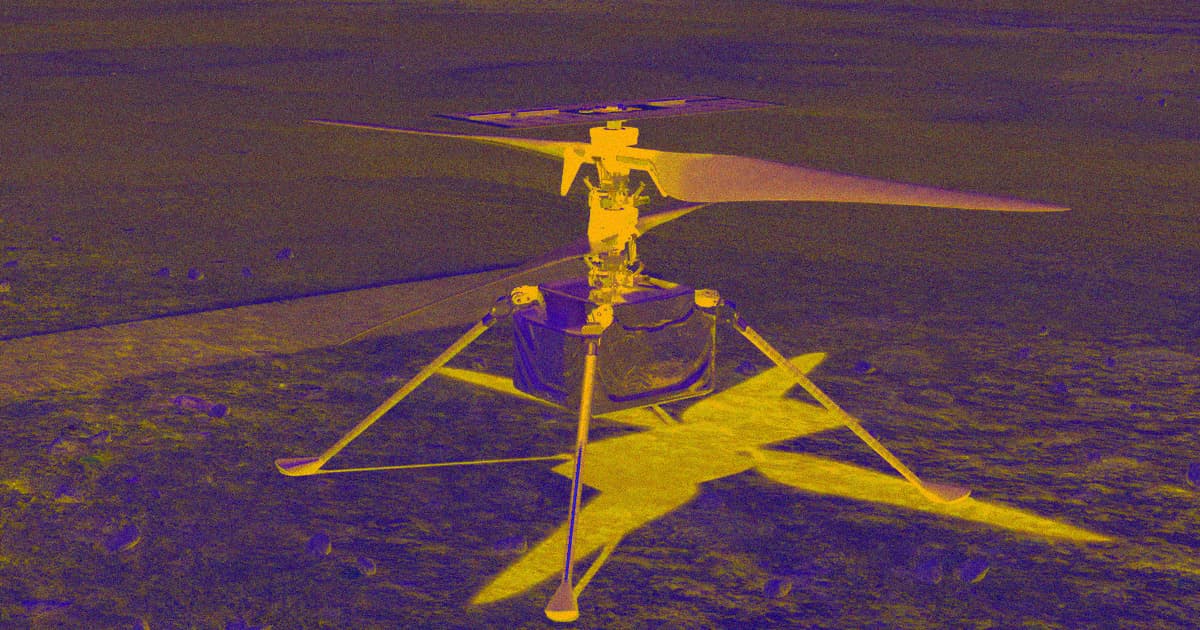 Its record-breaking ninth flight was one "big leap."

Its record-breaking ninth flight was one "big leap."

NASA's groundbreaking Ingenuity Mars Helicopter has sent back stunning photos it took on July 5 while flying over the Red Planet's rocky landscape — and this time, they're in color.

The helicopter took off for its ninth flight on Monday, breaking the small four pound rotorcraft's "records for flight duration and cruise speed," according to a July 7 blog update written by Ingenuity chief pilot Håvard Grip. It also "nearly quadrupled the distance flown between two airfields," spanning 2,051 feet of challenging terrain.

While in the air, Ingenuity took a series of stunning images, showing a multicolored landscape and tracks left behind by NASA's Perseverance rover.

"This was a big leap — big leap — in terms of what we’ve done before," Grip told The Verge.

Mars from the air is amazing.

These images were taken by #Ingenuity on July 5, 2021 (sol 133), during the #MarsHelicopter's 9th flight on Mars. Check out those amazing rover tracks and rock formations!

It was the first time Ingenuity didn't fly over largely flat terrain, making the latest flight harrowing for the team controlling the copter from NASA's Jet Propulsion Lab. While flying, Ingenuity's navigation system relies on scanning the ground below it to identify its location.

"Differences in terrain height will cause features to move across the field of view at different rates, and Ingenuity’s navigation algorithm still 'assumes' the ground below is flat," Grip wrote in his post. " It does its best to explain the movement of the features by changes in the helicopter’s movements, which can lead to errors."

The color images show "outcrops that show contacts between the major geologic units on Jezero Crater’s floor," according to the lead pilot, and a "a system of fractures the Perseverance team calls 'Raised Ridges,' which the rover’s scientists hope to visit." Scientists believe the Jezero Crater is a dried up bed of an ancient lake, making it a particularly interesting region for looking for signs of life.

The images are a critical part of scientific operations, because Perseverance may not have the time to look at some of these larger outcrops.

READ MORE: Flight 9 Was a Nail-Biter, but Ingenuity Came Through With Flying Colors [NASA]