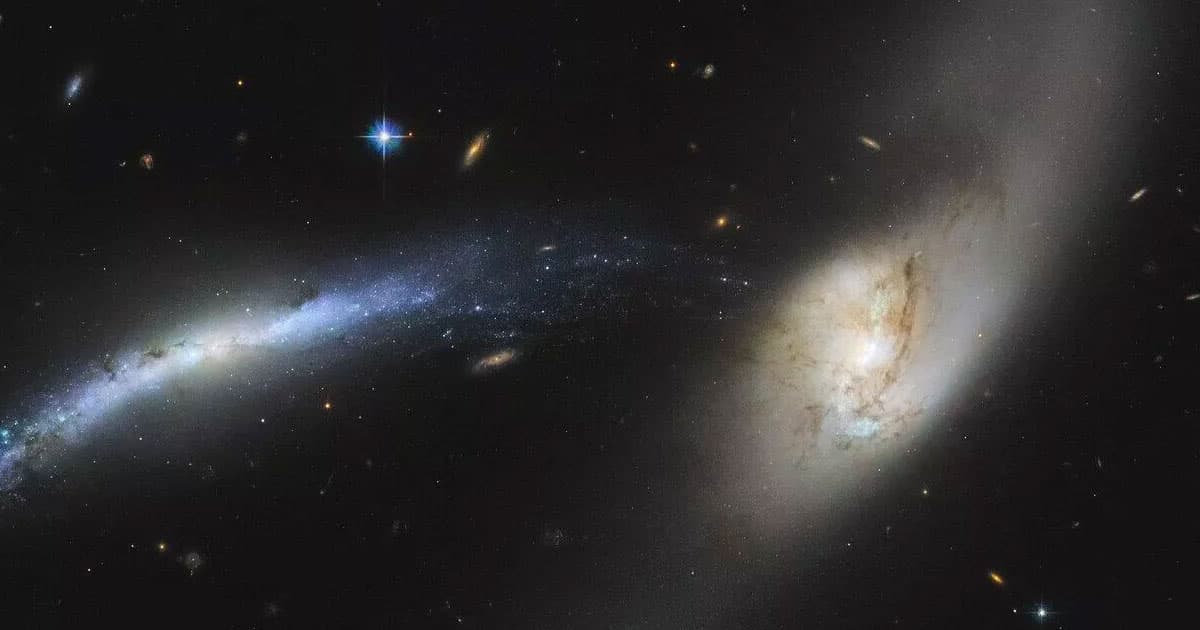 One galaxy is dripping individual stars like drops of water into the center of the other.

One galaxy is dripping individual stars like drops of water into the center of the other.

The Hubble Space Telescope just captured a spectacular new image of two galaxies starting to be pulled towards the center of another.

The two galaxies, NGC 2799 and NCG 2798, have already formed a "waterspout" showing one galaxy dripping individual stars like drops of water into the center of the other.

The merging of two galaxies is a process that can take a very, very long time — up to billions of years. Thanks to the ample space between stars, the merger itself isn't a violent process with stars typically just passing each other by.

Previous research indicates that the black holes at the centers of merging galaxies end up merging themselves, a hint as to why certain black holes can grow so large.

Astronomers theorize that our very own Milky Way is on a collision course with the Andromeda Galaxy, with the latter approaching the other at about 110 kilometers per second. While that sounds a lot, scientists predict such a collision will occur only in about 4.5 billion years.

More on galactic mergers: When Galaxies Merge, The Black Holes In Their Hearts Fuse Together

Yuge
Scientists Discover Enormous Black Hole Right Near Our Galaxy
12. 4. 21
Read More
Dark Matter Mystery
Dark Matter's Effect Is 10x What It Should Be, Scientists Say
9. 11. 20
Read More
Hubble Discovery Suggests We May Need New Physics to Explain Dark Matter
10. 27. 17
Read More
+Social+Newsletter
TopicsAbout UsContact Us
Copyright ©, Camden Media Inc All Rights Reserved. See our User Agreement, Privacy Policy and Data Use Policy. The material on this site may not be reproduced, distributed, transmitted, cached or otherwise used, except with prior written permission of Futurism. Articles may contain affiliate links which enable us to share in the revenue of any purchases made.
Fonts by Typekit and Monotype.