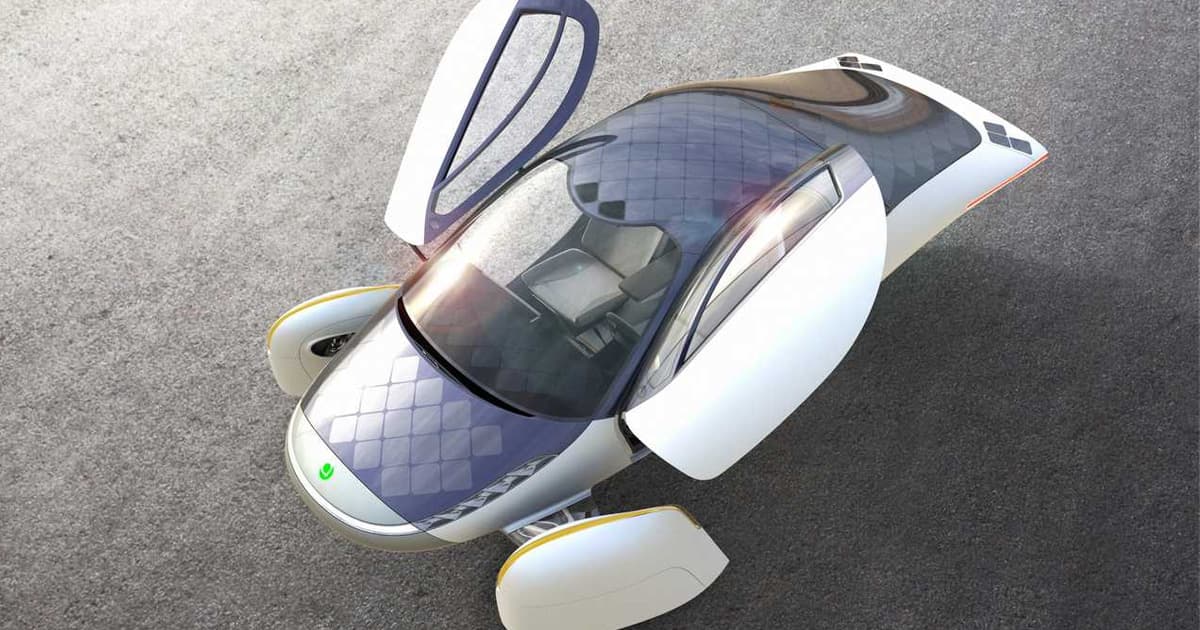 The electric car company Aptera Motors is back from the dead — and it claims to have built a vehicle which, in theory, never need to be charged up, thanks to banks of solar panels on its roof and hood.

Of course, there are a lot of caveats and footnotes on the claim, as The Verge reports, and we'll get into those. But assuming that the solar panels work moderately well, the Aptera could present something on the road to a solution to the longstanding issues of electric vehicle battery range, one of the main hurdles blocking a widespread transition to electric cars.

Aptera isn't claiming to have built a perpetual motion device, or that the three-wheeled vehicle's battery can never run out of juice.

Rather, the company says in a press release that the vehicle has an extraordinary 1,000-mile range per charge, factoring in its solar panels adding 45 miles' worth of juice on sunny days. Banking on the assumption that a typical driver will travel less than that, the Aptera could feasibly last for a long time without needing to stop at a real charging station.

As a company, Aptera has had trouble getting its unusual design onto the street. After its cars were first certified by the Department of Energy back in 2009, the company closed its doors in 2011 after being unable to secure a loan, according to The Verge.

Now it's trying again and accepting pre-orders for its Paradigm and Paradigm Plus models, which The Verge notes could cost a painful $46,000.

READ MORE: Aptera is back with a new EV it says doesn’t need charging [The Verge]

More on electric vehicles: Report: Electric Vehicles Cost Half as Much to Maintain

Read This Next
Charged Up
Startup Says Amazing New Battery Lets EVs Drive 400 Miles, Recharge in 15 Minutes
Range Serenity
Ford's Electric F-150 Is Poised to Change the Entire EV Market
Empty Seat
Waymo Ditches Human Safety Drivers in Its Self-Driving Taxis
How the Turntables
Tesla Is Now Worth More Than ExxonMobil
Ride the Lightning
This Scientist Says He's Built a Jet Engine That Turns Electricity Directly Into Thrust
More on Advanced Transport
Jerk Move
Yesterday on the byte
Ex-Tesla Employee Says He Was Fired by Phone Call, While on Vacation
Making Batteries
Yesterday on the byte
Those Headlines About Tesla Losing the Top EV Seller Spot Are Pretty Sketchy
Shiny!
Tuesday on the byte
Beautiful Render Shows Starship With Full NASA Paint Job
READ MORE STORIES ABOUT / Advanced Transport
Keep up.
Subscribe to our daily newsletter to keep in touch with the subjects shaping our future.
+Social+Newsletter
TopicsAbout UsContact Us
Copyright ©, Camden Media Inc All Rights Reserved. See our User Agreement, Privacy Policy and Data Use Policy. The material on this site may not be reproduced, distributed, transmitted, cached or otherwise used, except with prior written permission of Futurism. Fonts by Typekit and Monotype.