If this plasma propulsion tech is real, it could change everything. 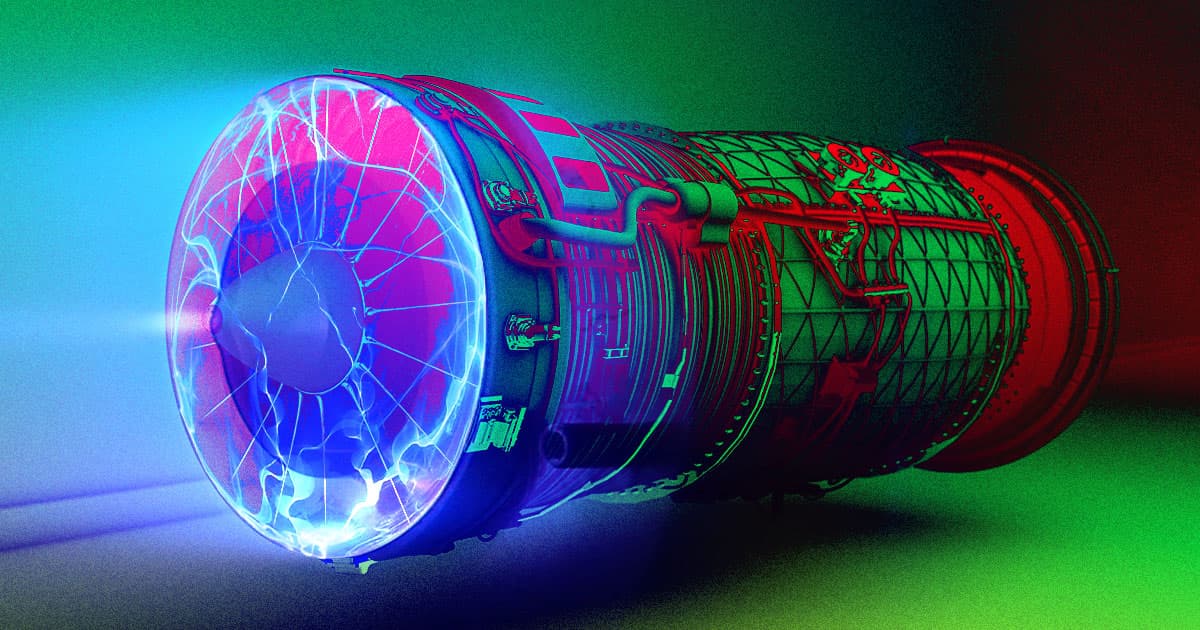 This past autumn, a professor at Wuhan University named Jau Tang was hard at work piecing together a thruster prototype that, at first, sounds too good to be true.

The basic idea, he said in an interview, is that his device turns electricity directly into thrust — no fossil fuels required — by using microwaves to energize compressed air into a plasma state and shooting it out like a jet. Tang suggested, without a hint of self-aggrandizement, that it could likely be scaled up enough to fly large commercial passenger planes. Eventually, he says, it might even power spaceships.

Needless to say, these are grandiose claims. A thruster that doesn’t require tanks of fuel sounds suspiciously like science fiction — like the jets on Iron Man’s suit in the Marvel movies, for instance, or the thrusters that allow Doc Brown’s DeLorean to fly in “Back to the Future.”

But in Tang’s telling, his invention — let’s just call it a Tang Jet, which he worked on with Wuhan University collaborators Dan Ye and Jun Li — could have civilization-shifting potential here in the non-fictional world.

"Essentially, the goal of this technology is to try and use electricity and air to replace gasoline," he said. "Global warming is a major threat to human civilization. Fossil fuel-free technology using microwave air plasma could be a solution."

He anticipates this happening fast. In two years, he says, he thinks Tang Jets could power drones. In a decade, he’d like to see them fly a whole airplane.

That would all be awesome, obviously. But it’s difficult to evaluate whether Tang’s invention could ever scale up enough to become practical. And even if it did, there would be substantial energy requirements that could doom aerospace applications.

One thing’s for sure: If the tech works the way he hopes, the world will never be the same.

He’s held several professorships, done research at Caltech and Bell Laboratories, published scores of widely-cited papers, edited several scientific journals, and won a variety of awards. He holds a U.S. patent for a device he calls a “synchrotron shutter," designed to capture electrons traveling near the speed of light.

Tang says he first stumbled onto the idea for the plasma thruster when he was trying to create synthetic diamonds. As he tried to grow them using microwaves, he recalls, he started to wonder whether the same technology could be used to produce thrust.

Other huge stories, like the coronavirus pandemic and the baffling saga of Elon Musk naming his baby “X Æ A-12,” were sucking a lot of oxygen out of the news cycle in early May, when Tang announced his invention to the world. A few outlets picked up Tang’s story, including New Atlas, Popular Mechanics, and Ars Technica, but no journalist appears to have actually talked to him.

Because of that, there was little fanfare surrounding the sheer scope of his ambition for the technology — and it went overlooked that Tang sometimes sounds as though he’s invented a hammer and is now seeing a lot of things as nails.

After describing his plans to conquer aerospace with his new thruster, for instance, he starts to describe plans to take on the automotive industry as well — with jet-powered electric cars.

"I think the jet engine is more efficient than the electric motor, you can drive a car at much faster speeds," he mused. "That's what I have in mind: to combine the plasma jet engine with a turbine to drive a car.”

But you wouldn’t want to drive behind it, he warned, because you could be scorched by its fiery jet stream.

Over the course of our interview, Tang also brought up the possibilities of using the technology to build projectile weapons, launch spaceships, power boats, and even create a new type of stove for cooking. On that last point, Tang said that he’s already built a prototype kitchen stove powered by a microwave air plasma torch — but it’s so deafeningly loud that it sounds like a constant lightning strike.

Technically, the Tang Jet is an attempt to build a “plasma thruster,” a concept that's periodically gained attention in scientific circles. Michael Heil, a retired aerospace and propulsion engineer with a long career of Air Force and NASA research, told Futurism that Tang’s research reminds him of several other attempts to build air propulsion tech that he’s encountered over the years.

Plasma thrusters like those that would power a Tang Jet have been around for a while. NASA first launched a satellite equipped with plasma thrusters back in 2006, but its capabilities are a far cry from what Tang is proposing with his research.

Engineers have long dreamed of a plasma jet-powered plane, but every attempt has been smacked down by the technological limitations of the day. For example, New Scientist reported in 2017 that a team from Electrofluidsystems in Berlin attempted to build a similar thruster — but like every attempt over the previous decade, their work never became useful outside of the lab.

The problems with these attempts aren’t so much faults with the theory — the concept of generating thrust with a plasma torch is fairly sound. Rather, issues begin to pop up when working out the logistics of building a vehicle that actually works.

Tang has little interest in commercializing the jet himself. Instead, he wants to demonstrate its merits in hopes that well-funded government leaders or titans of industry will be inspired to take the ideas and run with them.

"The steps toward realization of a full plasma jet engine would cost lots of money, time and energy," he said. "Such investment is beyond our present resources. Such tasks should be taken by aerospace industries or governmental agencies."

That's a common mindset for scientists, said Christopher Combs, an aerodynamics researcher at the University of Texas at San Antonio.

"That's what us academics do, we figure out the physics and say 'Well I don't want to make a product,'" he told Futurism. "It's kind of a common refrain to see people in academia who have had something that gets a lot of attention."

Though he’s intrigued by the underlying principles of the Tang Jet, Combs says it’s unlikely that it will scale up to the size needed to lift a plane — in other words, the same challenges that proved insurmountable to previous plasma thrusters will rear their heads once again. The current prototype, for perspective, only produces about 10 Newtons of thrust — about the same as a medium-sized model rocket.

"You're talking about scaling something by five orders of magnitude — more than 100,000 times!" Combs said. "Which almost never works linearly. Lots of engineering happens in the middle."

And even if it were to scale perfectly, there’s the issue of power. Iron Man’s suit was powered by an “Arc Reactor,” and the flying DeLorean was powered by a “Mr. Fusion” unit that turned household trash into more than a gigawatt of power — both of which, unfortunately, are fictional.

Fossil fuels store vastly more energy by weight than batteries, and that’s unlikely to change any time soon. And that’s too bad, because the Tang Jet needs a whole lot of power.

According to a paper Tang and his collaborators published about the thruster prototype in the journal AIP Advances in May, the technology produces about 28 Newtons of thrust per kilowatt of power. The engines on the Airbus A320, a common commercial jet, produce about 220,000 Newtons of thrust combined, meaning that a comparably-sized jet plane powered by Tang Jets would require more than 7,800 kilowatts.

For perspective, that would mean loading an aircraft up with more than 570 Tesla Powerwall 2 units for a single hour of flight — an impractical load, especially because the A320’s payload could only carry about 130 of the giant battery units. Long story short, no existing battery tech could provide enough juice.

“Does this thing just become a flying Tesla battery?” Combs said. “With the weight of these batteries, you don’t have room for anything else.”

The battery weight issue doesn’t doom the Tang Jet, but it pushes options for its power source into the fringe. Tang is banking on improvements to battery technology over the next years and decades; those Electrofluidsystem researchers speculated about nuclear fusion. Unfortunately, any possible answers could be decades away or impossible.

It is worth noting that there exist compact nuclear fission reactors, like Russia’s KLT-40S, that produce enough power and weigh little enough that they could fit in a passenger plane or rocket.

But the safety and environmental implications of nuclear-powered aircraft are grim, and Heil was quick to point out that generating enough power isn’t the only problem facing a Tang Jet. Actually getting the electricity from the power source to the thrusters would pose its own difficulties, perhaps requiring superconducting materials that don’t exist yet.

"You need power to generate thrust. And how do you move that power around on the aircraft?" Heil said. "Moving and controlling megawatts from the reactor to the jet is a huge challenge. You have to use big thick copper wires, that adds a lot of weight."

Overall, both Combs and Heil questioned the feasibility of a practical Tang Jet based on the technology we have today. Without a quick fix to the energy problem, it’s certainly a tall order.

But both said they were fascinated by the research and hoped to see future progress. They also pointed out that a plasma thruster could be useful for pushing satellites or spacecraft that are already in orbit — though at that point it would need to bring propellant with it rather than using atmospheric air, since there’d be none in the vacuum of space.

The bottom line, Heil and Combs agreed, is that we won’t have a firmer grasp of the future of the tech until Tang’s colleagues have evaluated and experimented with it.

“I'm rooting for this, and I'd love to see it pan out," Combs said. "But the scientist in me has some questions and some concerns."

Editor's note 7/8/2020: This article originally misattributed credit for a past attempt to develop plasma thrusters. It has been corrected with proper credit

Read This Next
Charged Up
Startup Says Amazing New Battery Lets EVs Drive 400 Miles, Recharge in 15 Minutes
Top It Off
Startup Says Solar-Powered Electric Car Never Needs to Charge
Empty Seat
Waymo Ditches Human Safety Drivers in Its Self-Driving Taxis
How the Turntables
Tesla Is Now Worth More Than ExxonMobil
Brands We Love
5 Ways an Electric Bike Will Change Your Life
More on Advanced Transport
Kapow
Feb 3 on the byte
Self-Driving Car Plowed Into Active Fire Scene, Forcing Firefighters to Smash Its Window
Netflix and Drive
Jan 30 on futurism
Mercedes Claims to Have Achieved Level 3 Automation, Beating Tesla
Battery Trouble
Jan 30 on the byte
Tesla "Spontaneously" Bursts Into Flames While Driving Down Freeway
READ MORE STORIES ABOUT / Advanced Transport
Keep up.
Subscribe to our daily newsletter to keep in touch with the subjects shaping our future.
+Social+Newsletter
TopicsAbout UsContact Us
Copyright ©, Camden Media Inc All Rights Reserved. See our User Agreement, Privacy Policy and Data Use Policy. The material on this site may not be reproduced, distributed, transmitted, cached or otherwise used, except with prior written permission of Futurism. Articles may contain affiliate links which enable us to share in the revenue of any purchases made.
Fonts by Typekit and Monotype.