Scientists from Project Manhattan Wanted to Land on Saturn by 1970

Learn the history of Project Orion. 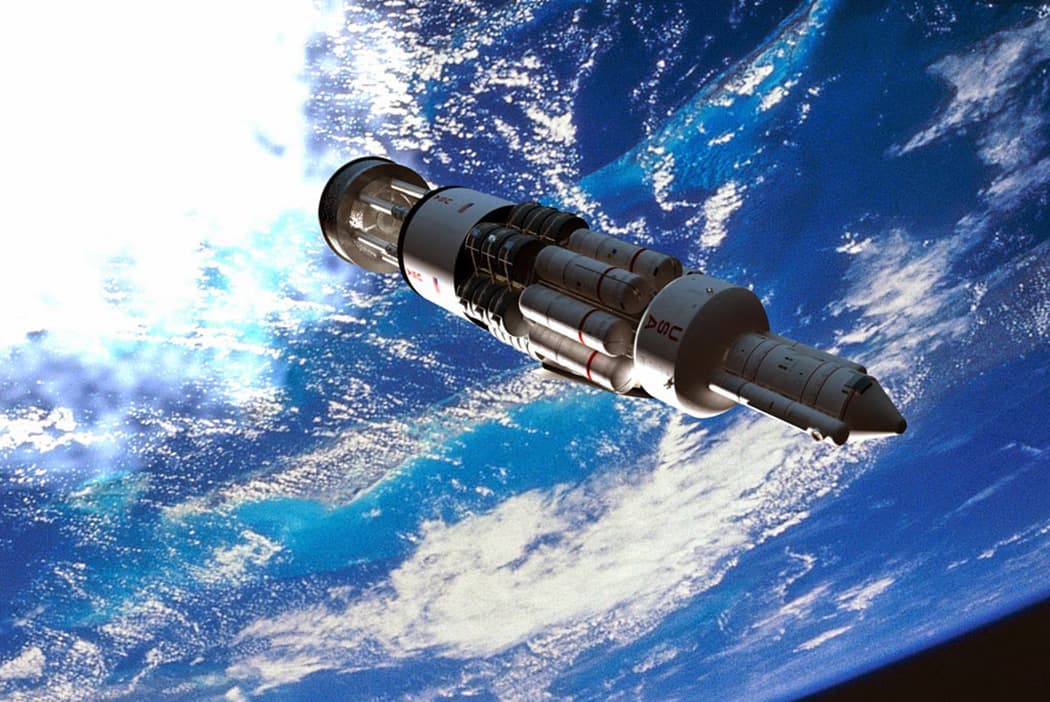 In the 1960s, the US government's top secret Project Orion had its eyes on a target far further away than NASA's lunar goal. Twenty people would land on the surface of Saturn in 1970, after taking a casual detour on Mars on the way. They would be propelled there by riding the blast-waves of nuclear explosions the spacecraft dropped out of its stern (this is called nuclear pulse propulsion).

Using many of the minds who were part of the Manhattan Project (to build the atomic bomb), the ship would have been a little taller than the leaning tower of Pisa at 60 meters (196.85 feet), about forty times as heavy as a blue whale at 3628.739 metric tons (4,000 tons), have its hull built "built like a submarine, not an airplane," according to project member Freeman Dyson and — to top it all off — was designed to be a reusable, multi-use platform.

While this sounds as outlandish as science fiction, Washington took the proposal so seriously that they spent the equivalent of US$85 million in today's money on development. Russia had just caused upheaval in America by launching Sputnik, the world's first artificial satellite. This caused the US to invest millions into various aspects of space exploration in order to be the first to the next frontier.

Orion fell apart, though, due to three main factors: First, it could not be used as a weapon by the country, which was a prerogative for much of the innovative technologies of the Cold War. Second, NASA's public image concerns and the 1963 Partial Test Ban Treaty forbade the testing almost all nuclear explosions — Orion, with 20 people in it, was not the type of rocket you wanted to send off without testing. Third, organizations were running low on funds, and when NASA was pressed for a decision over contribution, they placed Apollo and Saturn V on the list of priorities above Orion.

Project Orion seems like a clunky and crude solution to space travel — but its premise is so sound that NASA recently announced that using small-scale nuclear fusion rockets may be the step forward the space world needs. Space travel has strangely come full circle.

Both Project Orion and NASA's latest gambit aim to combat the inefficiency of the traditional chemical method of propelling spacecraft into the cosmos. Chemical rockets are ineffective on two fronts. First, the amount of power they derive from the fuel is small. Second, and because of this, they need to carry a large amount of fuel, which increases their mass and therefore the amount of energy it takes for them to achieve liftoff.

Nuclear powered spacecraft are not the only solutions to this problem, though: modern cosmic engineers have tried to develop other ways to overcome their inadequacy. Paul Allen has built the world's largest plane to ferry spacecraft to the upper atmosphere to decrease the amount of fuel they need.

The reusable rocket business — a key aspect of Project Orion — is being spearheaded by Elon Musk's SpaceX and Jeff Bezos's Blue Origin. To compensate for the weight of the fuel needed to take off and penetrate the atmosphere, a significant proportion of a traditional rocket's parts have been shed during ascension — and are destroyed in the process.

The reusable method decreases financial inefficiency by having most of the rocket survive both takeoff and landing, and by building rockets smaller and lighter, which means they need less activation energy from the fuel. Both companies completed successful landings — Blue Origin in November and SpaceX in December 2015 — but only SpaceX's venture has managed to relaunch.

Project Orion was a radical new idea that would have rendered Sputnik and the moon landings obsolete if it had ever been realized. What is perhaps most unfortunate is that it was abandoned due to political considerations rather than purely practical ones — as Dyson stated at the time, "a major expansion of human technology has been suppressed for political reasons."