Here Is the Future of Interstellar Spacecraft

Since Project Daedalus in 1973, humans have been designing craft to fly between the stars. 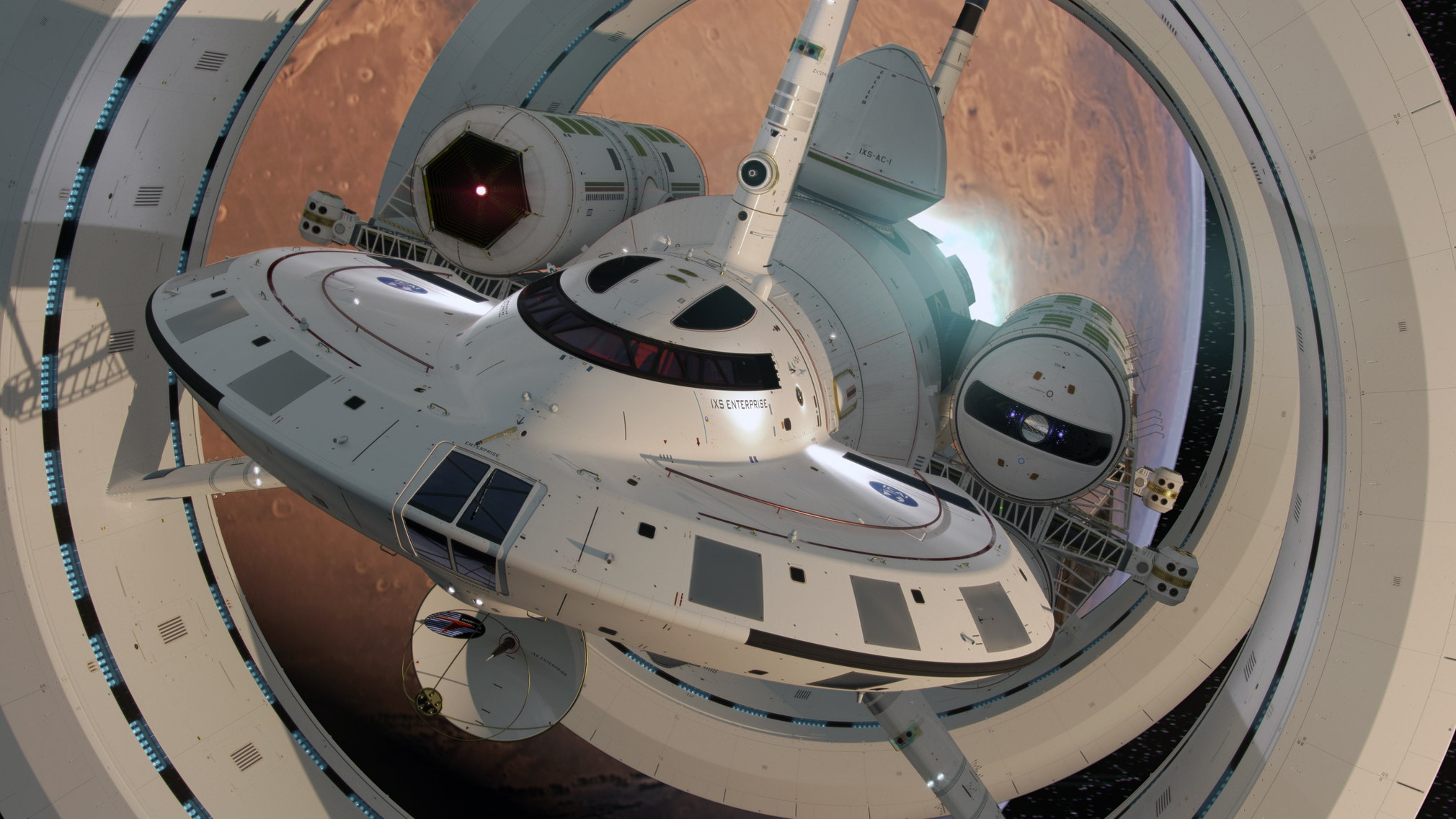 An Early and Very Ambitious Start

In 1973, the British Interplanetary Society — now, the oldest space advocacy organisation in the world — launched a five year study to design an unmanned spacecraft that was capable of interstellar flight. Project Daedalus was the first to tackle the question of the possibility of interstellar travel. The goal of the project was discover the feasibility of getting a person to travel to a variety of different target stars using technology of the near future, and getting them there within their lifespan.

The difficulties of reaching speeds fast enough, generating enough power, and not burning the spacecraft to a crisp were not easily overcome. The Project Daedalus team ended up choosing a nuclear pulse rocket that could overcome these limitations. Small thermonuclear bombs would be detonated inside cusp-shaped magnetic fields behind the spacecraft, propelling it forward at the highest possible efficiency.

A velocity of more than 10,000 kilometers per second would have to be achieved to complete the mission requirements. But that was only a small part of the challenge. Who would steer it? A sophisticated autopilot system would have to take the reigns, carrying passengers across the galaxies.

The fuel to power the reactors would have to come from a helium-3 isotope, mined from the atmosphere of Jupiter or the Moon by a large hot air balloon; yet another complication to add to an ever-growing list. In the end, a final report published in 1978 declared that interstellar flight was indeed feasible, but a working prototype has yet to be designed.

But to call Project Daedalus a pipe dream would be doing it a disservice. There are numerous indications that space agencies and universities of today have been considering the Project Daedalus ideas, such as using nuclear power as propulsion. The now over thirty-year-old project has laid much of the groundwork of interstellar travel and was the first of its kind.

Members of the British Interplanetary Society teamed up with the Tau Zero Foundation in 2009 to design a credible interstellar space probe, using the same nuclear fusion-based propulsion system as the one designed for the Daedalus Project.

The project's goals are to complete a set of technical reports that lay out all the details of an interstellar probe, while motivating the next generation of scientists, who will be completing the designs of this spacecraft. The engineering project is currently looking for volunteers to bring it to completion.

The Planetary Society launched a project called LightSail to examine the possibility of a spacecraft that was purely solar-powered and propelled by sunlight alone. A first iteration (LightSail 1) completed a "shakedown cruise" in orbit and transmitted its first signals back to Earth. Its successor, LightSail 2, is set to launch aboard a SpaceX Heavy Falcon rocket in 2018.

The concept of a solar sail used for propulsion in space is not a new one. Alongside the discovery of the photon, astronomers such as Johannes Kepler in the 1600s were already hypothesizing about the possibility of harvesting the energy of the sun and transferring that momentum to another object as the source of propulsion.

Stephen Hawking has voiced his own desire to launch a light sail called Breakthrough Starshot. At a recent event in Norway, Hawking described the small space probe that could travel "on a beam of light," reaching roughly 160 million k/h (100 million mph). The project has yet to overcome significant hurdles and many rounds of funding.

In 1960, an American physicist conceptualized an interstellar spacecraft that was able to travel at a significant fraction of the speed of light. Rather than being "weighed down" by the mass of the payload, Bussard's ramjet relied on harvesting hydrogen and using it as a propellant. Like the original Daedalus Project, the ramjet would use hydrogen in a nuclear fusion reactor to supply the energy needed to carry it to distant stars.

According to his calculations, the ramjet would need a collection area of nearly 10,000 square kilometers. The resulting mass would be astronomical, making it more or less infeasible.

Long gone are the dreams of fueling an interstellar probe with hydrogen isotopes in a nuclear reaction. The new frontiers of interstellar travel have moved their focus to antimatter thrusters, but reactions between antimatter and matter have very violent consequences. Assuming the possibility of directing the huge amounts of energy created in a single direction, the energy outburst caused by the atoms' mutual annihilation could be collected and used as a rocket propellant — but we are far from being able to test this in reality.

An antimatter rocket has inherent limitations: (1) an immense load of dangerous gamma radiation that results from an antimatter reaction; (2) creating enough antimatter for fuel; and (3) limiting the size of the payload.

NASA's Institute for Advanced Concepts has been funding research into a new design for an antimatter-powered spaceship that overcomes the first challenge. By relying on newly discovered positrons (rather than antiprotons), the resulting gamma rays would be far lower in energy.

More recent designs have overcome the second challenge by designing a kind of antimatter sail. Gerald Jackson, former Fermilab physicist, created a Kickstarter to test an antimatter thruster and make antimatter-based propulsion a reality. Another estimated $100 million will have to be raised to develop an Earth-based test.

NASA designed its own Star Trek-like space warping ship in 2016 that shares a lot of similarities with the USS Enterprise. Ship designer Mark Rademaker's goal was to "motivate young people to pursue a STEM career," he told The Washington Post. Rather than relying on nuclear fusion or antimatter reactions, the IXS Enterprise takes advantage of a warp drive that, according to io9, would expand "empty space behind a starship [...] pushing the craft in a forward direction." The large rings around the spacecraft serve to form a "warp bubble" to reduce the energy requirements for the warp drive.

Read This Next
Futurism
These Satellites Are the Smallest to Ever Reach Earth’s Orbit
Futurism
These Projects Could Take Us to the Stars in the Next 20 Years
Futurism
Stephen Hawking's Tiny Spacecraft Could Reach Another Solar System in Just Over 20 Years
Futurism
Breakthrough Tech Could Allow Us to Reach Alien Worlds in Just 70 Years
Futurism
The Next Earth May Be Even Closer Than We Imagined
More on Off World
TTFN
Yesterday on the byte
Skkrt! NASA's Orion Heads Back to Earth, Leaves Moon in the Dust
Icy Comet Eruption
Yesterday on the byte
Astronomers Spot Volcano Erupting on a Distant Comet
RUD-dy
Yesterday on the byte
SpaceX Rocket Engine Explodes In a Green Blast
READ MORE STORIES ABOUT / Off World
Keep up.
Subscribe to our daily newsletter to keep in touch with the subjects shaping our future.
+Social+Newsletter
TopicsAbout UsContact Us
Copyright ©, Camden Media Inc All Rights Reserved. See our User Agreement, Privacy Policy and Data Use Policy. The material on this site may not be reproduced, distributed, transmitted, cached or otherwise used, except with prior written permission of Futurism. Articles may contain affiliate links which enable us to share in the revenue of any purchases made.
Fonts by Typekit and Monotype.