The Next Earth May Be Even Closer Than We Imagined

Our future home could be in the solar system next door.

In August 2016, researchers discovered a potentially habitable planet about the same size as Earth orbiting the closest stellar neighbor to our Sun: Proxima Centauri. This places Proxima b about 4.2 light years away. Scientists have tried to detect more details about the planet, and hopefully moving forward the James Webb telescope will provide better views. However, a spacecraft sent to the planet could gather enough data to reveal whether it could support life — or maybe that it already does.

Just before Proxima b was found, a group of scientists and business leaders took the first steps towards sending humans to the Alpha Centauri system by announcing the Breakthrough Starshot. The international effort, backed by Russian investor Yuri Milner to the tune of $100 million, aims to vastly accelerate the research and development of a viable space probe for the interstellar trip. The Proxima b discovery provided an attainable, yet still daunting, engineering target. 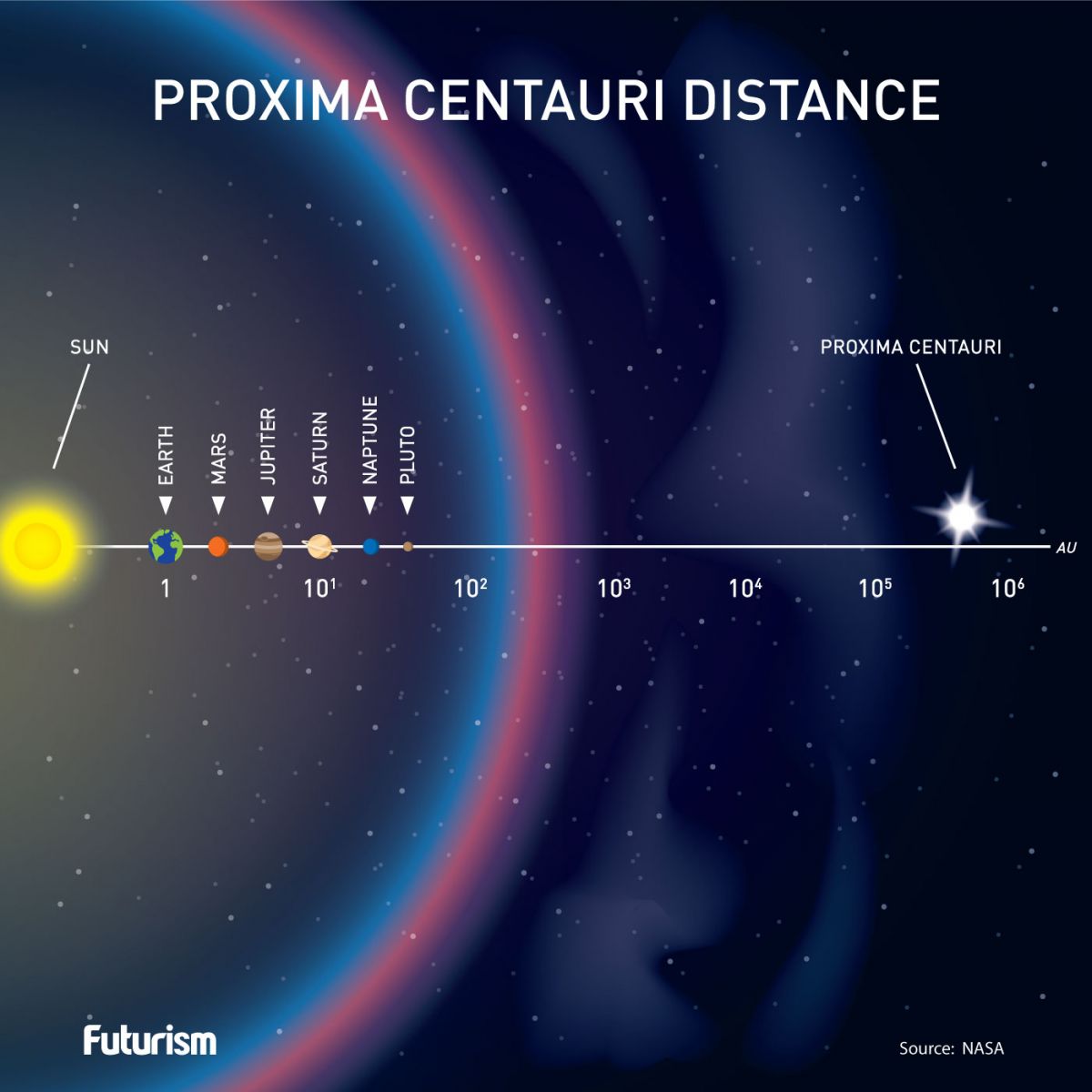 To reach Proxima b within the lifetime of the average scientist, a probe would need to travel at one-fifth the speed of light or faster as it navigated through invisible debris. Then, during a 60,000-kilometer-per-second (37,000-miles-per-second) fly-by of the Proxima system, it would need to collect useful data and transmit it four light years back to Earth.

The first major step is to accelerate the spacecraft to a high enough speed. Conventional rockets can’t store enough fuel to reach the required speeds, so Starshot is working to harness light from lasers. An Earthbound 100-gigawatt array of lasers would generate a beam to propel the probe’s small light sail after conventional rockets launched it clear of our atmosphere.

The biggest risk will come from collisions with interstellar particles and cosmic rays. Starshot hopes to protect the craft by coating the leading edge with a millimeter or so of a high-strength material such as beryllium copper. To ensure that being knocked off-course doesn’t end the mission, the probe will be equipped with pilot AI.

The team hopes to launch the craft around 2040, and then wait out the 20 years of travel without news. Then, around 2060, the on-board computer of the Starshot craft should wake up, check in with Earth, detect that it is approaching Proxima Centauri, and prepare for its fly-by.

The highest priority for the craft will be to take a photo which could capture whether the planet is barren or watery and green like Earth. It could also reveal large-scale features, like craters and mountains. An on-board spectrometer could search for molecules that signal life, such as methane, oxygen, and more complex hydrocarbons. Instruments might also probe the atmosphere (if it has one) and measure the planet’s magnetic field. Proxima b, like every other nearby exoplanet, is likely to hold surprises that only a close encounter can reveal.

Even beyond that, proponents of the Starshot mission see its potential success as something more than data about a new world — it would represent humanity pushing itself to a new level of achievement. “I see Starshot as about the development of capability,” Kelvin Long, a member of the project’s advisory committee, told Scientific American. “It’s like going to the Moon.”

In other words, the success of the Starshot would equip us with a new set of capabilities that would transform solar system exploration from the dreamed into the routine. For example, the laser array planned by the Starshot will be able to send probes anywhere in our own solar system in a matter of days, and make trips into the interstellar medium in a week or two.

“How would you like to deliver next-day Amazon to Mars?” astrophysicist Philip Lubin, who is also on the project’s advisory committee, told Scientific American. “This is a radical transformation of how we might be able to explore.”

Why Are We Going to the Moon, Again? Oh Right, to Make It a “Gas Station for Outer Space”

How Humans Might Outlive Earth, the Sun, and Even the Universe Itself

After the Moon and Mars, NASA Wants to Head to Alpha Centauri in 2069