After decades of development, will NASA's largest space telescope finally get off the ground? 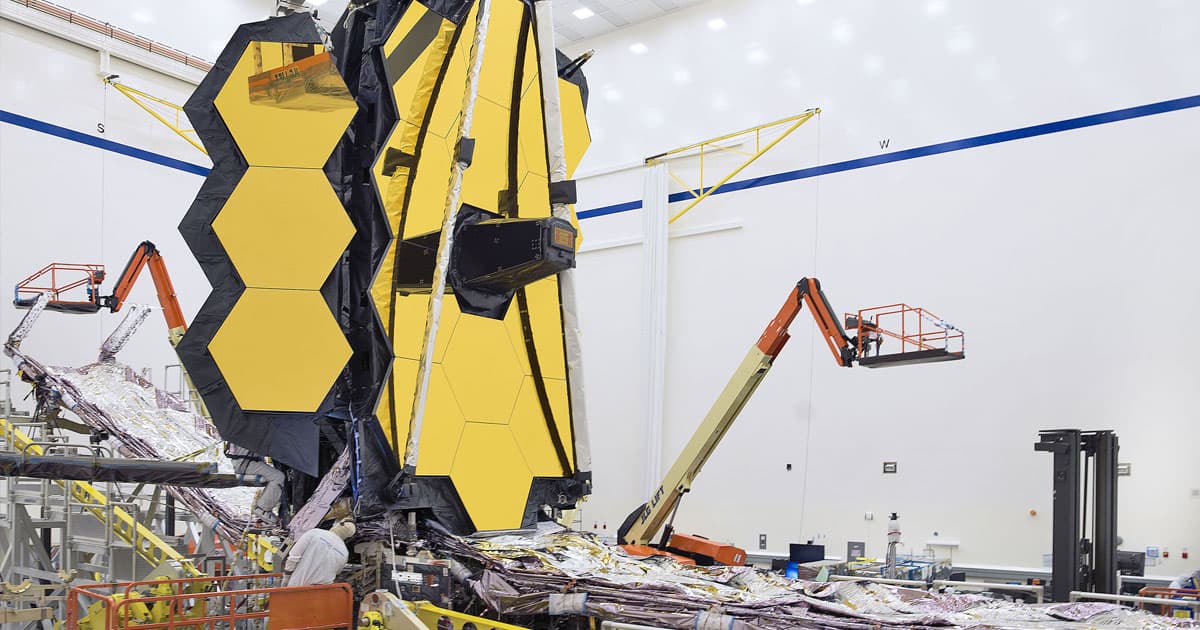 NASA's much-awaited James Webb Space Telescope may finally get its place in the night sky: NASA says it's now completed its final litany of critical software and electrical systems tests, theoretically clearing it for launch as soon as 2021.

It's the "largest and most technically complex space science telescope NASA has ever built," according to a statement. It's an international collaboration of unprecedented proportions between NASA, the European Space Agency, and the Canadian Space Agency.

Engineers worked 24 hours a day for 15 days straight, executing over a thousand scripts and instructions — a 1,370 step process, according to NASA.

Development of the delay-plagued orbital spyglass began in 1996, with an initial launch planned in 2007. Now, after a slew of major redesigns, countless delays, and budget overruns, NASA is tentatively eyeing a March 2021 launch. The space agency will reevaluate launch readiness this month.

The 21-feet-wide telescope will observe distant space, orbiting the Sun instead of the Earth, but at a distance called the Lagrange point that will keep pace with the Earth, as illustrated in the animation below.

An origami-like sunshield the size of a tennis court will keep it cool.

Its iconic 18 hexagonal mirror segments, each over four feet in diameter, will combine post-launch into a giant reflector with an area of 25.4 square meters (273 square feet). The huge reflector will allow the telescope to observe the stars in much lower frequency ranges compared to its predecessor, NASA's Hubble space telescope. Each mirror is fabricated from lightweight yet resilient beryllium.

The telescope will collect invaluable data using four scientific instruments, including cameras and spectrometers, to find out more about the earliest galaxies that first formed shortly after the Big Bang. It will also observe the early life cycles of stars as they form and evolve.

Another goal will be to take the temperature and investigate the chemical properties of other planetary systems to investigate if life can survive in those systems, according to NASA.

Read This Next
Futurism
The James Webb Space Telescope Is Going to Stare Straight Into Jupiter
Into Darkness
Inside NASA's Bold Proposal to Probe the Mysteries of Dark Matter
Martian Ammonia
NASA Rover Detects Organic Molecules on the Surface of Mars
Myanus, Hisanus, Heranus...
Here's What Uranus Scientists Think About Your Disgusting Jokes
Joseph Strikes Again
Experts Shred Paper Claiming to Identify Mushrooms on Mars
More on Hard Science
Reel Big Dish
Yesterday on the byte
Brilliant Scientists Decide to Name the World's Largest Telescope "SKA"
Horrible Geese
Dec 4 on futurism
Furious Geese Are Defeating Humans, Scientists Find
Quacks Like a Duck
Dec 1 on futurism
Those Headlines About Scientists Building a Wormhole Are Total Nonsense, People
READ MORE STORIES ABOUT / Hard Science
Keep up.
Subscribe to our daily newsletter to keep in touch with the subjects shaping our future.
+Social+Newsletter
TopicsAbout UsContact Us
Copyright ©, Camden Media Inc All Rights Reserved. See our User Agreement, Privacy Policy and Data Use Policy. The material on this site may not be reproduced, distributed, transmitted, cached or otherwise used, except with prior written permission of Futurism. Articles may contain affiliate links which enable us to share in the revenue of any purchases made.
Fonts by Typekit and Monotype.