"It’s analogous to the very first time that we measured someone's blood pressure." 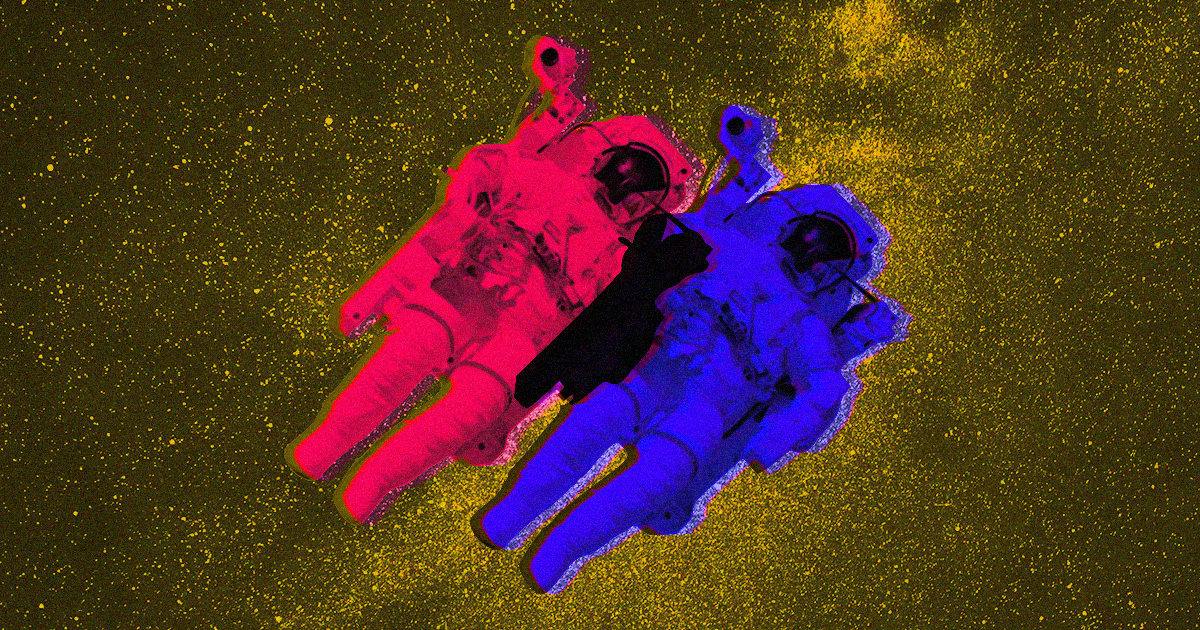 For years, NASA has been analyzing the health effects of space travel by comparing astronaut twins Mark and Scott Kelly. In 2015 into 2016, Scott spent 340 days in orbit while Mark stayed on Earth, giving scientists rare data about how leaving the planet affects the human body.

The study, finally published Thursday in the journal Science, reveals that Scott experienced a number of genetic changes while he was in space. Surprisingly, most of them reversed once he landed back on Earth, the MIT Technology Review reports, giving researchers valuable insight as space agencies prepare for longer and deeper missions into space.

Over the past few years, NASA scientists have gradually released some info about the twin study's findings. Most surprising was how Scott's time in space extended his telomeres, the protective caps that protect chromosome and — at least on Earth — slowly degrade over time.

While this finding will likely lead to speculation — and future research — into how spaceflight could affect human longevity, the changes were shortlived. Within half a year of his return to Earth, Scott's lengthened telomeres returned to normal, while some new, shorter-than-usual telomeres that formed upon his return persisted.

Past research on astronauts suggested that extended space travel could compromise their immune systems. The new findings reveal that these changes are largely temporary and that astronauts quickly recover, which is a promising development for the prospect of sending people out to Mars and maybe even farther.

But because the twin study only involved one person in space, it's hard to tell just how much each data point matters because the context is missing.

"It’s analogous to the very first time that we measured someone's blood pressure," lead researcher Chris Mason told MIT Tech. "We didn't know what the actual reference numbers were until we started to measure more people."

READ MORE: The first study of a twin in space looks like good news for a trip to Mars [MIT Technology Review]

More on the twin study: After a Year Away from Earth, Scott Kelly’s “Space Genes” Set Him Apart From His Twin

Read This Next
Monkey Business
China Plans to Send Monkeys to Space Station to Have Sex With Each Other
Overview Effect
William Shatner Says His Space Trip Left Him With a Feeling of Terrible Grief
Astronaut Drip
We Just Got the First Peek at NASA's Artemis Moon Landing Suits
Blast Off
Former Astronaut Details Quest to Grow Cannabinoids in Space
RIP
Unfortunate Comet Flies Too Close to the Sun, Disintegrates and Becomes a Ghost
More on Off World
Putting Things In...
Yesterday on futurism
Amazing Artemis Photo Shows Every Human, Alive or Dead, Plus the Moon
Love It or List It
Yesterday on the byte
NASA Hires Company to 3D Print American Base on the Moon
Shine Bright
Yesterday on the byte
Astronomers Annoyed at Ludicrously Bright SpaceX-Launched Satellite
READ MORE STORIES ABOUT / Off World
Keep up.
Subscribe to our daily newsletter to keep in touch with the subjects shaping our future.
+Social+Newsletter
TopicsAbout UsContact Us
Copyright ©, Camden Media Inc All Rights Reserved. See our User Agreement, Privacy Policy and Data Use Policy. The material on this site may not be reproduced, distributed, transmitted, cached or otherwise used, except with prior written permission of Futurism. Articles may contain affiliate links which enable us to share in the revenue of any purchases made.
Fonts by Typekit and Monotype.