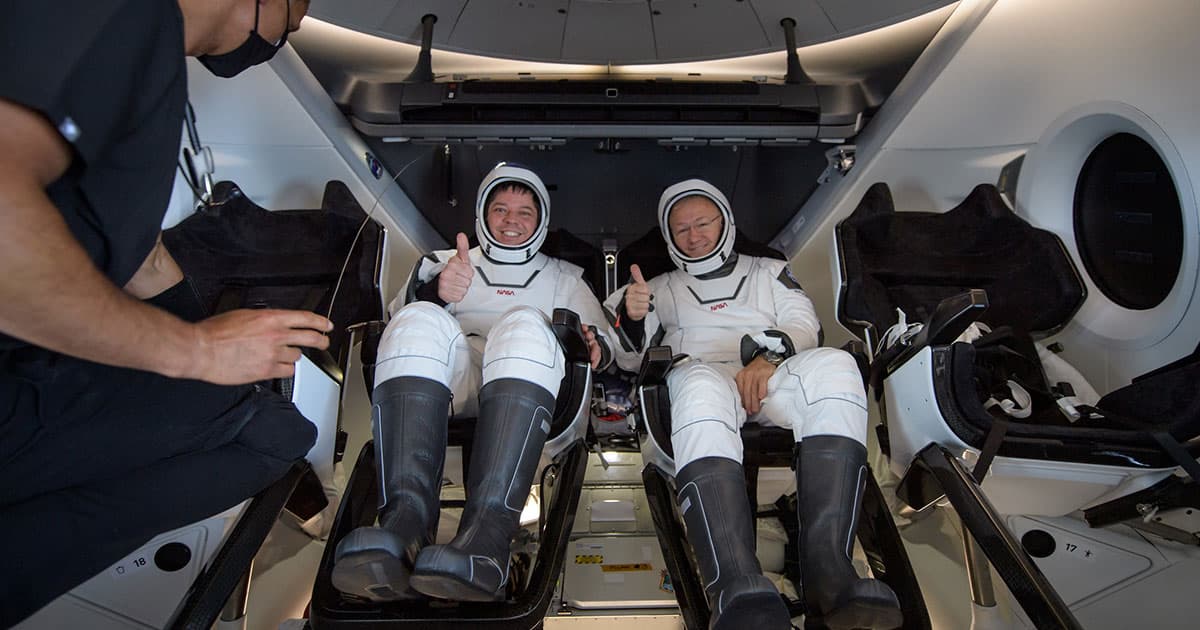 In a news conference, NASA astronauts Bob Behnken and Doug Hurley gave a first person account of what it's like to come screaming back through the Earth's atmosphere inside SpaceX's Crew Dragon spacecraft.

Behnken described the riveting events leading up to the splashdown in the Gulf of Mexico on Sunday, with up to four times the Earth's gravitational force being exerted on their bodies.

"You can hear that rumble outside the vehicle," he said. "And as the vehicle tries to control, you feel a little bit of that shimmy in your body."

"It doesn't sound like a machine, it sounds like an animal coming through the atmosphere with all the puffs coming out of the thrusters and the atmosphere noise," he added.

The NASA astronauts completed SpaceX and NASA's Demo-2 mission on Sunday afternoon, marking the first time a for-profit group has successfully launched human astronauts into orbit inside a commercial spacecraft.

And it sounds like the mission went by without a hitch.

"We're almost kind of speechless as far as how well the vehicle did and how well the mission went," Hurley said during the conference.

Hurley said that he anticipated challenges with the vehicle during the mission, noting that there were plenty of issues with NASA's retired Space Shuttle.

"The mission went just like the simulators, from start to finish, all the way," he said. "There really were no surprises."

Even while screaming through the atmosphere, "the vehicle was rock solid," even when parachutes deployed.

Behnken described the separation events from the space capsule's trunk section and parachute firings "very much like getting hit in the back of the chair with a baseball bat."

"It was just a great relief at that point for both of us," Behnken said referring to seeing water of the Atlantic splashing up against the water after landing.

"The pizza was waiting when we made it on board," he added.

Hurley also addressed the fact that more than a dozen of private boaters showed up after splashdown in the Gulf of Mexico to greet the astronauts.

"We appreciate the folks wanting to participate in the event, but there are some safety aspects we’ll have to take a look at," Hurley said. "It can’t happen like it did before."

Hurley also addressed reports that the pair made prank calls while waiting inside the spacecraft.

"There was a real reason for it," he said. "We wanted to get a test objective out of the way which was to call the core station at Hawthorne."

But after being put on standby, the pair decided to call others as well.

"'Hi this is Bob and Doug, we're in the ocean,'" Hurley recalled saying. The pair also called their wives, who were together nearby.

Aside from several spacewalks, the pair had a fairly conventional stay on board the International Space Station — relatively speaking. Behnken gave an account how he told his son over the satellite phone, from on board the space station, how to take care of the family's new puppy.

"To just share in that journey, that odyssey, that endeavor — as we named our ship — was just one of the true honors of my entire life," Hurley said, noting the historical significance of the mission.

More on splashdown: Bored Inside Their Spacecraft, NASA Astronauts Made Prank Calls to Pass the Time

Read This Next
From the Dept. of Things to Buy
Review: The "Out of This World Cook Book" Chronicles the Early Meals of the Space Age
Overloaded
Whiny Space Tourists Say They Were Too Busy on the Space Station
The Moonian
Senior NASA Official Fears Getting "Stuck" on the Moon
Space Sick
Space Is Wreaking Havoc on Astronauts' Blood
Slip Sliding Away
NASA's Absurdly Expensive SLS Megarocket Is Broken Again
More on Sci-Fi Visions
Health Revelation
Tuesday on neoscope
Chris Hemsworth Reveals Grim Genetic Test Results, Will Take Break From Acting
Cybersecurity Dis...
Nov 13 on the byte
Insurance Company Refuses to Pay Ransom, So Hackers Start Releasing Health Records of Up To 10 Million People
PDA
Nov 9 on futurism
Elon Musk Is Faving Posts on Twitter That Are Making Our Skin Crawl With Embarrassment
READ MORE STORIES ABOUT / Sci-Fi Visions
Keep up.
Subscribe to our daily newsletter to keep in touch with the subjects shaping our future.
+Social+Newsletter
TopicsAbout UsContact Us
Copyright ©, Camden Media Inc All Rights Reserved. See our User Agreement, Privacy Policy and Data Use Policy. The material on this site may not be reproduced, distributed, transmitted, cached or otherwise used, except with prior written permission of Futurism. Articles may contain affiliate links which enable us to share in the revenue of any purchases made.
Fonts by Typekit and Monotype.