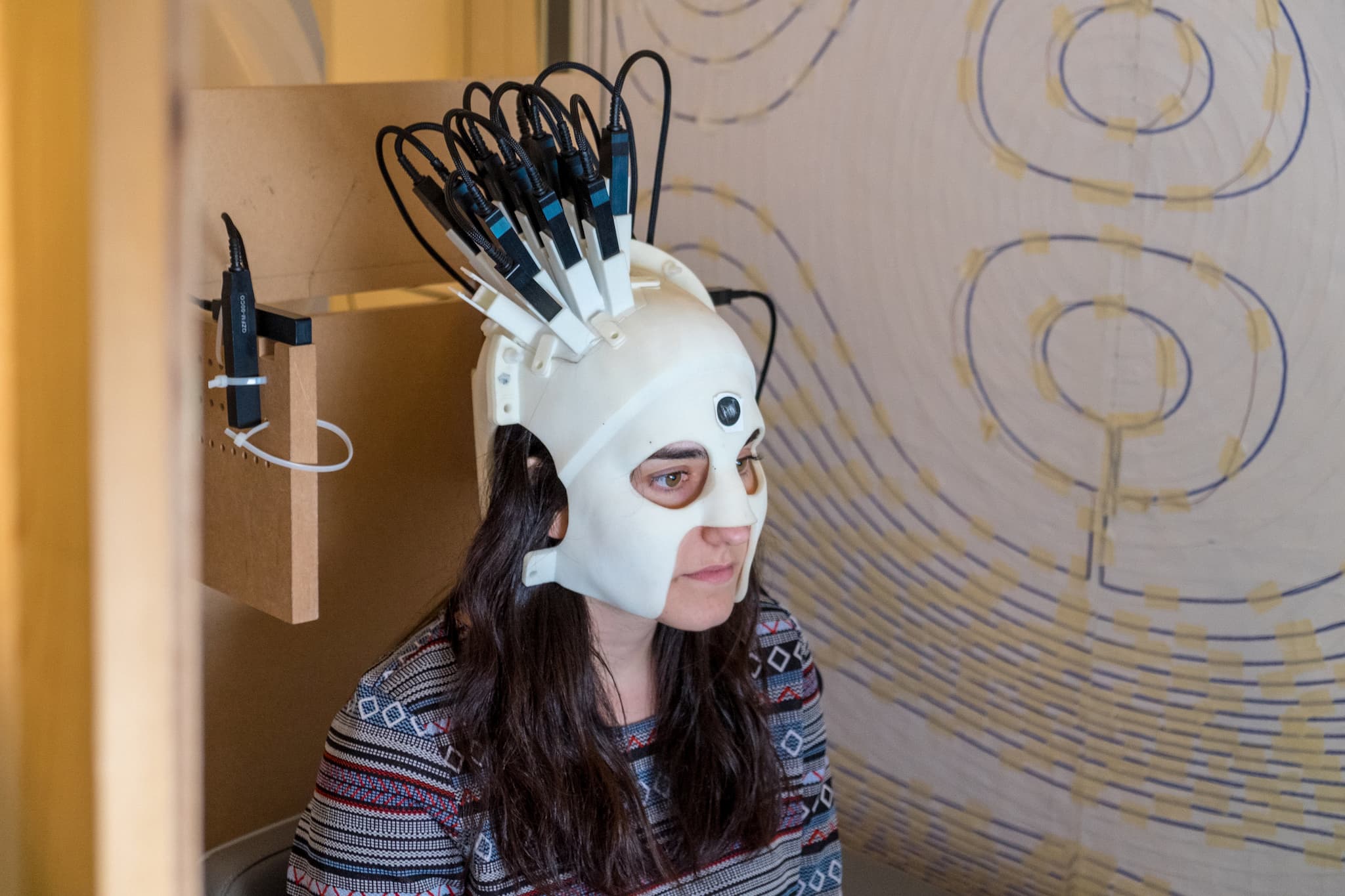 Children with mental and neurological disorders have plenty of challenges in their lives. The last thing they need is to sit still for a while with their heads stuck in a machine — the current technique that scientists use to take pictures of their brain activity. It's inconvenient and unpleasant, but it's also pretty limited, because it tells scientists nothing about how the brain behaves when the patient is active, going about their daily lives.

Scientists in the U.K. and U.S. decided it was time to make brain imaging way less stressful for patients, not to mention suitable for patients that struggle to keep still, such as toddlers.

They came up with a (scary-looking but) versatile helmet that allows them to move relatively freely as it scans their brain. The helmet is 3D printed, can be personalized to fit a patient's head, and weighs less than one kilogram.

The researchers were able to shrink the machine without reducing its function by replacing the conventional sensors, which require a heavy cooling system, with tiny ones that use a different technique to capture the brain's magnetic field.

As reported by New Scientist, the team tested the helmet on four volunteers. They were asked to move their fingers, to play a ball game and even have a cup of tea (because England). These experiments showed the portable scan worked as precisely and accurately as a conventional static one.

“This has the potential to revolutionize the brain imaging field, and transform the scientific and clinical questions that can be addressed with human brain imaging,” Gareth Barnes, a neuroimaging expert with the University College London and a partner of the project, told The Guardian.

Patients wearing the helmet can't exactly forget about it — the scanner only works inside a special room designed to suppress the influence of the Earth's natural magnetic field, which would interfere with the procedure. Oh, and it don't just sit on the top of the head, but covers part of the face, too.

Still, the device could help researchers study child development, or brain activity of children with epilepsy. Better understanding could allow doctors to catch problems sooner, and treat them better.

Although still experimental, the device's creators are confident that a mobile brain scanner holds great promises for science. They may do more tests, on people with neurological conditions such as Alzheimer's and Parkinson's disease, or psychoses, and see if they learn anything new.

They also realize the design isn't quite where it needs to be. So they're working on making future iterations look similar to a bike helmet. Perhaps they realized that terrified patients with their heads stuffed in giant devices might not give the most reliable brain scans.

Read This Next
It's Electric
Scientists Say This Headset Significantly Improves Elders' Memory
Zzz Eureka!
Human Brains Can Solve Hard Problems Moments Before Falling Asleep, Study Finds
From Our Partners
Celebrate Labor Day With Discounts On Rosetta Stone, Top-Rated VPNs, And More
From Our Partners
Hone Your Brain With Over 50% Off A Subscription To NeuroNation
Brands We Love
This Advanced Acetylcholine Supplement Boosts Your Brain for Superior Mental Clarity
More on Sci-Fi Visions
Human v. Giraffe
Tuesday on the byte
Chaotic Italian Fashion Line Baffles Facial Recognition Software
Step One
Tuesday on the byte
World’s Third Richest Person Says He’s Developed "Addiction" to ChatGPT
FROM THE DEPT. OF...
Tuesday on futurism
The Best Places to Buy A Laptop in 2023
READ MORE STORIES ABOUT / Sci-Fi Visions
Keep up.
Subscribe to our daily newsletter to keep in touch with the subjects shaping our future.
+Social+Newsletter
TopicsAbout UsContact Us
Copyright ©, Camden Media Inc All Rights Reserved. See our User Agreement, Privacy Policy and Data Use Policy. The material on this site may not be reproduced, distributed, transmitted, cached or otherwise used, except with prior written permission of Futurism. Articles may contain affiliate links which enable us to share in the revenue of any purchases made.
Fonts by Typekit and Monotype.