"We need to take all heavy industry, all polluting industry, and move it into space." 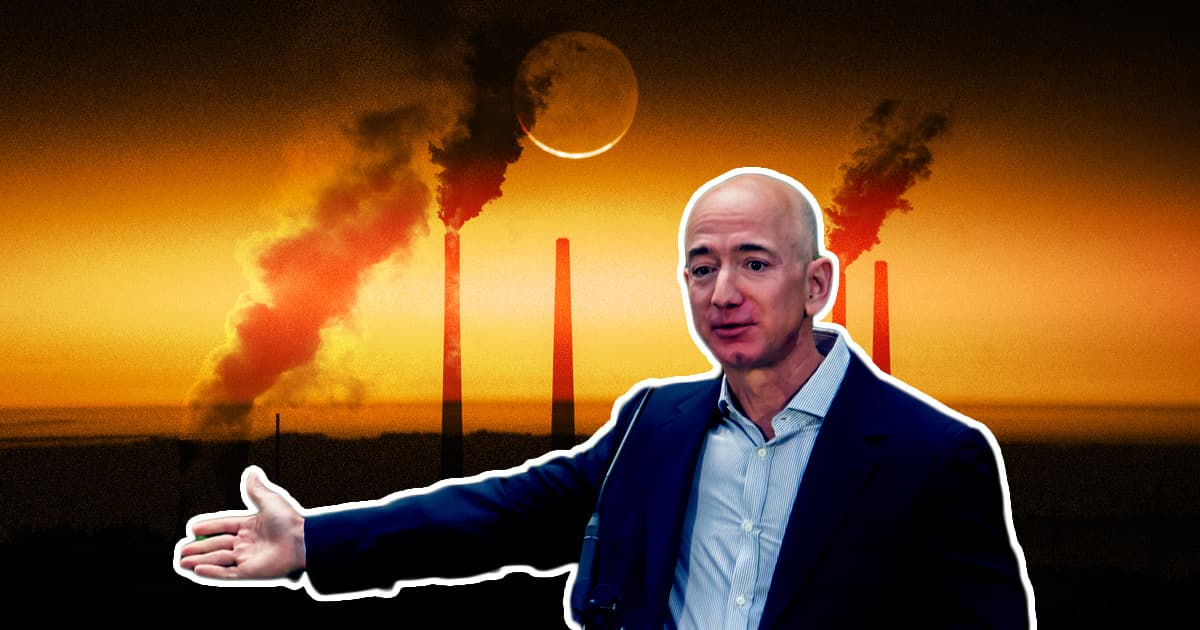 It's been just over 24 hours since Amazon founder and Blue Origin CEO Jeff Bezos took off on his rocket.

It was a fleeting moment in space, or at least somewhere near it, giving Bezos the opportunity to look back down at the surface below and ponder just how much humanity has messed with the natural beauty of our once pristine planet.

That's an environmental toll, it's worth noting, that Bezos has personally contributed to greatly. Amazon's race to the bottom when it comes to carbon emissions has added considerably to our climate change problem (and let's not forget about its many attacks on workers' rights).

From single-day shipping to wasteful packaging, the billionaire has made fortunes at a great cost to sustainable business practices and the natural environment.

All of which make his comments after his adventure even more egregious. His great Eureka moment: why don't we take all the stuff that's bad for the environment and send it to space?

"We need to take all heavy industry, all polluting industry, and move it into space," he told NBC after the launch. "And keep Earth as this beautiful gem of a planet that it is."

In other words, after polluting the Earth, Bezos wants to pollute space too.

That's a bit rich, of course, since Bezos only made it to space himself if you treat "space" as a very flexible concept.

To be fair, though, the billionaire also acknowledged that such a move won't happen overnight.

"That's going to take decades to achieve, but you have to start," he told NBC. "And big things start with small steps."

Of course, shuttling the ultra-wealthy high into the sky for a ten minute joyride is also quite destructive to the environment. But Bezos wants to have his cake and eat it, too.

Moving all heavy industry into space could easily end up being an extremely wasteful process in itself. The simple act of moving materials up into orbit could come with its own colossal carbon footprint, as Gizmodo points out.

While waxing poetic about living "on this beautiful planet," as Bezos told NBC, Bezos is using his fortunes to add to its demise, stunning views notwithstanding.

Bezos did take a moment to acknowledge this inescapable double standard.

"You can't imagine how thin the atmosphere is when you see it from space," the CEO told NBC. "We live in it, and it looks so big. It feels like this atmosphere is huge and we can disregard it and treat it poorly."

Bezos' joyride into the upper atmosphere this week is only the beginning of a largely unnecessary race to get the top one percent into space — or at least to the edge of it.

Building on top of Amazon's existing carbon footprint, Blue Origin will soon become a great contributor to carbon emissions as well, reusable rockets or not.

The CEO claims he will also be focusing his own efforts on the Bezos Earth Fund, a convenient philanthropic endeavor that's bound to score him some positive PR points.

But if history has taught us one thing, it's that we shouldn't take billionaires by their word when it comes to saving the environment.

The richest man in the world is fighting with fire. Amazon is practically defined by its environmental footprint. Blue Origin is also helping create a carbon polluting industry out of practically nothing.

In other words, maybe it's time for Bezos to refocus his priorities and put his astronomical pile of money where his mouth is.

Read This Next
False Dichotomies
British Royal Disses William Shatner's Spaceflight
Walk The Walk
Bezos Coughs Up Pathetic 7% of Net Worth to Fight Climate Change
Recycled Cardboard
Amazon Launches Initiative to Make All Deliveries Carbon Neutral
Futurism
Bad News: The Amazon Might Be Past the Point of Saving
Futurism
Amazon's Largest Wind Farm Will Be Able to Power 90,000 Homes in Texas
More on Earth & Energy
Cow Chow
Yesterday on the byte
Bill Gates Gives $12 Million to Flatulent Australian Cows
Dye in the Water
Yesterday on the byte
Scientists Dye Chunks of Ocean Water Pink for Head-Turning Coastal Experiment
Face/On
Yesterday on the byte
Scientists Found a Dinosaur's Face, Complete With Its Skin
READ MORE STORIES ABOUT / Earth & Energy
Keep up.
Subscribe to our daily newsletter to keep in touch with the subjects shaping our future.
+Social+Newsletter
TopicsAbout UsContact Us
Copyright ©, Camden Media Inc All Rights Reserved. See our User Agreement, Privacy Policy and Data Use Policy. The material on this site may not be reproduced, distributed, transmitted, cached or otherwise used, except with prior written permission of Futurism. Articles may contain affiliate links which enable us to share in the revenue of any purchases made.
Fonts by Typekit and Monotype.