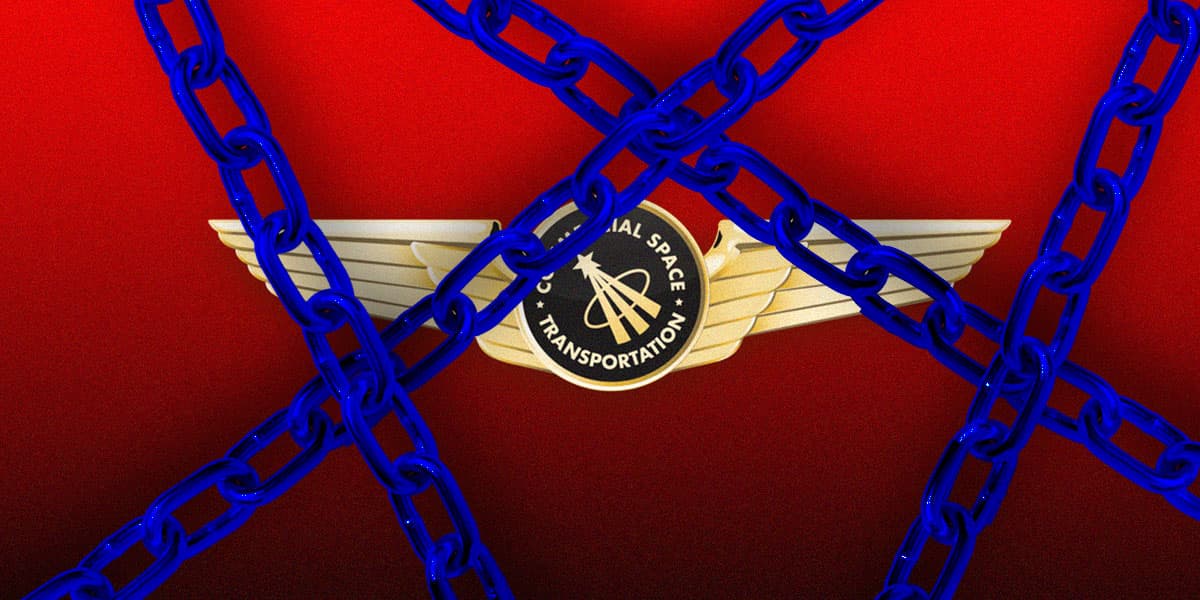 Along with three other passengers, Blue Origin CEO Jeff Bezos rocketed high into the upper atmosphere on what the company is calling its first crewed mission to space.

The company's New Shepard rocket, dubbed the RSS First Step, launched from the West Texas desert and reached three Gs and a blistering speed of 2,233 mph during the trip.

"It’s actually a pleasurable experience," Bezos said during a press conference following the launch. He also noted that his expectations were "dramatically exceeded" and that zero gravity "felt so normal."

In reality, it's arguably a bit of a stretch to use the term "astronaut" here. If you zoom out, it looks an awful lot like Bezos and co couldn't qualify for normal astronaut wings — so it invented its own.

To be sure, the United States Air Force, Navy, and Marine Corps award the astronaut badge to those who fly above just 50 miles.

But while the rocket's passengers successfully traveled to 62 miles, an arbitrary line drawn by the Fédération aéronautique internationale (FAI) over half a century ago, they were passengers, not actual crew members.

The use of the term is controversial, considering the four were taken for a ten minute joyride and weren't ever in control over the vehicle.

None of them became NASA astronauts today, either — despite the fact that Funk more than deserves her certification after being put through the space agency's rigorous Woman in Space Program gauntlet in the early 1960s, even though none of the program participants were ever selected to go to space.

NASA reserves the right to award the wings to only those who complete a set of specific requirements. Eligible US citizens need to possess a master's degree in a STEM field, have two years of relevant professional experience or complete "at least 1,000 hours pilot-in-command time on jet aircraft."

They also need to be able to pass the "NASA long-duration flight astronaut physical," which, among many other things, requires them to have 20/20 vision, a blood pressure of below 140/90 while sitting and a "standing height between 62 and 75 inches," according to official documentation.

The crew also missed the chance to be awarded wings designed for those who fly to space on commercial spacecraft. Bezos and company didn't end up qualifying for the Federal Aviation Administration's (FAA) Commercial Astronaut Wings, due to the fact they were passengers, not flight crew.

The FAA’s Commercial Astronaut Wings Program was designed to "recognize flight crewmembers who further the FAA’s mission to promote the safety of vehicles designed to carry humans," according to the agency's website.

Crews have to demonstrate a safe flight and return from space on a mission licensed by the FAA. They also have to meet other specific requirements for "flight crew" qualifications, including the "ability to withstand the stresses of space flight, which may include high acceleration or deceleration, microgravity, and vibration," as well as training and flying above 50 miles above the surface of Earth.

The FAA awarded the first Commercial Astronaut Wings license for the launch of the spaceplane SpaceShipOne (SS1) back in 2004, an aircraft launch system now operated by Richard Branson's Virgin Galactic.

The FAA also approved today's Blue Origin launch last week — but despite the approval, the administration's wings are still out of reach for Bezos and company.

The administration also requires crew members to perform a job while on the flight to qualify as "flight crew" and don't award them to "spaceflight participants," CNN reports.

Branson, interestingly, did qualify for FAA wings during his maiden voyage earlier this month, as he was tasked with evaluating the private customer experience during the launch.

In fact, Virgin Galactic pilots Mark ‘Forger’ Stucky and ‘CJ’ Sturckow were also awarded FAA Commercial Astronaut Wings by the US Department of Transportation after flying the spaceship VSS Unity into "space," an apogee of 51.4 miles, back in 2018.

Blue Origin's New Shepard spacecraft flew entirely autonomously today, meaning that nobody on board had to act as the pilot or flight crew, as Axios points out.

18-year-old Oliver Daemon, son of a equity firm CEO, who bought himself a ticket on the flight, won't get the FAA's astronaut wings either.

So it's no wonder that Blue Origin, a company that tasked itself with sending wealthy paying customers to the edge of space, had to come up with an alternative solution: its own astronaut wings.

It's certainly a very generous use of the term that is bound to ruffle some weathers, particularly when it comes to those who committed much of their life to further space exploration over decades.

Read This Next
Pale Blue Shat
William Shatner Explains Why His Trip to Space Was Horrible
Overview Effect
William Shatner Says His Space Trip Left Him With a Feeling of Terrible Grief
God Shot
Astronaut Says He Had Religious Experience During Spacewalk
And Beyond
How NASA Got Price Gouged on the SLS, According to Its Former Second-in-Command
Billionaire Bailout
Bernie Sanders Working to Block Jeff Bezos From NASA Moon Contract
More on Off World
Trashing Orbit
Yesterday on the byte
Elon Musk Says SpaceX May Build Starship That Dies on Purpose
Cat and Mouse
Yesterday on the byte
SpaceX to Launch "Hunter" Satellites for Targeting Rival Spacecraft
Space In Space
Yesterday on the byte
NASA Official Admits There's a Bit of an Issue on the Space Station
READ MORE STORIES ABOUT / Off World
Keep up.
Subscribe to our daily newsletter to keep in touch with the subjects shaping our future.
+Social+Newsletter
TopicsAbout UsContact Us
Copyright ©, Camden Media Inc All Rights Reserved. See our User Agreement, Privacy Policy and Data Use Policy. The material on this site may not be reproduced, distributed, transmitted, cached or otherwise used, except with prior written permission of Futurism. Articles may contain affiliate links which enable us to share in the revenue of any purchases made.
Fonts by Typekit and Monotype.