How to Make the Universe in a Lab 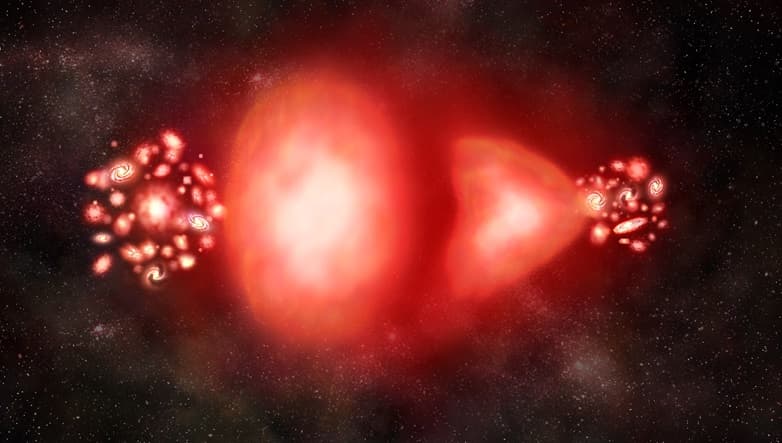 One of the all-time great mysteries in physics is why our universe contains more matter than antimatter, which is the equivalent of matter but with the opposite charge. To tackle this question, an international team of researchers have managed to create a plasma of equal amounts of matter and antimatter – a condition we think made up the early universe.

Matter as we know it appears in four different states: solid, liquid, gas, and plasma, which is a really hot gas where the atoms have been stripped of their electrons. However, there is also a fifth, exotic state: a matter-antimatter plasma, in which there is complete symmetry between negative particles (electrons) and positive particles (positrons).

This peculiar state of matter is believed to be present in the atmosphere of extreme astrophysical objects, such as black holes and pulsars. It is also thought to have been the fundamental constituent of the universe in its infancy, in particular during the Leptonic era, starting approximately one second after the Big Bang.

A Fraction of a Second of Life

One of the problems with creating matter and antimatter particles together is that they strongly dislike each other – disappearing in a burst of light whenever they meet. However, this doesn’t happen straight away, and it is possible to study the behaviour of the plasma for the fraction of a second in which it is alive.

Understanding how matter behaves in this exotic state is crucial if we want to understand how our universe has evolved and, in particular, why the universe as we know it is made up mainly of matter. This is a puzzling feature, as the theory of relativistic quantum mechanics suggests we should have equal amounts of the two. In fact, no current model of physics can explain the discrepancy.

Despite its fundamental importance for our understanding of the universe, an electron-positron plasma had never been produced before in the laboratory, not even in huge particle accelerators such as CERN. Our international team, involving physicists from the UK, Germany, Portugal, and Italy, finally managed to crack the nut by completely changing the way we look at these objects.

Instead of focusing our attention on immense particle accelerators, we turned to the ultra-intense lasers available at the Central Laser Facility at the Rutherford Appleton Laboratory in Oxfordshire, UK. We used an ultra-high vacuum chamber with an air pressure corresponding to a hundredth of a millionth of our atmosphere to shoot an ultra-short and intense laser pulse (hundred billions of billions more intense that sunlight on the Earth surface) onto a nitrogen gas. This stripped off the gas’ electrons and accelerated them to a speed extremely close to that of light.

The beam then collided with a block of lead, which slowed them down again. As they slowed down they emitted particles of light, photons, which created pairs of electrons and their anti-particle, the positron, when they collided with nuclei of the lead sample. A chain-reaction of this process gave rise to the plasma.

However, this experimental achievement was not without effort. The laser beam had to be guided and controlled with micrometer precision, and the detectors had to be finely calibrated and shielded – resulting in frequent long nights in the laboratory.

But it was well worth it as the study, published in Nature Communications, means an exciting branch of physics is opening up. Apart from investigating the important matter-antimatter asymmetry, by looking at how these plasmas interact with ultra powerful laser beams, we can also study how this plasma propagates in vacuum and in a low-density medium. This would be effectively recreating conditions similar to the generation of gamma-ray bursts, some of the most luminous events ever recorded in our universe.