A Probe Detected a Mysterious Signal That Physics Can't Explain

This may be the source of dark matter. 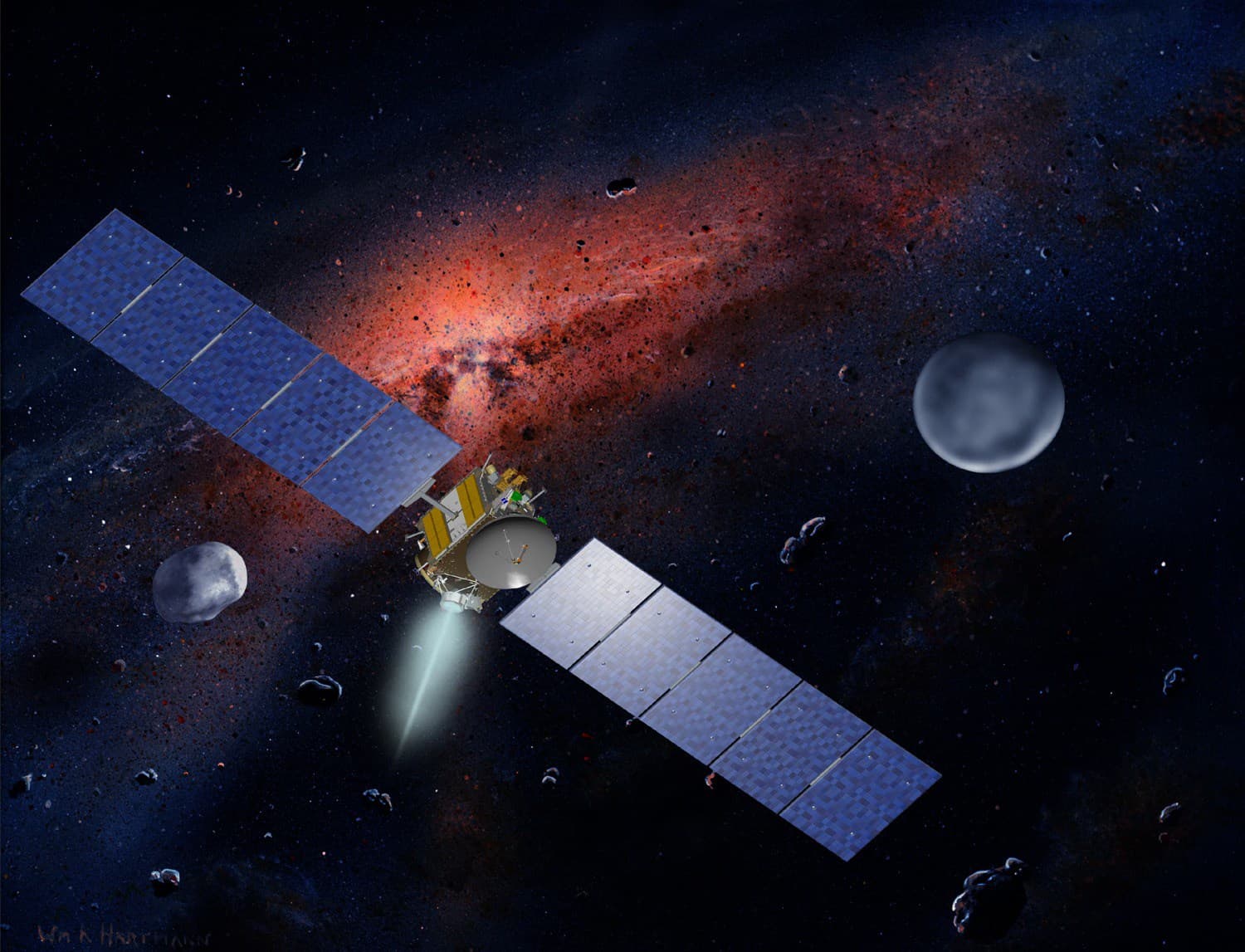 Amidst seemingly endless advances in quantum physics and the hunt for dark matter by American and European scientists, China continues to close the gap in scientific prowess. A China-led space mission has revealed auspicious signs of dark matter, according to recently reported results. Although no direct evidence of dark matter was found, this is the first observational data provided by China's very first mission designed exclusively for astrophysics. The mission represents China's continued progression as a world-power in astrophysics.

The hunt for dark matter has haunted the dreams of astrophysicists for centuries. Ever since Swiss astronomer Fritz Zwicky first discovered that the mass of all particles in the Coma cluster of galaxies constituted a mere one percent of the mass required to generate sufficient gravity needed to prevent the galaxy cluster from dissembling. Physicists have since inferred dark matter's existence from this necessary yet unseen gravitational effect on visible matter.

Named the Dark Matter Particle Explorer (DAMPE), the Chinese spacecraft was designed to seek out an indirect decay signal of long-hypothesized dark matter — known as weakly interacting massive particles (WIMPs). DAMPE was launched from the Jiuquan Satellite Launch Center in the Gobi Desert, roughly 1,600 km (994 miles) west of Beijing, back in December 2015. Its primary tool is a stack of thin, crisscrossing detector strips that assume a common arrangement which allows it to combine observations in one direction. It's also able to observe the energy, vector, and electric charge of particles making up cosmic rays — especially electrons and positrons (the former's antimatter counterpart).

Cosmic rays originate from normal astrophysical phenomena, e.g., supernovae elsewhere in the galaxy. However, if dark matter is made of WIMPs, these particles would sporadically annihilate one another and create electron-positron pairs. These pairs are then detectable as an excess quantity of matter amid the amalgam of particles hailing from traditional astrophysical objects.

In its first 530 days, DAMPE detected 1.5 million cosmic ray electrons and positrons above a specific energy threshold. Researchers ordinarily expect to see a smooth curve of particles-to-energy, but previous experiments suggested an anomalous disruption in that curve.

This data is important because it confirmed that deviation.

"It may be evidence of dark matter," however the curve disruption could "be from some other cosmic ray source," said Chang Jin, leader of the collaboration of the Chinese Academy of Science's (CAS's) Purple Mountain Observatory (PMO) in Nanjing, in a recent Science Magazine article.

“We have a compelling anomaly in the high-energy section, it goes up and then goes down again. We didn't expect this, and it cannot be explained by the existing knowledge of physics," he added in another report. He also noted that the DAMPE probe, previously slated for a 3-year mission in space, is now expected to last 5 years, thanks to the smooth functioning of both spacecraft and instruments.

Even though there is absolutely no guarantee that DAMPE will answer the dark matter mystery, according to the Science Magazine report and David Spergel, an astrophysicist at Princeton University, the Chinese foray into dark matter will inform our understanding of cosmic ray acceleration, and also reveal the underlying physical processes in spatial shocks near supernovae and pulsars.

Read This Next
Monkey Business
China Plans to Send Monkeys to Space Station to Have Sex With Each Other
Sanctions Chess
Russia Says It'll Buy Space Parts From China, But China Says Uhhh Not So Fast
Hello Darkness
NASA Proposes Sending Spacecraft to Measure Mysterious Dark Matter
Sleek and Shiny
China's New Space Station Looks Like an Apple Store Inside
Catching Zs in Space
The Bunks in the Chinese Space Station Are Absolutely Enormous
More on Off World
Appetite for Dest...
Yesterday on the byte
Black Hole In "Hyper-Feeding Frenzy" Chews Through Stars and Shoots Its Leftovers Towards Earth
Lunar RGB
Wednesday on the byte
NASA Shows Off Artemis "Party Mode," Powered by Amazon (TM) Alexa (TM)
Putting Things In...
Tuesday on futurism
Amazing Artemis Photo Shows Every Human, Alive or Dead, Plus the Moon
READ MORE STORIES ABOUT / Off World
Keep up.
Subscribe to our daily newsletter to keep in touch with the subjects shaping our future.
+Social+Newsletter
TopicsAbout UsContact Us
Copyright ©, Camden Media Inc All Rights Reserved. See our User Agreement, Privacy Policy and Data Use Policy. The material on this site may not be reproduced, distributed, transmitted, cached or otherwise used, except with prior written permission of Futurism. Articles may contain affiliate links which enable us to share in the revenue of any purchases made.
Fonts by Typekit and Monotype.