How to Talk to Your Family About Cryptocurrency

So your uncle wants to invest in Bitcoin... 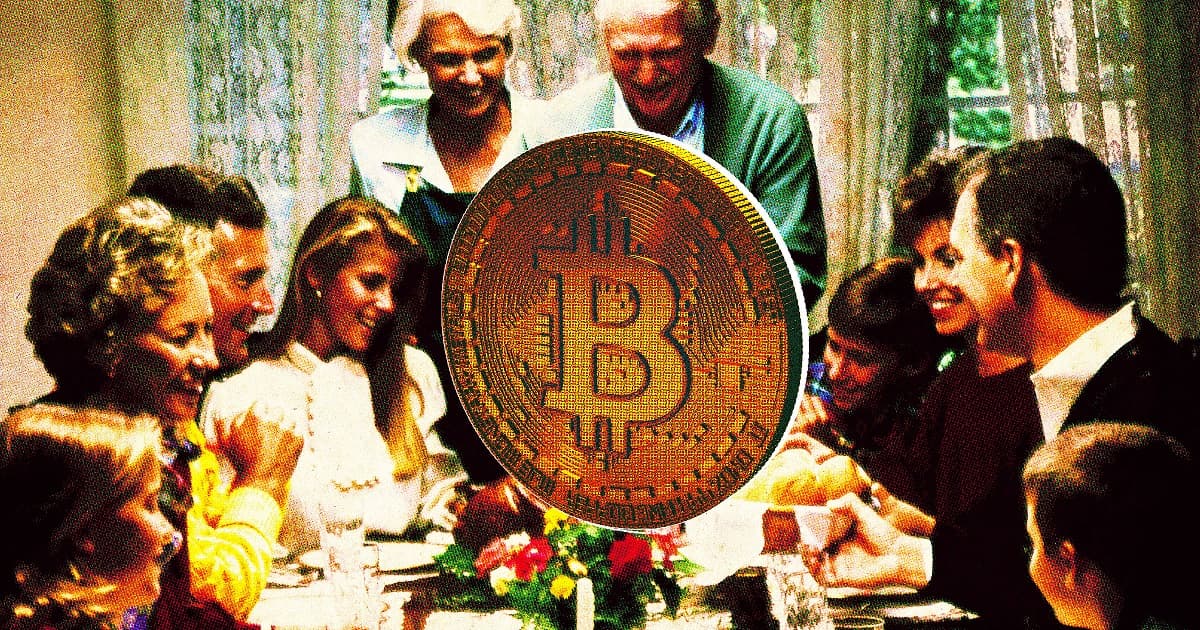 Cryptocurrencies have taken the financial world by storm this year. Practically everybody is talking about digital tokens.

But is it really goodbye US dollar? Not so fast. When your uncle asks if he should invest in some Bitcoin — or Floki, for that matter — you should have some answers ready.

So without further ado, here's your one-stop shop if you want to sound like you know what you're talking about this holiday season.

At the most basic level, cryptocurrencies represent digital money in the form of tokens represented on a digital ledger called a "blockchain." The biggest and most widely adopted one is Bitcoin.

If You Wanna Seem Smart

Bitcoin has hit several new highs as well as lows this year, often spurred and buffeted by comments made by Tesla CEO Elon Musk, not to mention a massive crackdown on cryptocurrency mining — the energy-intensive process that creates new Bitcoins — in China and a more widespread adoption by financial institutions. Even Wall Street is getting on board now, and predicting even higher highs in the future.

Right now, as inflation keeps rising in a post-COVID world, investors are buying up cryptocurrencies in search of a new hedge. In other words, crypto could end up replacing gold for the next generation.

Alternative coins or altcoins are hot on Bitcoin's heels, with tokens like Solana, Ripple, and Dogecoin making major gains.

But at the same time, cryptocurrencies are as volatile as ever, and investors should be wary of making the wrong move. It's a high risk, high reward game. And even your uncle won't be able to predict Musk's next kneejerk reaction.

Tell them that each cryptocurrency transaction still has a massive carbon footprint, which means that investing in cryptocurrencies is akin to buying oil and gas stock.

Read This Next
Regulating Crypto
Hillary Clinton Calls Out Crypto Exchanges for Letting Russia Bypass Sanctions
Sad!
Melania Trump Accused of Secretly Buying Her Own NFT to Avoid Disgrace
Greenwashing
World Wildlife Foundation Cancels NFT Project After Critics Point Out That It Was Actually a Huge Polluter
Stoking the Fire
Gaming Exec Says His Customers Are Idiots For Not Understanding How Great NFTs Are
Art Flop
Independent Artists Say NFTs Are the Bane of Their Existence
More on Future Society
Bird Crap
6:30 PM on the byte
It Looks Like Elon Musk Is Actually Building a Twitter Payment Platform
Balloon News
Yesterday on futurism
China Says "Spy Balloon" Soaring Over America Is Completely Innocent
Down in Flames
Wednesday on the byte
Elon Musk Apparently Thinks Twitter Is a "Flaming Dumpster Rolling Down the Street"
READ MORE STORIES ABOUT / Future Society
Keep up.
Subscribe to our daily newsletter to keep in touch with the subjects shaping our future.
+Social+Newsletter
TopicsAbout UsContact Us
Copyright ©, Camden Media Inc All Rights Reserved. See our User Agreement, Privacy Policy and Data Use Policy. The material on this site may not be reproduced, distributed, transmitted, cached or otherwise used, except with prior written permission of Futurism. Articles may contain affiliate links which enable us to share in the revenue of any purchases made.
Fonts by Typekit and Monotype.