"I would hope somebody at the Treasury Department is trying to figure out how to rein in the leaky valves in the crypto market." 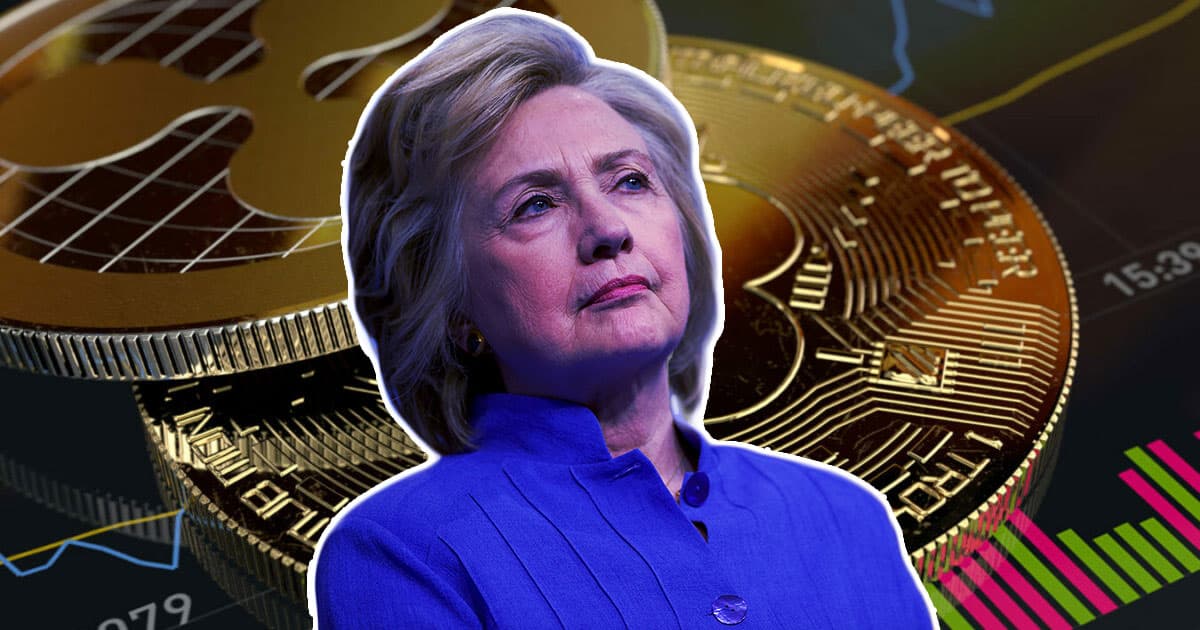 Russians are still able to use cryptocurrency exchanges to circumvent newly imposed sanctions in response to the country's invasion of Ukraine — and former Secretary of State Hillary Clinton isn't happy.

"I was disappointed to see that some of the so-called crypto exchanges, not all of them, but some of them, are refusing to end transactions with Russia," Clinton told Rachel Maddow on MSNBC earlier this week, calling for everybody to "do as much as possible to isolate Russian economic activity right now."

"I would hope somebody at the Treasury Department is trying to figure out how to rein in the leaky valves in the crypto market that might allow Russia to escape the full weight of the sanctions," Clinton told Maddow.

The Biden administration has imposed multiple rounds of sanctions at Russia and its oligarchs over the nation's aggressive invasion of Ukraine.

The issue is that cryptocurrency exchanges are currently operating in a murky legal vacuum, allowing Russian actors to bypass the sanctions and funnel money in and out of the country.

In fact, while the Russian ruble is getting absolutely crushed, cryptocurrencies like Bitcoin and Ethereum are rallying.

Mainstream crypto exchanges such as Coinbase or Binance have yet to implement blanket bans on Russian citizens, as Decrypt points out. But if there ever were new sanctions that would forbid Russian citizens from making crypto transactions, they would likely abide.

"I think there is a reputation issue here," Tom Keatinge, founding Director of the Centre for Financial Crime and Security Studies, told Decrypt earlier this week. "Do you want now or after the fact to be known as the exchange that facilitated sanctions evasion, even if it were not technically illegal?"

Clinton isn't alone in calling exchanges to crack down on Russian users. Ukrainian vice prime minister Mykhailo Fedorov also called on exchanges to "freeze not only the addresses linked to Russian and Belarusian politicians, but also to sabotage ordinary users," in a tweet over the weekend.

Strangely enough, Ukraine is actively collecting donations via public Bitcoin and Ethereum wallets to fund its war efforts, collecting over $30 million total as of Tuesday.

"Ukrainian crypto community is ready to provide a generous reward for any information about crypto wallets of Russian and Belarusian politicians and their surroundings," Fedorov said in a separate tweet. "War crimes must be pursued and punished."

Even before Russia invaded Ukraine, Clinton has been a major supporter of regulating blockchain, calling on the White House to ensure crypto won't end up undermining the US dollar and other fiat currencies late last year.

While US lawmakers have yet to make significant headway, there are at least some early signs of future regulation.

Jerome Powell, chairman of the US Federal Reserve, recently suggested that the current conflict "underscored the need for Congressional action on digital finance including cryptocurrencies," during a March 2 testimony in front of the House Financial Services Committee.

For now, Russians are able to offload assets via cryptocurrencies to circumvent sanctions. And whether the invasion of Ukraine will lead to enough pressure from the international community for the US to act remains to be seen.

More on crypto: NFT Scammers Are Using a Sneaky Trick to Make Their JPGs Seem Like They're Worth a Fortune

Read This Next
Read the Room
Elon Musk Fans Horrified as He Suggests Ukraine Give in to Putin's Demands
Finger Pointing
Russia Warns That Nuclear Plant It Captured May Leak Waste Over Europe
Sobering News
Ukrainian Hackers Allegedly Cut Off Russian Soldiers' Beloved Vodka Supply
Hell on Earth
Internet Aghast at AI Facial Recognition Used to Identify Dead Russian Soldiers
Fake Surrender
Hackers Deepfaked a Video of the Ukrainian President Telling His Soldiers to Surrender
More on Future Society
Gas Giant
Yesterday on the byte
Journalist Eats Lab-Grown Chicken, Gets "Weirdly Gassy"
Musk Rats
Thursday on the byte
Twitter Is Quietly Re-Suspending the Lunatics Elon Musk Let Back On
Going Wireless
Wednesday on futurism
Hackers Took Over a Subdomain of Wired.com for Several Months and Replaced It With Sleazy Online Casino Content
READ MORE STORIES ABOUT / Future Society
Keep up.
Subscribe to our daily newsletter to keep in touch with the subjects shaping our future.
+Social+Newsletter
TopicsAbout UsContact Us
Copyright ©, Camden Media Inc All Rights Reserved. See our User Agreement, Privacy Policy and Data Use Policy. The material on this site may not be reproduced, distributed, transmitted, cached or otherwise used, except with prior written permission of Futurism. Articles may contain affiliate links which enable us to share in the revenue of any purchases made.
Fonts by Typekit and Monotype.