Facebook Shows Off Gloves That Allow You to "Feel" VR Objects

Facebook is seriously committed to getting between you and reality. 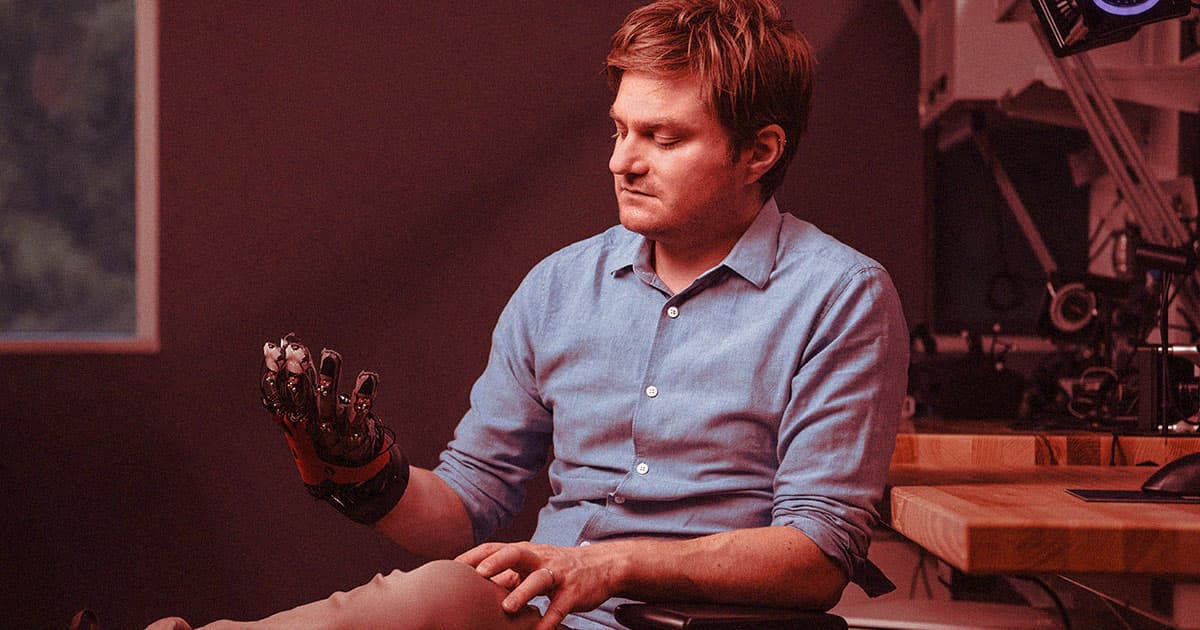 Facebook is really committed to getting between you and reality, and the gloves are starting to come off — or, rather, on.

With its newly announced plans to build out a metaverse, the social network has now announced that it's building a haptic glove, a wearable meant to enable you to "touch" objects in the metaverse. Oh yeah, and it's changing its name to "Meta."

"The value of hands to solving the interaction problem in AR and VR is immense," said Facebook Reality Labs research director Sean Keller in a blog post. "People could touch, feel and manipulate virtual objects just like real objects — all without having to learn a new way of interacting with the world."

In short, Meta is trying to turn the novel "Ready Player One" into a reality. Or perhaps, it's trying to rip off Nintendo's ahead-of-its-time Power Glove.

The company's glove is meant to be light, soft, and also perfectly capture its wearer's hand movements. It's being designed to reproduce "a range of complex, nuanced sensations for the wearer such as pressure, texture, and vibration to create the effect of feeling a virtual object with your hands," according to the company.

In other words, Meta is setting the bar extremely high.

"We’re creating almost everything about this discipline from scratch," Keller said. "We’re learning how people perceive the sensations of touch and how they complete tasks. We’re figuring out how to fit the whole variety of human hand shapes and sizes, while maintaining mechanical coupling to the user."

As of right now, the glove is using hundreds of tiny actuators to trick the wearer into thinking they're touching something in the virtual world. But they're far from ideal, creating too much heat. They're also too bulky, expensive, and power hungry, according to the company.

"If you need thousands of tangible forces in different locations at different distances, you either need pneumatics, hydraulics, or high-density electroactive actuators," Reality Labs hardware engineering director Tristan Trutna said in the post.

The team is now looking into using electrical fields and pneumatic actuators to trick your hands into feeling something.

But that leaves one big question still looming: do we need Meta's gloves to make its metaverse feel any more real? The company is betting big on virtual reality, arguing that three-dimensional, cartoonized avatars of our physical bodies will eventually replace human interaction we crave so much — especially after nearly two years of COVID lockdowns.

It's a bet so big that it's starting to annoy the company's own VPs.

Meta has also repeatedly made one thing clear: it cannot be trusted. Despite being used by billions of people around the world, the network has helped drive people apart, profited directly from pushing provocative content, and continuously leaked sensitive personal data.

And the company isn't inviting you to play a game for an hour, then take the VR goggles off. Meta's ambitions appear to be much larger in scope than that — and its haptic glove is only the latest example.

Allowing the company to take control over our physicality and sense of touch should come as a warning sign. And we should probably think twice before committing ourselves to its metaverse.

Read This Next
TV for Your Face
Elon Musk Says the Metaverse Sucks and Neuralink Will Be Better
Breakthrough Technologies
Facebook Hardware Devs Reportedly Skeptical of Metaverse
Not On My Wrist
Facebook's Neural Wristband Actually Sounds Pretty Cool
Facebook Huh
Facebook Shows Off Neural "Wristbands" to Control AR Glasses
Main Screen Turn On
FCC Clears Google To Pursue "Minority Report"-Like Gesture System
More on Robots & Machines
From the Dept. of...
12:00 AM on futurism
The Best Wireless Mouse of 2023
Balloon Boy
Yesterday on the byte
Other Chinese Balloons Apparently Flew Over America, But Nobody Noticed Them
From the Dept. of...
Yesterday on futurism
The Best Desks of 2023
READ MORE STORIES ABOUT / Robots & Machines
Keep up.
Subscribe to our daily newsletter to keep in touch with the subjects shaping our future.
+Social+Newsletter
TopicsAbout UsContact Us
Copyright ©, Camden Media Inc All Rights Reserved. See our User Agreement, Privacy Policy and Data Use Policy. The material on this site may not be reproduced, distributed, transmitted, cached or otherwise used, except with prior written permission of Futurism. Articles may contain affiliate links which enable us to share in the revenue of any purchases made.
Fonts by Typekit and Monotype.