Is this really the future of augmented reality? 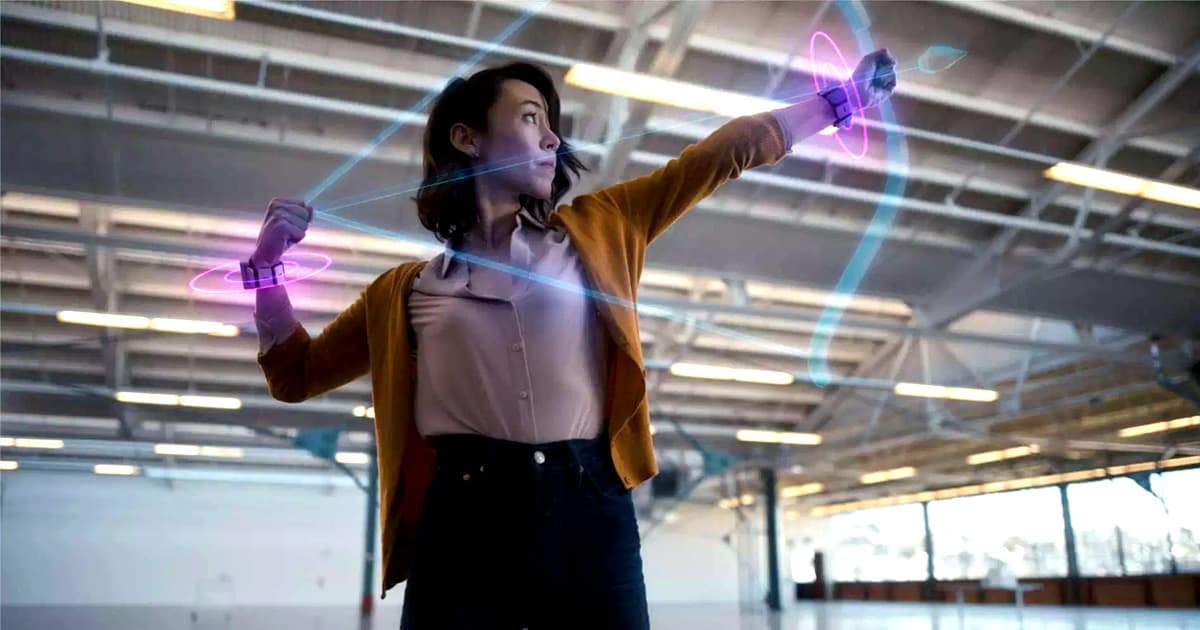 Facebook has teased a wristband-based augmented reality controller that could integrate the technology into our daily lives more seamlessly than ever — if the company is to be believed.

Last year, CEO Mark Zuckerberg announced that Facebook was getting set to release a pair of AR glasses as soon as 2021. Since then, we've gotten sparse details about the project, run by Facebook Reality Labs (FRL).

The company elaborated on its vision earlier this month, announcing that it's hoping to augment the glasses with a new interface via a "soft wristband" designed to read signals from the spinal cord and use them to control the glasses.

This week, Facebook released a new video, showing off a prototype of the wrist-worn device. It's chunky and features a small screen.

According to the company's claims, the device picks up signals from a user's nervous system rather than forcing you to move your entire arm.

In a new blog post detailing its latest efforts, Facebook said that a fully fleshed out vision of augmented reality is still many years out. Instead, the company decided to take "a closer look at a version that may be possible much sooner: wrist-based input combined with usable but limited contextualized AI, which dynamically adapts to you and your environment."

On the wrist, the company says, the device is able to read neural data being sent to your hands from your brain, a wealth of information that can be interpreted using EMG or electromyography.

These signals can then be turned into commands; the movement of a mouse or a simple mouse click, for instance, as shown off in the demo below.

"What we’re trying to do with neural interfaces is to let you control the machine directly, using the output of the peripheral nervous system — specifically the nerves outside the brain that animate your hand and finger muscles," FRL Director of Neuromotor Interfaces Thomas Reardon said in the blog post.

The same technology could even be applied to typing on a non-existent keyboard, as demonstrated below.

"The signals through the wrist are so clear that EMG can understand finger motion of just a millimeter," the company notes in the post. "That means input can be effortless. Ultimately, it may even be possible to sense just the intention to move a finger."

Facebook admits that plenty of "technical challenges remain" before its wrist worn interface can come to market.

Time will also tell if consumers are ready for wearing AR glasses, let alone using armbands to control the glasses' interface — that is, if Facebook's tarnished brand when it comes to privacy isn't already enough of a turn off.

More on the glasses: Facebook Shows Off Neural “Wristbands” to Control AR Glasses

Read This Next
Oh, Good
Oculus Founder Builds VR Headset That Kills User If They Die in Game
Gloves Off
Facebook Shows Off Gloves That Allow You to "Feel" VR Objects
Breakthrough Technologies
Facebook Hardware Devs Reportedly Skeptical of Metaverse
Powered by Powerpoint
The CEO of Apple Thinks People Will Use Augmented Reality for Something Absolutely Hilarious
Facebook Huh
Facebook Shows Off Neural "Wristbands" to Control AR Glasses
More on Robots & Machines
It's Nothing Pers...
7:15 PM on the byte
Scientists Create Shape-Shifting Robot That Can Melt Through Prison Bars
From the Dept. of...
12:00 AM on futurism
The Best Smart Lights of 2023
From the Dept. of...
Yesterday on futurism
The Best Mini Instant Pots of 2023
READ MORE STORIES ABOUT / Robots & Machines
Keep up.
Subscribe to our daily newsletter to keep in touch with the subjects shaping our future.
+Social+Newsletter
TopicsAbout UsContact Us
Copyright ©, Camden Media Inc All Rights Reserved. See our User Agreement, Privacy Policy and Data Use Policy. The material on this site may not be reproduced, distributed, transmitted, cached or otherwise used, except with prior written permission of Futurism. Articles may contain affiliate links which enable us to share in the revenue of any purchases made.
Fonts by Typekit and Monotype.