New hardware could require "breakthroughs in physics" to realize. 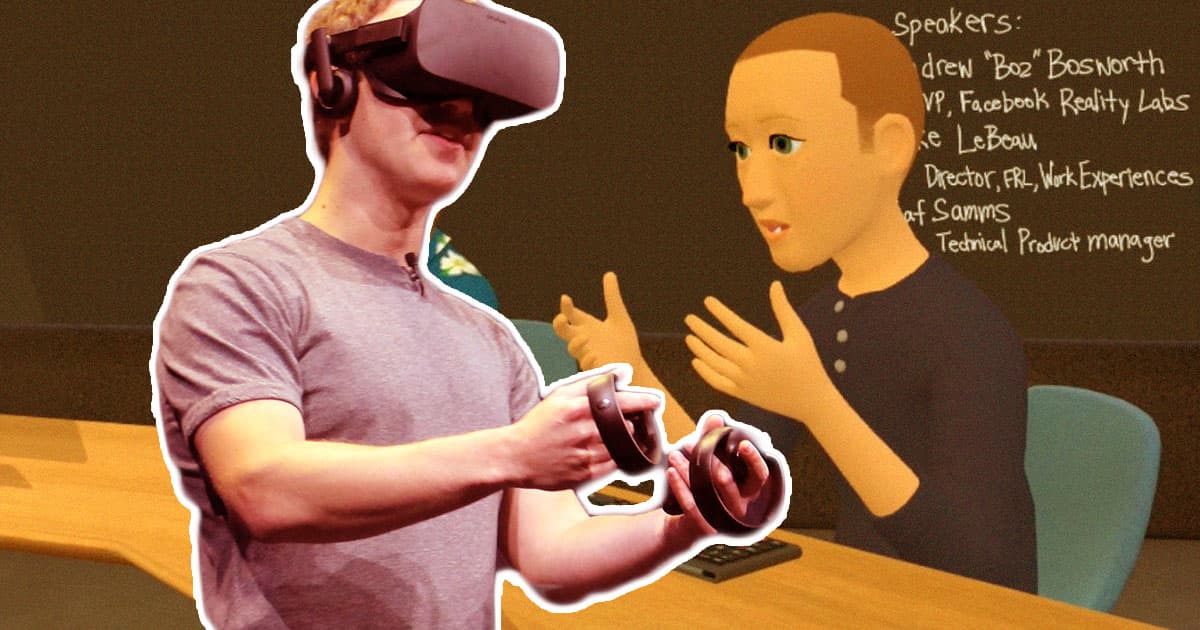 During today's announcement, Facebook revealed that it's rebranding itself as "Meta" — a huge play to virtual and augmented reality technologies, in an effort to replace users' reality wholesale.

In a tech demo, Facebook execs showed off impressive augmented reality versions of their own physical bodies — credit where credit is due — in the form of uncanny renderings that had an impressive amount of detail, down to the pores of their skin.

It's a wild conceptualization of an augmented reality future, but as CEO Mark Zuckerberg himself admitted, the technology is still years out — that is, if the laws of physics will even allow it in the first place.

Facebook hardware insiders told The New York Times tech reporter Mike Isaac that "this is going to take a long time, i.e. breakthroughs in physics, etc." according to a tweet.

In simple terms, Facebook may have egregiously oversold its promises when it comes to hanging out with your best mates inside a Facebook-hosted metaverse. Technical challenges so profound that they'll require new understandings of physics aren't going to make it easy for Facebook to bring its products to the market any time soon.

And without the hardware, Facebook doesn't have much to show for its cozy parallel reality, a walled garden it will likely want full control over at the end of the day.

Of course, that's a limited number of employees talking to one reporter. And it does sound as though Facebook — or uh, sorry, Meta — is planning to throw some immense resources behind the effort.

It's worth noting that Facebook has dabbled in virtual and augmented reality over the past few years, bringing some widely-respected virtual reality headsets under its Oculus brand to market. But the best of those headsets are still clunky, and they come with a limited ecosystem of apps and experiences. To succeed at the metaverse, the company will have to go much farther.

Oh, did we mention Facebook retired that brand today?

Facebook also recently attempted to wade into the mainstream wearables market with a collaboration with Ray-Ban. But the product couldn't be more different than what Facebook showed off today. It's a plastic pair of glasses with a smartphone camera attached to it — which is not exactly going to fool anybody into thinking their best friend is sitting next to them on their couch.

With today's tech demo, Zuckerberg is likely attempting to distract from a pretty ugly truth: the Facebook brand is incredibly tarnished in the year 2021, with regulators, lawmakers, and even entire governments calling it out for failing to reign in — and even unintentionally promoting — hate speech on its platform.

Read This Next
TV for Your Face
Elon Musk Says the Metaverse Sucks and Neuralink Will Be Better
Gloves Off
Facebook Shows Off Gloves That Allow You to "Feel" VR Objects
Powered by Powerpoint
The CEO of Apple Thinks People Will Use Augmented Reality for Something Absolutely Hilarious
Not On My Wrist
Facebook's Neural Wristband Actually Sounds Pretty Cool
Facebook Huh
Facebook Shows Off Neural "Wristbands" to Control AR Glasses
More on Robots & Machines
FROM THE DEPT. OF...
Thursday on futurism
Best Charging Stations in 2022
FROM THE DEPT. OF...
Wednesday on futurism
Best Vintage Turntables in 2022
FROM THE DEPT. OF...
Wednesday on futurism
Best Gaming Chairs Under $100
READ MORE STORIES ABOUT / Robots & Machines
Keep up.
Subscribe to our daily newsletter to keep in touch with the subjects shaping our future.
+Social+Newsletter
TopicsAbout UsContact Us
Copyright ©, Camden Media Inc All Rights Reserved. See our User Agreement, Privacy Policy and Data Use Policy. The material on this site may not be reproduced, distributed, transmitted, cached or otherwise used, except with prior written permission of Futurism. Fonts by Typekit and Monotype.