Former Facebook Exec Says Zuckerberg Has Surrounded Himself With Sycophants

"He's fallen for their vision of the future, which no one else is interested in." 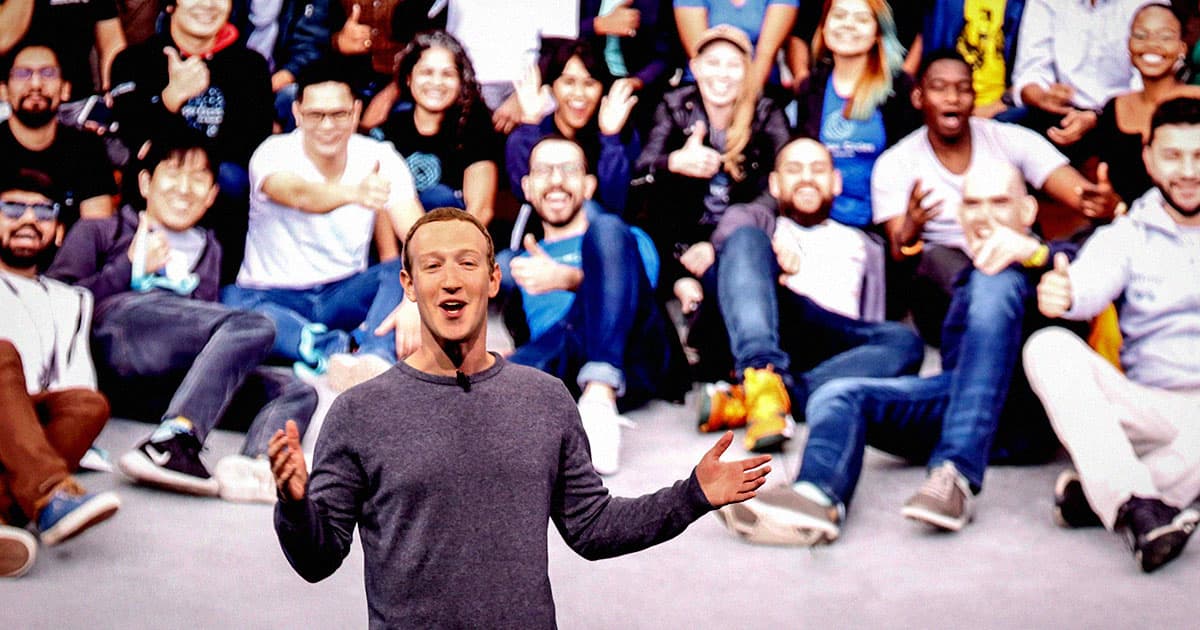 In just about a year, Facebook-turned-Meta CEO Mark Zuckerberg's metaverse vision has cost his company upwards of $15 billion, cratering value and — at least in part — triggering mass company layoffs. That's a high price tag, especially when the Facebook creator has shockingly little to show for it, both in actual technology and public interest.

Indeed, it seems that every time Zuckerberg excitedly explains what his currently-legless metaverse will one day hold, he's met with crickets — and a fair share of ridicule — at the town square. Most everyone finds themselves looking around and asking themselves the same question: who could this possibly be for, other than Zucko himself?

That question, however, doesn't really seem to matter to the swashzuckling CEO, who's either convinced that the public wants and needs his metaverse just as much as he does, or is simply just convicted to the belief that one day people will finally get it. After all, he's bet his company on this thing and needs the public to engage to stay financially viable long-term.

And sure, points for conviction. But conviction is easy if you're surrounded by a bunch of yes men — which, according to Vanity Fair, the founder unfortunately is. And with $15 billion down the line, that may not bode well for the Silicon Valley giant.

"The problem now is that Mark has surrounded himself with sycophants, and for some reason he's fallen for their vision of the future, which no one else is interested in," one former Facebook exec told Vanity Fair. "In a previous era, someone would have been able to reason with Mark about the company's direction, but that is no longer the case."

Given that previous reports have revealed that some Meta employees have taken to marking metaverse documents with the label "MMA" — "Make Mark Happy" — the revelation that he's limited his close circle to people who only agree with him isn't all that shocking. He wants the metaverse, he wants it bad, and he's put a mind-boggling amount of social and financial capital into his AR-driven dream.

While the majority of his many thousands of employees might disagree with him — Vanity Fair reports that current and former metamates have written things like "the metaverse will be our slow death" and "Mark Zuckerberg will single-handedly kill a company with the metaverse" on the Silicon Valley-loved Blind app — it's not exactly easy, or even that possible, to wrestle with the fact that you may have made a dire miscalculation this financially far down the road.

And if you just keep a close circle of people who just agree with you, you may not really have to confront that potential for failure. At least not for a while.

The truth is that Zuckerberg successfully created a thing that has impacted nearly every single person on this Earth. Few people can say that. And while it can be argued that the thing he built has, at its best, created some real avenues for connection, that same creation also seems to have led to his own isolation, in life and at work.

How ironic it is that he's marketed his metaverse on that same promise of connection, only to become more disconnected than ever.

READ MORE: "Mark Has Surrounded Himself with Sycophants": Zuckerberg's Big Bet on the Metaverse Is Backfiring [Vanity Fair]

More on the Meta value: Stock Analyst Cries on Tv Because He Recommended Facebook Stock

Read This Next
Scammers Scam On
The Fyre Fest Guy Is Off House Arrest and of Course His New Scheme Involves the Metaverse and Crypto
Virtual Signing
Sign Language in Virtual Reality Actually Looks Kinda Awesome
Zesus
Interesting Theory: Mark Zuckerberg Is Trying to Become God and Build Heaven
Uh Oh
Research Confirms TikTok Is a Cesspool of Misinformation
Make Mark Happy
Facebook Employees Seem Completely Confused by the Metaverse
More on Future Society
Unorthodox Urinal
Friday on the byte
Scientists Say They've Figured Out the Ideal Urinal for Not Splashing Back
Abso-Effing-Lutely
Friday on futurism
Free Speech Absolutist Elon Musk Discovers That Some Speech Is Unacceptable After All
Might See Nonsense
Friday on futurism
MSN Fired Its Human Journalists and Replaced Them With AI That Started Publishing Fake News About Mermaids and Bigfoot
READ MORE STORIES ABOUT / Future Society
Keep up.
Subscribe to our daily newsletter to keep in touch with the subjects shaping our future.
+Social+Newsletter
TopicsAbout UsContact Us
Copyright ©, Camden Media Inc All Rights Reserved. See our User Agreement, Privacy Policy and Data Use Policy. The material on this site may not be reproduced, distributed, transmitted, cached or otherwise used, except with prior written permission of Futurism. Articles may contain affiliate links which enable us to share in the revenue of any purchases made.
Fonts by Typekit and Monotype.