Elon Musk Has Some Strong Opinions About Cyberpunk 2077

"I cried myself to sleep and haven't been able to function." 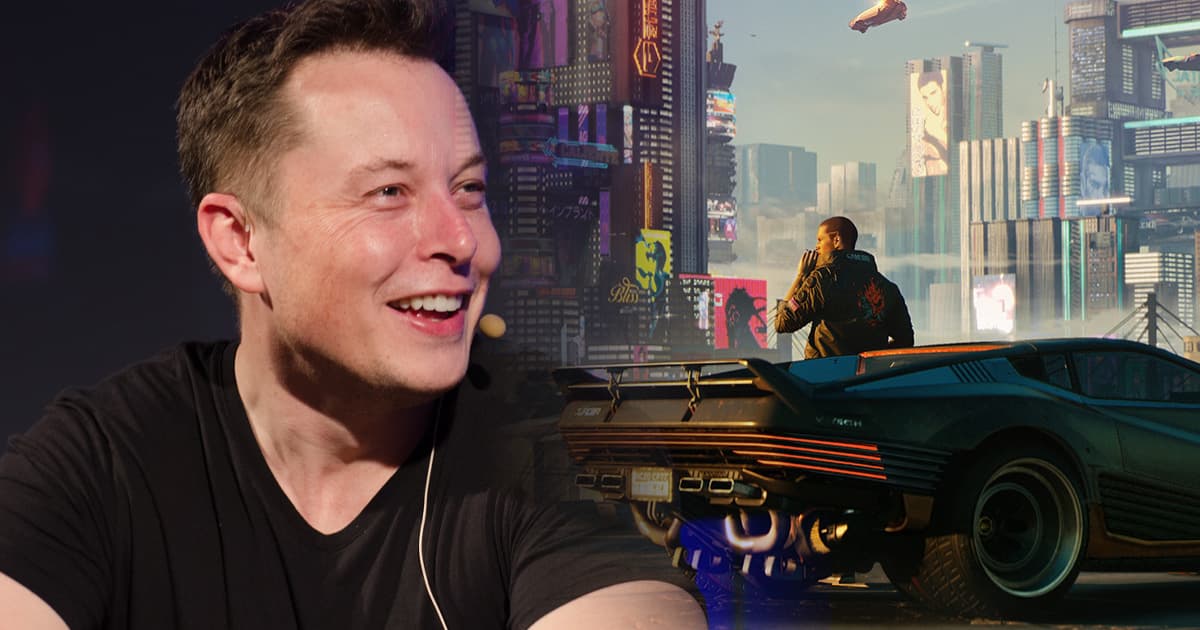 Even The New York Times is now reporting that long-awaited videogame Cyberpunk 2077 is plagued by bugs and crashes. In fact, the game's developers officially apologized today and have offered to refund frustrated gamers.

Things got even stranger when Tesla CEO and cyberpunk genre enthusiast Elon Musk offered up his own two cents on the matter. It's not uncharacteristic of the billionaire to wade into meaningless internet discourse, memes ablaze. Besides, if a CNET story is to be believed, the entrepreneur may have his own cameo in the game as well.

In reply to an official statement posted by the game's official Twitter account, Musk posted a screenshot of a Reddit thread in which a downcast anonymous player dealt with their existential dread — a summary, albeit extreme, of the disappointment felt by many.

"I took a week off work to play this game and I quickly realized it's not the game I've been thinking about every day for eight years," the post in the screenshot read. "I cried myself to sleep and haven't been able to function. I end up crying whenever I think about the game and I don't even want to touch my PS4."

Musk also posted a crude meme of Michael Scott, lead character of the hit TV series "The Office" played by Steve Carrell, crudely and suggestively sticking his index finger through the crotch of his pants with the title of the game layered on top of it. It may seem apropos of nothing, but the meme is likely a reference to a astonishing glitch that caused "rogue penises" to stick out of characters' clothes, as Engadget put it.

Musk, never known for his maturity online, also posted several more memes on the topic of genitals during his tweet spree.

Musk did however admit that he had a chance to play the game "briefly" in a separate tweet. In that post, he sounded more enthusiastic — raising the possibility that he had been poking fun at the game in the Reddit screenshot.

"Seems pretty good," read his curt review. "I picked Nomad, so start was a little slow, but picks up fast."

Read This Next
Rough
Elon Musk's Twitter Is Reportedly Failing Miserably to Contain Horrific Child Abuse Content
I Silence Thee
Leaked Messages Seem to Show Elon Musk Using Twitter to Punish His Enemies
Enemy Mine
Elon Musk Now Denies That His Family's Emerald Mine Existed, In Spite of Previously Bragging About It
Will Somebody Think of the Children?
Mom Horrified by What Her Kids Are Seeing in Roblox
Bot Rush
An Overwhelming Number of Porn Bot Accounts "Drowned Out" Chinese Protest Content on Twitter
More on Future Society
YouTube Propaganda
Monday on the byte
Experts Say There's Something Very Weird About North Korean YouTubers
Bird Crap
Feb 4 on the byte
It Looks Like Elon Musk Is Actually Building a Twitter Payment Platform
Balloon News
Feb 3 on futurism
China Says "Spy Balloon" Soaring Over America Is Completely Innocent
READ MORE STORIES ABOUT / Future Society
Keep up.
Subscribe to our daily newsletter to keep in touch with the subjects shaping our future.
+Social+Newsletter
TopicsAbout UsContact Us
Copyright ©, Camden Media Inc All Rights Reserved. See our User Agreement, Privacy Policy and Data Use Policy. The material on this site may not be reproduced, distributed, transmitted, cached or otherwise used, except with prior written permission of Futurism. Articles may contain affiliate links which enable us to share in the revenue of any purchases made.
Fonts by Typekit and Monotype.