Not everything that goes up has to come down. 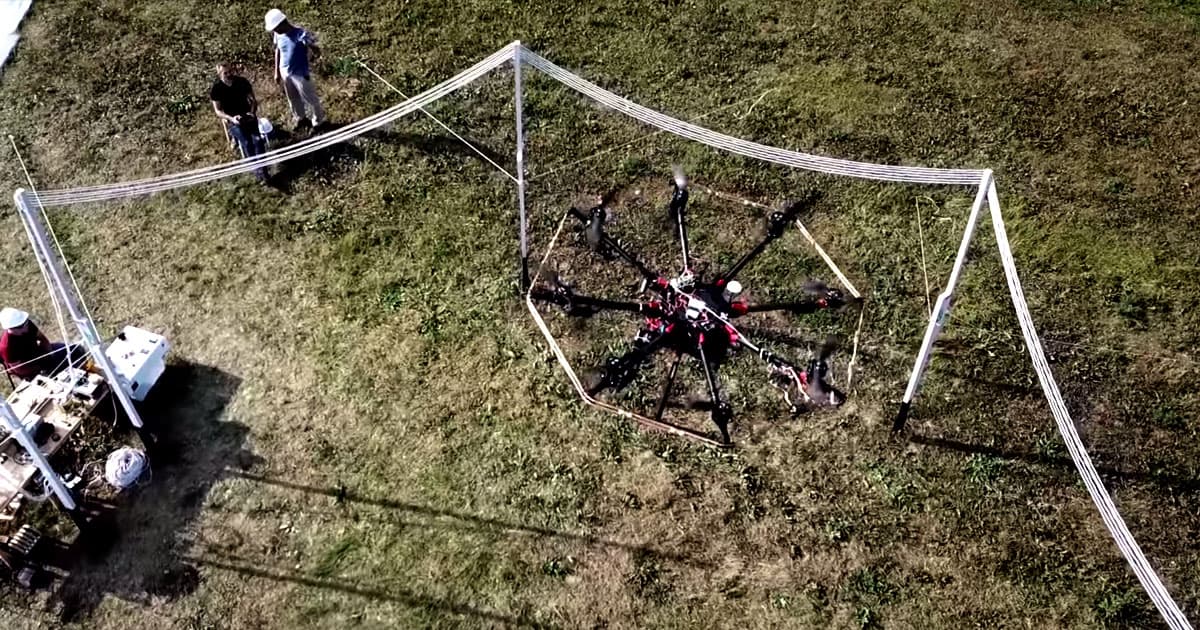 The days of landing a drone to recharge it could be coming to an end.

On Sunday, entertainment vlogger David Fordham published an interview with William Kallman, co-founder of wireless tech company Global Energy Transmission (GET). In the video, recorded from the floor of the 2019 Consumer Electronics Showcase, Kallman describes how his company has found a way to use an electromagnetic field to keep drones in the air indefinitely — and the potential impact of the tech is hard to overstate.

According to Kallman, GET has found a way to create a "power cloud" that can charge a drone while it's in flight.

The system comprises a ground-based power station with a frame of wires positioned in a roughly circular shape. When turned on, this creates an electromagnetic field in the air near the station. A drone equipped with a special antennae charges by flying into the range of the power cloud.

For Better or Worse

It's hard to overstate the potential for drones to change our world, but for seemingly every positive use for the machines (package delivery, search and rescue operations), there's a negative one to consider (military weaponry, citizen surveillance).

So, sure, a drone that never needs to land would be amazingly beneficial for moviemaking and sports coverage — two uses Kallman notes in the interview — but it's hard to imagine military or government officials wouldn't be highly interested in GET's drone charging tech as well.

More on drone charging: Shoot This Military Drone With a Laser, and It’ll Stay in the Air Indefinitely

Read This Next
FROM THE DEPT. OF THINGS TO BUY
The Best Science Gifts of 2023
Drone Tanker News
The US Navy Just Used a Drone to Refuel a Fighter Jet in Midair
Killer Copter
Middle Eastern Nation First to Buy Drone Armed With Machine Gun
Typical Day In Russia
Watch Russia's New Shotgun-Wielding Drone in Action
Worker Bees
Bionic Bees With Electronic Backpacks Could Replace Farm Drones
More on Robots & Machines
From the Dept. of...
12:00 AM on futurism
The Best Mini Fridges of 2023
Blow Up Doll
Monday on the byte
Ukraine Accuses Russia of Using Inflatable "Dummy Tanks," Which Deflated
From the Dept. of...
Monday on futurism
The Best UPS Battery Backups of 2023
READ MORE STORIES ABOUT / Robots & Machines
Keep up.
Subscribe to our daily newsletter to keep in touch with the subjects shaping our future.
+Social+Newsletter
TopicsAbout UsContact Us
Copyright ©, Camden Media Inc All Rights Reserved. See our User Agreement, Privacy Policy and Data Use Policy. The material on this site may not be reproduced, distributed, transmitted, cached or otherwise used, except with prior written permission of Futurism. Articles may contain affiliate links which enable us to share in the revenue of any purchases made.
Fonts by Typekit and Monotype.