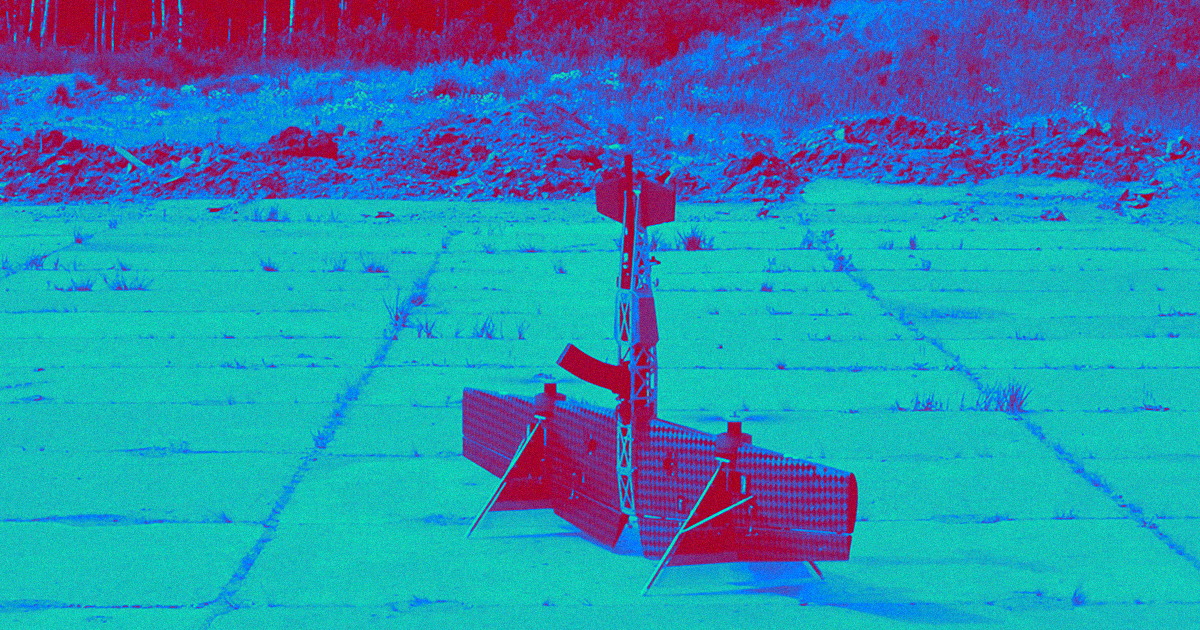 Earlier this year, Russian weapons manufacturer Almaz-Antey filed a patent for a new drone that was little more than a shotgun with wings.

When Futurism first reported on the drone, details were scarce. But now, video footage of flight tests has surfaced showing the drone — which looks like a murderous model plane ­— in action.

The drone carries a 12-caliber Vepr-12 semi-automatic shotgun, Tom's Guide reports. One might justifiably expect the recoil of a shotgun blast to send a drone veering off course, but that doesn't seem to be the case.

Scientists from the Moscow Aviation Institute who worked on the drone published a press release saying that the drone can continue on its path after firing, and that its electric battery allows for 40 minutes of uninterrupted flight.

Video footage shows the drone taking off and landing with its nose — and barrel — pointed straight into the air.

But when all else fails, a video shows that a human can remove the drone's wings and shoot it just like any other shotgun.

Read This Next
FROM THE DEPT. OF THINGS TO BUY
The Best Science Gifts of 2023
"Hoodwinked"
New Pentagon Group Accused of Trying to "Bury" UFOs Again
Hmmmmmm
The Pentagon Just Released Its UFO Report
Drone Tanker News
The US Navy Just Used a Drone to Refuel a Fighter Jet in Midair
Crush Depth
Debris Found From Missing Submarine, All Crew Presumed Dead
More on Robots & Machines
From the Dept. of...
12:00 AM on futurism
The Best Exercise Bikes of 2023
It's Nothing Pers...
Yesterday on the byte
Scientists Create Shape-Shifting Robot That Can Melt Through Prison Bars
From the Dept. of...
Yesterday on futurism
The Best Smart Lights of 2023
READ MORE STORIES ABOUT / Robots & Machines
Keep up.
Subscribe to our daily newsletter to keep in touch with the subjects shaping our future.
+Social+Newsletter
TopicsAbout UsContact Us
Copyright ©, Camden Media Inc All Rights Reserved. See our User Agreement, Privacy Policy and Data Use Policy. The material on this site may not be reproduced, distributed, transmitted, cached or otherwise used, except with prior written permission of Futurism. Articles may contain affiliate links which enable us to share in the revenue of any purchases made.
Fonts by Typekit and Monotype.