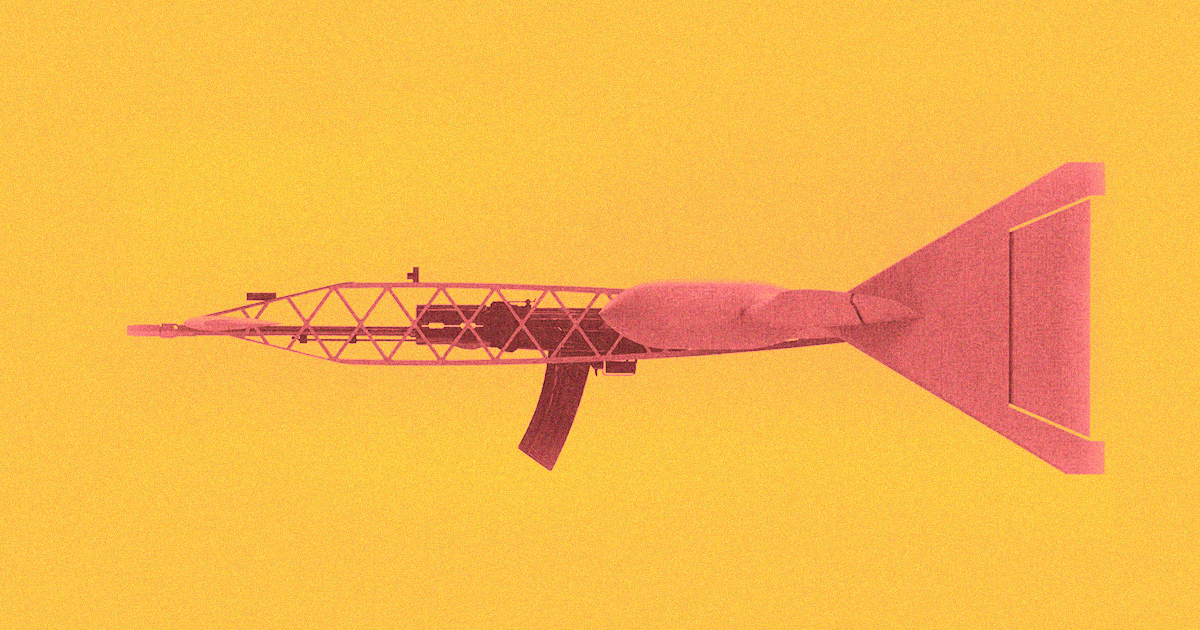 A February 2018 patent filed with the Russian Federal Service for Intellectual Property suggest that Russian arms maker Almaz-Antey has invented a flying drone that features a rifle reminiscent of Kalashnikov's iconic AK-47.

Details are predictably sparse: a series of images show an extremely rudimentary design, featuring a center fuselage with a built-in rifle section and a plane-like wing design — but it evokes a terrifying vision of the future of warfare in which small, expendable drones can pepper enemy troops with small-arms fire.

What's not clear at all is how the drone is powered. The images show no clear method of propulsion, motor or rotors.

It's also not entirely clear what firearm the bizarre contraption features. C4isrnet suggests it's a Vepr 12 shotgun, a variant of the AK rifle series. Business Insider suggests it's a "completely standard Kalashnikov rifle, with a standard banana-shaped magazine that extends conspicuously from the bottom of the airframe."

And then there is the question of how long the drone could sustain itself mid-flight or what kind of magazine it could hold. Business Insider points out that "each drone gun likely wouldn't hold more than 30 rounds."

In February, Kalashnikov unveiled a small drone that’s meant to destroy remote ground targets from a distance of up to 40 miles (64 km) away — by blowing itself up like a suicide bomber.

Perhaps Almaz-Antey's odd patent is simply to get a foot in the door of what might eventually — given enough time — turn into a tactical advantage in the battle field. But it seems unlikely it will look anything like this.