These bees can collect data for 7 hours at a time. 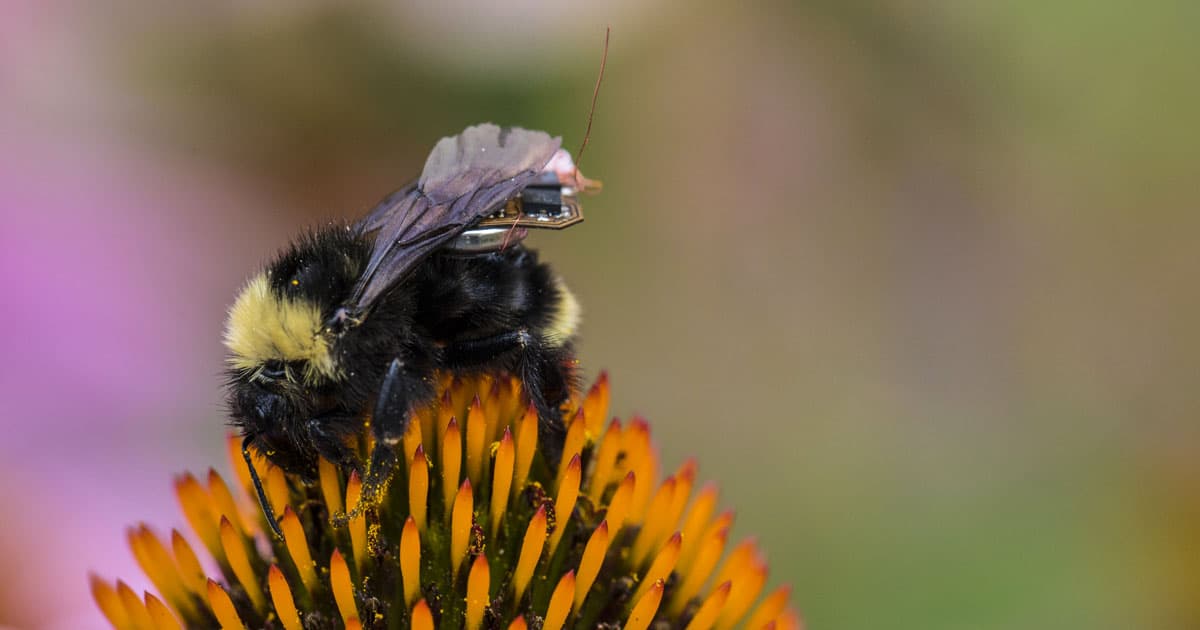 Image by Mark Stone/University of Washington

Look out, drones. Bionic bees are coming for your jobs.

Farmers across the globe are using drones to do everything from plant crops to monitor for pests. But drones are energy-intensive — according to University of Washington (UW) researcher Shyam Gollakota, most can only fly for about 20 minutes before they need to recharge.

Gollakota and colleagues at UW think they've come up with a better alternative. They've created what they believe is the first sensor package that affixes to the back of a bumblebee — and it can collect data for upwards of seven hours.

Bumblebees typically weigh between 150 and 200 milligrams and can carry payloads equivalent to their own body weight and sometimes even heavier.

According to the UW team's study, which it published online on Tuesday, each of its sensor packages weighs 102 milligrams. More than two-thirds of that weight is from the system's battery, which recharges wirelessly when the bionic bees return to the hive each night.

The rest is from a custom-designed localization system that records the bee's position, along with several tiny sensors that monitor the temperature, humidity, and light intensity around the bee. These sensors can collect up to 30 kilobytes of data, which the system uploads to a nearby access point after the bee returns to its hive at night.

As for how the researchers went about attaching their tiny electronic backpacks to the bees, that part of the process was actually pretty simple: They placed the insects in a freezer for 4 to 5 minutes. Once removed from the freezer, the bees were sluggish, giving the researchers enough time to fit each with a sensor package.

"[W]e followed the best methods for care and handling of these creatures," researcher Vikram Iyer noted in a press release.

Hopefully, that means the little worker bees won't plan on striking if they do find themselves employed by farmers in the near future.

More on farm drones: The Farming of the Future: Agriculture Drones Take to the Skies

Read This Next
FROM THE DEPT. OF THINGS TO BUY
The Best Science Gifts of 2023
Drone Tanker News
The US Navy Just Used a Drone to Refuel a Fighter Jet in Midair
Killer Copter
Middle Eastern Nation First to Buy Drone Armed With Machine Gun
Typical Day In Russia
Watch Russia's New Shotgun-Wielding Drone in Action
Keep Up
Wireless Charging Tech Lets Drones Stay Aloft Indefinitely
More on Robots & Machines
Blow Up Doll
Monday on the byte
Ukraine Accuses Russia of Using Inflatable "Dummy Tanks," Which Deflated
From the Dept. of...
Monday on futurism
The Best UPS Battery Backups of 2023
FROM THE DEPT. OF...
Jan 29 on futurism
The Best Netgear Routers of 2023
READ MORE STORIES ABOUT / Robots & Machines
Keep up.
Subscribe to our daily newsletter to keep in touch with the subjects shaping our future.
+Social+Newsletter
TopicsAbout UsContact Us
Copyright ©, Camden Media Inc All Rights Reserved. See our User Agreement, Privacy Policy and Data Use Policy. The material on this site may not be reproduced, distributed, transmitted, cached or otherwise used, except with prior written permission of Futurism. Articles may contain affiliate links which enable us to share in the revenue of any purchases made.
Fonts by Typekit and Monotype.