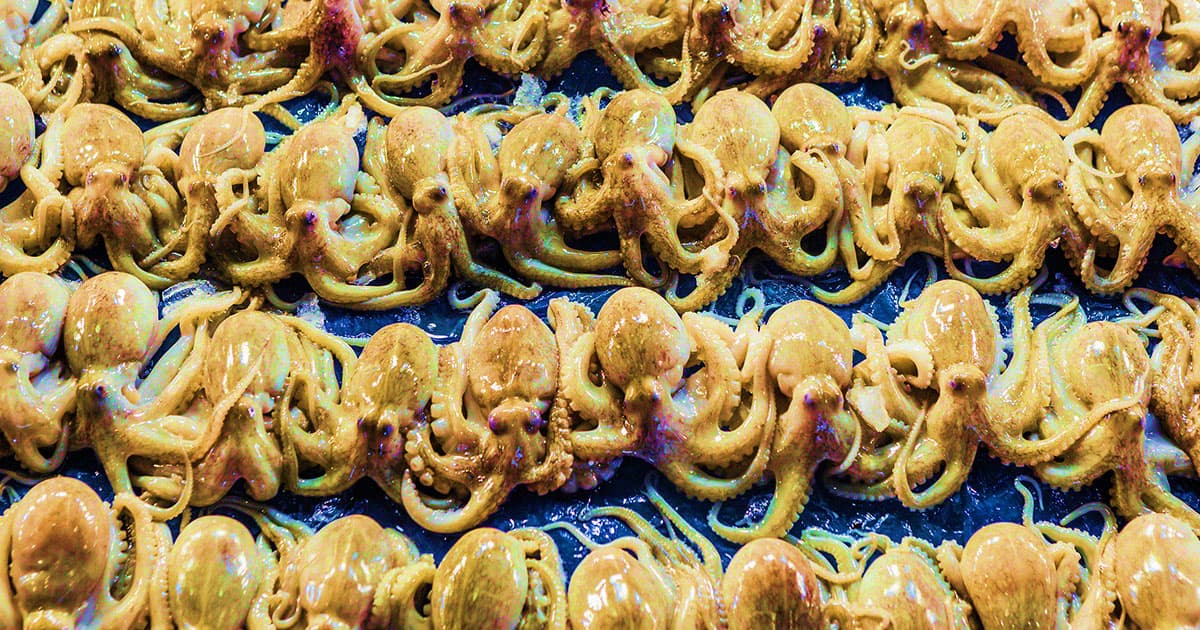 A Spanish company is pouring tens of millions of dollars into becoming the world's first commercial octopus farm, in spite of mounting evidence that the creatures can feel pain and pleasure, nevermind the environmental impacts of cephalopod farming.

Octopi have been getting unprecedented attention in recent years. From the 2014 video of an octopus walking on land to the endless stream of footage showing octopi adorably (and sometimes ferociously) fighting with other aquatic animals and humans alike, these feisty creatures are beloved online and off, as evidenced by Netflix's stunning, uber-popular documentary "My Octopus Teacher."

Yet in spite of the overwhelming public and scientific acknowledgement of their intelligence, which in 2021 led the UK to legally declare them sentient, octopi fishing has boomed, with some analysts declaring it the fastest-growing food production sector globally. Naturally, overfishing octopi has become a major concern — hence the desire for octopus farms.

Octopus fishing and potential farming, critics say, is fraught for a number of reasons. Reuters notes that previous captive octopi-breeding efforts have blown up because — get this — the cephalopods exhibit cannibalism, self-mutilation, and aggression towards each other.

While Nueva Pescanova director David Chavarrias stressed to Reuters that the company hasn't yet observed "cannibalistic" behavior in its octopi, the company hasn't provided many details on the creatures' conditions at its facilities.

To foster a quality of life high enough to keep such intelligent animals comfortable would cost much more than would be profitable, according to the World Wildlife Foundation's Raul Garcia, who directs the organization's fishing conservation efforts in Spain.

"Octopuses are extremely intelligent and extremely curious," Garcia told Reuters. "And it's well known they are not happy in conditions of captivity."

Eduardo Almansa, a scientist whose employer, Spain's Oceanography Institute, developed Nueva Pescanova's farming technology, told the news wire that "if we want to continue consuming octopus we have to look for an alternative... because the fisheries have already reached their limit."

Environmental researchers, though, have warned that farming octopi harms the environment just as much as fishing for them would.

"Octopus farming would increase, not alleviate, pressure on wild aquatic animals," Jennifer Jacquet, a professor of environmental studies at New York University, wrote in a 2019 analysis where she and fellow researchers came out against the proposed practice. "Given the depleted state of global fisheries and the challenges of providing adequate nutrition to a growing human population, increased farming of carnivorous species such as octopus will act counter to the goal of improving global food security."

This rock-and-a-hard-place scenario, as many activists point out, is good cause to simply stop buying and eating octopus. But short a global vibe shift away from eating these intelligent cephalopods or the EU deciding not to let octopi farming go ahead, it's hard to imagine this won't be an ethical flashpoint for years to come.

More octopi: Scientists: Octopuses Love to Fling Objects at Each Other

Read This Next
Big Fellas
George Church Has Raised $15M to Bring an Elephant-Mammoth Hybrid to Life. Could It Actually Work?
It's Baaack!
Scientists Thought This Creature Was Extinct For 30 Years. Then It Returned.
Futurism
AI That Counts And Identifies Wildlife Could Be A Game-changer For Ecologists
Futurism
As It Turns Out, Environmentally 'Protected' Lands Really Aren't
Futurism
Sexy Species Died Off Quicker. That Has Conservationists Worried.
More on Earth & Energy
Save Yourselves
Yesterday on the byte
Furious Marsupial So Thirsty For Sex That It’s Dying, Scientists Warn
Stem Ware
Feb 3 on the byte
Scientists Discover World's Oldest Preserved Vertebrate Brain
From Bad to Worse
Feb 2 on the byte
Global Warming Is Worse Than We Thought, AI Tells Scientists
READ MORE STORIES ABOUT / Earth & Energy
Keep up.
Subscribe to our daily newsletter to keep in touch with the subjects shaping our future.
+Social+Newsletter
TopicsAbout UsContact Us
Copyright ©, Camden Media Inc All Rights Reserved. See our User Agreement, Privacy Policy and Data Use Policy. The material on this site may not be reproduced, distributed, transmitted, cached or otherwise used, except with prior written permission of Futurism. Articles may contain affiliate links which enable us to share in the revenue of any purchases made.
Fonts by Typekit and Monotype.