Scientists Thought This Creature Was Extinct For 30 Years. Then It Returned.

"For so long, this species has seemingly only existed as part of our imagination." 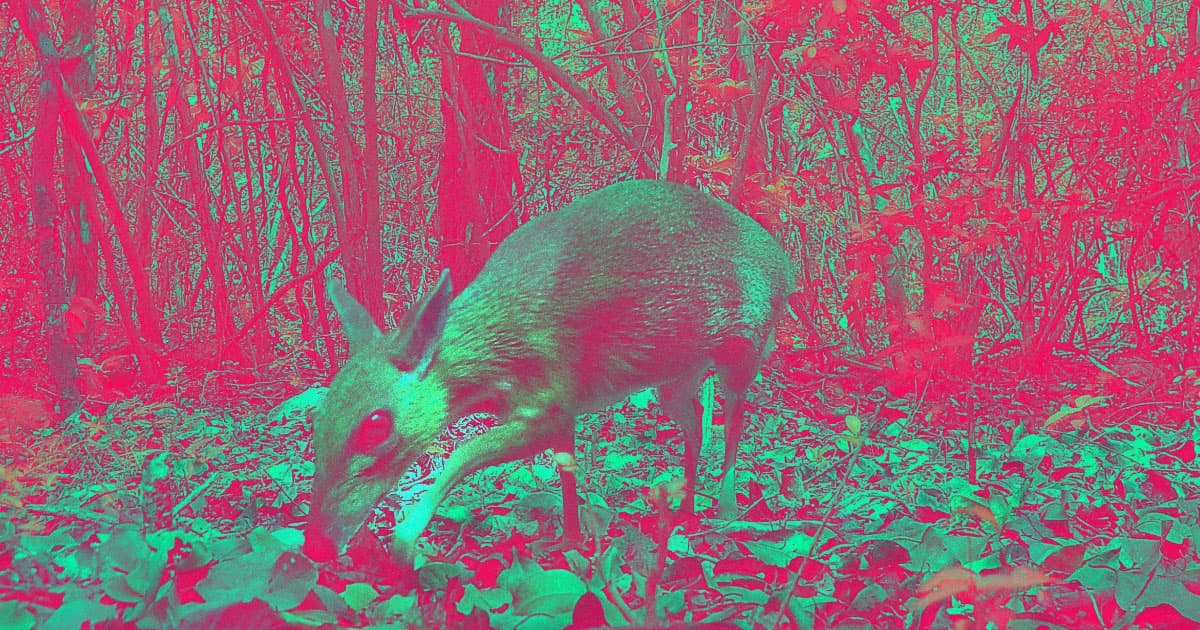 Wildlife conservationists are celebrating this week as the silver-backed chevrotain — a diminutive deer-like species thought to be extinct for 30 years — has been spotted in Vietnam.

"There was a question mark hanging over its current status," Andrew Tilker, Asian species officer at Global Wildlife Conservation, told New Scientist. "Erasing that question mark was a huge deal for us."

On Monday, Tilker and his colleagues published a paper in the journal Nature Ecology and Evolution detailing their use of camera traps to snap photos of the elusive silver-backed chevrotain, also know as the Vietnam mouse-deer.

Each trap was equipped with motion and heat sensors that triggered it to photograph anything that passed nearby — and on more than 200 occasions, the traps snapped photos of silver-backed chevrotains in the forest near Nha Trang.

Not only were the images the first confirmed detections of the species since 1990, but they were also the first-ever images of the animal in the wild.

The silver-backed chevrotain is — in the most scientific of terms — adorable. Seriously, it looks like what would happen if a deer and a kangaroo had a baby and it never grew bigger than a rabbit.

But that's not why the species' detection is so important.

The loss of a single species can have a domino effect on an ecosystem, causing other species to follow suit. Additionally, Earth's biodiversity — that is, the variety of species on the planet — is linked to everything from our air quality to our healthcare.

"Without biodiversity, there is no future for humanity," Oxford University zoologist David Macdonald told The Guardian in 2018 — and now that we know that we haven't lost the silver-backed chevrotain, we can work to ensure its continued contribution to our planetary ecosystem.

"For so long, this species has seemingly only existed as part of our imagination," An Nguyen, an associate conservation scientist for Global Wildlife Conservation, said in a press release. "Discovering that it is, indeed, still out there, is the first step in ensuring we don't lose it again, and we're moving quickly now to figure out how best to protect it."

More on extinction: Losing Biodiversity Could Lead to "Extinction Cascades"

Read This Next
My Octopus Teacher
Critics Horrified by World's First Octopus Farm
Big Fellas
George Church Has Raised $15M to Bring an Elephant-Mammoth Hybrid to Life. Could It Actually Work?
Futurism
AI That Counts And Identifies Wildlife Could Be A Game-changer For Ecologists
Futurism
As It Turns Out, Environmentally 'Protected' Lands Really Aren't
Futurism
Sexy Species Died Off Quicker. That Has Conservationists Worried.
More on Earth & Energy
Rock Battery
Yesterday on the byte
Researchers Successfully Turn Abandoned Oil Well Into Giant Geothermal Battery
Do The Worm
Friday on the byte
Scientists Name "Funky Worm" Amphibian After a Weird 70s Funk Song
Cow Chow
Thursday on the byte
Bill Gates Gives $12 Million to Flatulent Australian Cows
READ MORE STORIES ABOUT / Earth & Energy
Keep up.
Subscribe to our daily newsletter to keep in touch with the subjects shaping our future.
+Social+Newsletter
TopicsAbout UsContact Us
Copyright ©, Camden Media Inc All Rights Reserved. See our User Agreement, Privacy Policy and Data Use Policy. The material on this site may not be reproduced, distributed, transmitted, cached or otherwise used, except with prior written permission of Futurism. Articles may contain affiliate links which enable us to share in the revenue of any purchases made.
Fonts by Typekit and Monotype.