George Church Has Raised $15M to Bring an Elephant-Mammoth Hybrid to Life. Could It Actually Work? 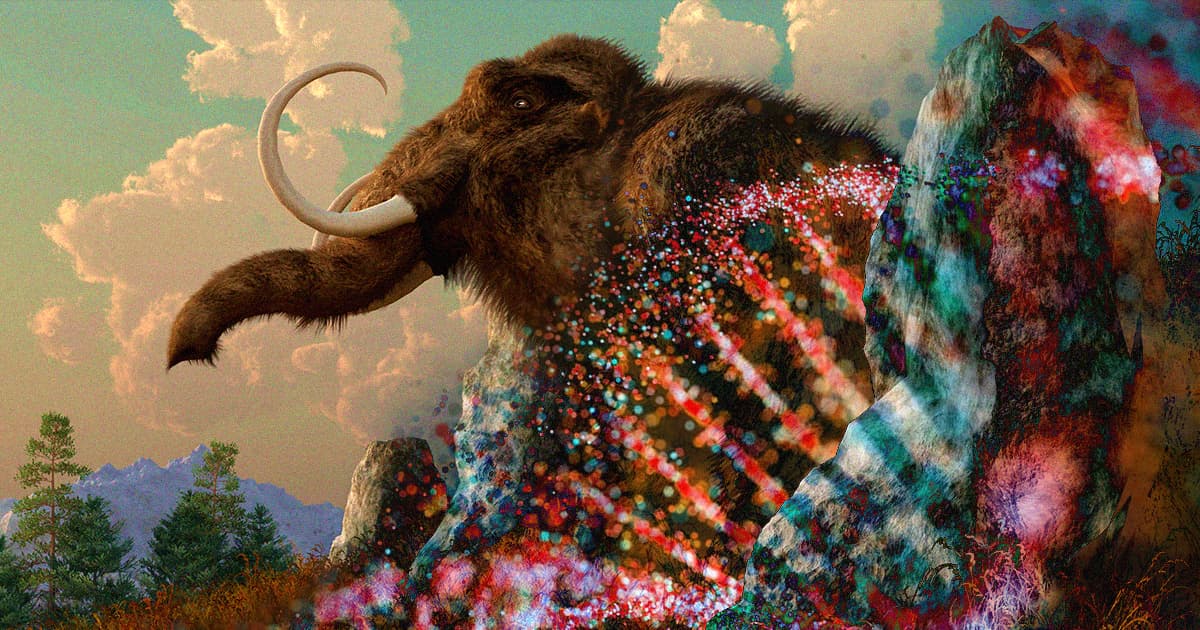 A biotech startup helmed by provocative Harvard geneticist George Church has secured $15 million in funding to bring back woolly mammoths — or at least something genetically similar — to the Arctic tundra where they first went extinct roughly 10,000 years ago.

“Technologies discovered in pursuit of this grand vision — a living, walking proxy of a woolly mammoth — could create very significant opportunities in conservation and beyond, not least of which include inspiring public interest in STEM, prompting timely discussions in bioethics, and raising awareness of the vital importance of biodiversity,” Church said in a press blurb.

The venture, aptly named Colossal, isn’t trying to build a “Jurassic Park”-style zoo. Instead, it’s positioning itself around conservation and climate change, developing tech that it says could help protect the environment and prevent the extinction of today’s endangered species.

Whether the company has a realistic shot at those immensely ambitious goals remains hazy (and in full disclosure, the author of this piece works as a contractor for Seed Health, which is a company associated with Church, and Matt Sechrest, the managing partner of Futurism’s parent company North Equity, is an investor in Colossal, though neither Seed nor Sechrest was involved in the assigning, writing, or editing of this story.)

With all that said, though, convincing the world of the science behind Colossal might be an uphill battle.

For one thing, the creatures that Colossal is aiming to create wouldn’t really be woolly mammoths, strictly speaking. The idea is to edit dozens of existing genes to restore mammoth-like traits in the Asian elephant — which already shares approximately 99.6 percent of the mammoth’s genome — to give it small ears, cold tolerance, thick layers of fat around the body, as well as the mammoth’s signature shaggy coat. That could be an interesting animal, but it would be an elephant-mammoth hybrid, not the real deal.

And that’s assuming they even get that far. The reality is that to succeed, the project will need to overcome some staggering technical and logistical hurdles.

One key detail, for instance, is how the creatures would actually be gestated. In 2017, when Church had previously floated the idea of a mammoth resuscitation project, he acknowledged the criticism that it would be unethical to bring the embryos to term in actual Asian elephants, since those animals are themselves endangered.

Instead, he said, the plan was to grow them in “artificial wombs.” The only problem? That tech didn’t — and still doesn’t — exist in any mature form.

The flip side, of course, is that if Colossal does succeed in creating a functional artificial womb, it would be a watershed moment for synthetic biology — and maybe even the entire Earth’s ecosystem. Church’s cofounder at Colossal, software entrepreneur Ben Lamm, said in an interview with Futurism that he hopes the tech could prevent the extinction of endangered mammals like elephants and rhinoceroses, or even let conservationists tinker with the genetic code of existing creatures to help them survive a changing climate.

“We can leverage these genetic tools,” he said, to “allow for species to not be just isolated to one geographic location, but be adaptable to others.”

Another significant issue would be the beasts’ microbiome, which scientists are only starting to understand even in living creatures. Raising hybrids in a controlled setting might not introduce the necessary microbes required for the proper brain and immune development of the animals.

Even though researchers have found well-preserved mammoth calves in permafrost, Colossal’s science team conceded in response to questions that “it’s hard to differentiate between bacteria that colonize the gut while the organism is alive, and the bacteria that have colonized and contaminated the mammoths postmortem in the thousands of years since their death.”

“Colossal is conscious of the important role a healthy microbiome plays in the development of the woolly mammoth,” the company told us, adding that “Colossal’s teams are prepared to equip our woolly mammoth with an appropriate microbiome by means of an artificial birth canal or tailored probiotics.”

And even if Colossal can overcome those technical obstacles, the plan also faces substantial opposition from the scientific community — or, for that matter, anybody who took the “Jurassic Park” franchise to heart.

“The proposed ‘de-extinction’ of mammoths raises a massive ethical issue — the mammoth was not simply a set of genes, it was a social animal, as is the modern Asian elephant,” University of Manchester zoologist Matthew Cobb told The Guardian in 2017 in response to an earlier iteration of Church’s plan. “What will happen when the elephant-mammoth hybrid is born? How will it be greeted by elephants?”

Like other mammals, elephants learn complex social behaviors from other members of their herd. Raising the first elephant-mammoth hybrids may require extensive hands-on socialization. Because Asian elephants are already endangered, the endeavor would be even more challenging.

And if the creatures ever make it out of the lab, there may also be a plethora of unexpected problems caused by turning back time in the Arctic. Any elephant-mammoth hybrids that Colossal produces won’t be the same animal that once roamed the tundra thousands of years ago, and the ecology of the area will have evolved as well.

An academic paper published last year in the Journal for Nature Conversation highlighted the risks of such de-extinction endeavors.

“Any proxy will be placed in an ecosystem that has either never encountered the extinct species or has not done so for a long time,” its authors wrote.

Further, de-extinction could further introduce unintended consequences for the existing ecological interactions in the area, or introduce new types of diseases to the ecosystem. The hybrid mammoths could disrupt whatever delicate balance remains in the Arctic, in other words, leaving scientists to ask whether it’s a risk worth taking at all.

As precedent, Lamm brought up the reintroduction of wolves to Yellowstone Park a few decades ago, which led to a cascade effect that gradually rebalanced the ecosystem. But unlike introducing an elephant-mammoth hybrid into the Arctic, wolves were thriving in that ecosystem as little as 150 years ago.

Lamm told Futurism that Church has a bioethicist as part of his lab and is working with numerous conservation groups including the Vertebrate Genome Project and the Pleistocene Park Foundation, in order to navigate those complex issues. Colossal is also working with several scientists who have reintroduced flora and fauna in Siberia, the company said.

In a more philosophical defense, Lamm also compared Colossal to the Apollo program, pointing out that technologies including GPS and the “fundamentals of the Internet” emerged from that program precisely because it set an outsize goal for itself — and, ultimately, succeeded by landing American astronauts on the Moon.

To be fair, that is a compelling point. Colossal may end up developing important biotechnology tools for conservation even if it isn’t successful with its mammoth ambitions. And while Colossal will be patenting the technology and genomic sequences arising from the project, it hopes to make their findings transparent and available through peer-reviewed scientific publications.

It’s true that the venture has a medium-sized pile of cash, as well as an array of conservation groups, scientists, and bioethicists on its side, according to Lamm. But the technical challenges it will need to solve will be multivariate and unprecedented.

And even if it succeeds, there will likely be immense public and scientific opposition against it at every stage. For a preview, just look at the outcry when a biotech company released genetically modified mosquitoes in Florida.

At the same time, though, the technology to resurrect extinct creatures does hold the extraordinary promise, at least potentially, of reversing some of the terrible damage that humankind has done to the Earth’s environment. And, on another level, it’s inspiring that someone is at least trying, even if success is far from guaranteed.

But like a well-intentioned “Jurassic Park” sequel, it could also go off the rails very fast.

Read This Next
Rice For All
Scientists Gene Hack Rice to Need Way Less Fertilizer and Boost Yields
My Octopus Teacher
Critics Horrified by World's First Octopus Farm
It's Baaack!
Scientists Thought This Creature Was Extinct For 30 Years. Then It Returned.
Futurism
AI That Counts And Identifies Wildlife Could Be A Game-changer For Ecologists
Futurism
As It Turns Out, Environmentally 'Protected' Lands Really Aren't
More on Earth & Energy
Dishonorable Disc...
Yesterday on the byte
Scientists Alarmed by Video of Deep Sea Mining Company Spewing Waste Into Ocean
Save Yourselves
Feb 5 on the byte
Furious Marsupial So Thirsty For Sex That It’s Dying, Scientists Warn
Stem Ware
Feb 3 on the byte
Scientists Discover World's Oldest Preserved Vertebrate Brain
READ MORE STORIES ABOUT / Earth & Energy
Keep up.
Subscribe to our daily newsletter to keep in touch with the subjects shaping our future.
+Social+Newsletter
TopicsAbout UsContact Us
Copyright ©, Camden Media Inc All Rights Reserved. See our User Agreement, Privacy Policy and Data Use Policy. The material on this site may not be reproduced, distributed, transmitted, cached or otherwise used, except with prior written permission of Futurism. Articles may contain affiliate links which enable us to share in the revenue of any purchases made.
Fonts by Typekit and Monotype.