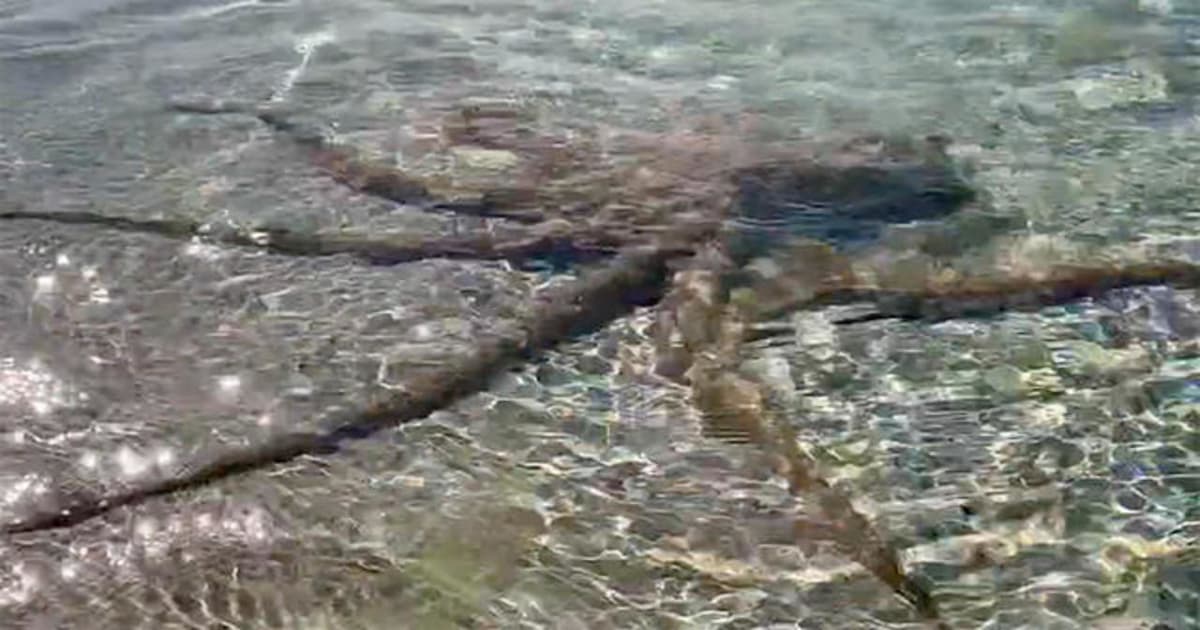 He described the creature as "the angriest octopus."

He described the creature as "the angriest octopus."

That was the case with an Australian man who was attacked by a giant octopus while on vacation with his family in March.

Lance Karlson, a 34-year-old geologist from Perth, was vacationing with his wife and daughter on a beach in Dunsborough, Australia on March 18 when he spotted a giant octopus in shallow waters, according to The New York Times. He decided to approach the creature with his 2-year-old daughter in one hand and a phone to record the encounter in the other.

Karlson and his daughter made it away unscathed from that particular interaction. However, when the geologist decided to do some snorkeling later, he was attacked by what he described as "the angriest octopus" to the NYT.

As he swam out into the ocean, he spotted a pile of crab shells stacked on the ocean floor — a common way for octopi to conceal their hiding spots. He told the NYT that an octopus then lashed out at him twice, striking him on his neck, back, and arms.

His injuries consisted of visible red marks on his neck, back, and arms. He also felt a stinging sensation where he was struck, and his wife later poured soda down his back to alleviate the pain.

"The stinging sensation went away almost instantly," Karlson said to the NYT.

Judit Pungor, an octopus researcher at the University of Oregon, told the NYT that octopus don’t have venom in their tentacles that would be "alleviated by pouring something acidic over it." She believes that Karlson might have been coincidentally attacked by a jellyfish.

But it wouldn’t be too surprising if he was attacked by an octopus. After all, they’ve been known to punch fish out of spite.

After posting the video to his Instagram, it quickly went viral. Now, Karlson fears that people will get the wrong idea about octopuses saying that folks should "give some love to these beautiful creatures and not treat them with disdain."

Peter Ulric Tse, a professor of cognitive neuroscience at Dartmouth College who has studied octopus behavior, believes that the creature in the viral video wasn’t trying to harm Karlson.

"My guess is that the octopus here is sending a warning meaning ‘back off,’" he told the NYT. "Octopuses will lunge or shoot an arm out when they feel a fish, another octopus or a human is in their space. I think this is often pre-emptive aggression, meant to signal ‘don’t mess with me,’ rather than aggression seriously meant to harm the ‘invader.’"

So instead of having a Jaws-esque backlash against our favorite eight-tentacled vertebrate, we should appreciate them from afar — and maybe avoid bothering them for the ‘gram.

READ MORE: ‘The Angriest Octopus’ Lashes at a Tourist on an Australian Beach [NYT]

Sealab 2019
Air-Filled Tent Lets Scuba Divers Camp Out Underwater
1. 31. 19
Read More
Never-Before-Seen Viruses With Weird DNA Were Just Discovered in The Ocean
1. 27. 18
Read More
Scientists Have Created Programmable Synthetic Skin
10. 12. 17
Read More
+Social+Newsletter
TopicsAbout UsContact Us
Copyright ©, Camden Media Inc All Rights Reserved. See our User Agreement, Privacy Policy and Data Use Policy. The material on this site may not be reproduced, distributed, transmitted, cached or otherwise used, except with prior written permission of Futurism. Articles may contain affiliate links which enable us to share in the revenue of any purchases made.
Fonts by Typekit and Monotype.