China Isn't Taking Our Recycling. Here's What We Could Do With It Instead.

The staggering amount of paper and plastic we shipped to China in the past will have to find a new home. 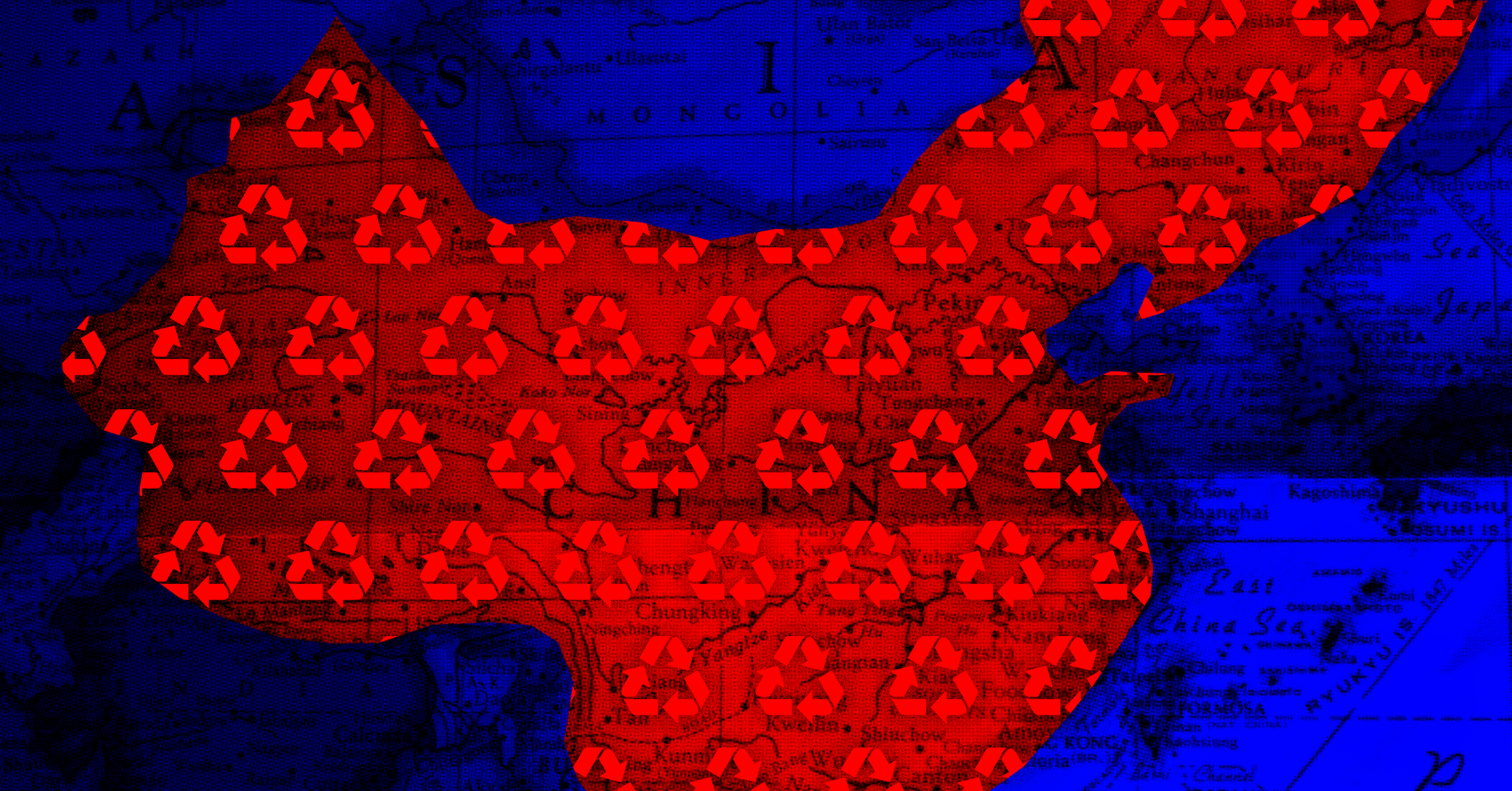 Last year, China announced that it is officially done accepting "foreign garbage." That is: plastic and paper recycling scraps from the U.S. and Europe. Since March 1, the country has barred 24 materials, including plastic and paper, from entering its borders. The few items the nation will take, like scrap metal, have to be super clean (to be precise, no more than .5 percent impure).

That's a big deal to the U.S., which, in 2016, sent 16 million tons of waste to China. Under these new rules, most of that won't be accepted. So what will we do with all those shredded bottles and newspapers?

Some states have already started chucking recyclables into landfills, but there are other options.

One: we could stockpile the scraps until we have enough processing facilities in the U.S. to handle them. Since we've been dependent on China's open arms for so long, we haven't invested in mills big enough to process all those paper scraps in the U.S., Ben Harvey, the president of waste management company E. L. Harvey and Sons, told USA Today. It will take five to six years to build plants that can handle everything that had previously been outsourced. In the meantime, we have to be careful about where we put scrap stacks. California's recycling policy director, Zoe Heller, told the New York Times that paper stashed in the wrong spot could be tinder for wildfires.

If we don't want to sit on our own waste, recycling companies could reroute their ships that haul the recyclables to other nations. Last year, Thailand, Vietnam, Malaysia, and Taiwan increased the amount of plastic scrap they accept, while India and Mexico welcomed more cardboard and paper scraps. Even so, China took half of the world's plastic, paper, and metals in 2016. If other nations are going to compensate for all that China rejects, they'll have to take in a whole lot more waste.

The last and most effective way to deal with the crushing stockpile of bottles, caps and cans? Stop using so many in the first place. Legal measures, like California's ban on single-use plastic bags, reduce the amount of plastic that can be discarded. In 2016, the state banned single-use plastic bags (it used to hand out 13 billion plastic bags a year), and that's had a direct, noticeable impact on how much is wasted: the 2017 Coastal Cleanup Day picked up less than half as many bags than their 2010 effort did, according to the LA Times. It's not yet clear whether measures like this will take off elsewhere — New York City only recently revived the idea of a ban like California's, and who knows what will happen with the bill meant to ban plastic straws in all five boroughs.

No matter how we solve the problem, it has to be taken care of soon — preferably not by begging China to reverse the policy and let their environment go to ruin.

Read This Next
Reduce, Reuse, Landfill
A Shocking Amount of US "Recycling" Goes Straight to the Landfill
Fusion Force
China Announces Plan for Hybrid Fission-Fusion Power Facility
Dam Straight
China Says It's 3D Printing a 590-Foot Hydroelectric Dam With Zero Human Labor
Climate Change Chats
How to Talk to Your Family About Climate Change
Fusion Update
Chinese Scientists Say They've Discovered Cheap New Way to Do Nuclear Fusion
More on Earth & Energy
Fly Guy
Yesterday on the byte
Bird Advocates Horrified by Pigeon Dyed Pink For Gender Reveal Party
The Dos and Do-Do...
Yesterday on the byte
Startup Backed By "Jurassic World" Producer Says It Will Revive Extinct Dodo Using Complete Genome
Shark Smile
Tuesday on the byte
Influencer Fined for Eating Endangered Great White Shark
READ MORE STORIES ABOUT / Earth & Energy
Keep up.
Subscribe to our daily newsletter to keep in touch with the subjects shaping our future.
+Social+Newsletter
TopicsAbout UsContact Us
Copyright ©, Camden Media Inc All Rights Reserved. See our User Agreement, Privacy Policy and Data Use Policy. The material on this site may not be reproduced, distributed, transmitted, cached or otherwise used, except with prior written permission of Futurism. Articles may contain affiliate links which enable us to share in the revenue of any purchases made.
Fonts by Typekit and Monotype.