Black Holes to Merge in 100,000 Years, in an Explosion to Rival 100 Million Supernovae 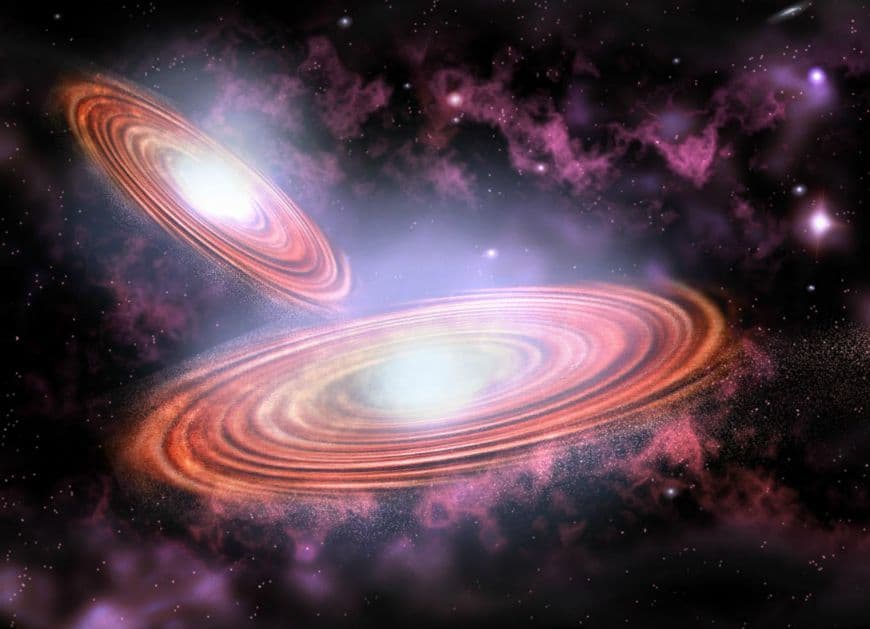 Earlier this year, astronomers discovered what appeared to be a pair of supermassive black holes circling toward a collision so powerful it would send a burst of gravitational waves surging through the fabric of spacetime itself.

Now, in a study in the journal Nature, astronomers at Columbia University provide additional evidence that a pair of closely orbiting black holes is causing the rhythmic flashes of light coming from quasar PG 1302-102.

Based on calculations of the pair's mass—together, and relative to each other—the researchers go on to predict a smashup 100,000 years from now, an impossibly long time to humans but the blink of an eye to a star or black hole. Spiraling together 3.5 billion light-years away, deep in the Virgo constellation, the pair is separated by a mere light-week. By contrast, the closest previously confirmed black hole pair is separated by 20 light-years.

"This is the closest we've come to observing two black holes on their way to a massive collision," said the study's senior author, Zoltan Haiman, an astronomer at Columbia. "Watching this process reach its culmination can tell us whether black holes and galaxies grow at the same rate, and ultimately test a fundamental property of space-time: its ability to carry vibrations called gravitational waves, produced in the last, most violent, stage of the merger."

At the center of most giant galaxies, including our own Milky Way, lies a supermassive black hole so dense that not even light can escape. Over time, black holes grow bigger—millions to billions of times more massive than the Sun—by gobbling up stars, galaxies and even other black holes.

A supermassive black hole about to cannibalize its own can be detected by the mysterious flickering of a quasar—the beacon of light produced by black holes as they burn through gas and dust swirling around them. Normally, quasars brighten and dim randomly, but when two black holes are on the verge of uniting, the quasar appears to flicker at regular intervals, like a light bulb on a timer.

Recently, a team led by Matthew Graham, a computational astronomer at the California Institute of Technology, designed an algorithm to pick out repeating light signals from 247,000 quasars monitored by telescopes in Arizona and Australia. Of the 20 pairs of black hole candidates discovered, they focused on the most compelling bright quasar—PG 1302-102. In a January study in Nature, they showed that PG 1302-102 appeared to brighten by 14% every five years, indicating the pair was less than a tenth of a light-year apart.

Intrigued, Haiman and his colleagues wondered if they could build a theoretical model to explain the repeating signal. If the black holes were as close as predicted, one had to be circling a much larger counterpart at nearly a tenth of the speed of light, they hypothesized. At that speed, the smaller black hole would appear to brighten as it approached Earth's line of sight under the relativistic Doppler beaming effect.

If correct, they predicted they would find a five-year cycle in the quasar's ultraviolet emissions—only two-and-a-half times more variable in its intensity. Analyzing UV observations collected by NASA's Hubble and GALEX space telescopes they found exactly that.

Previous explanations for the repeating signal include a warp in the debris disks orbiting the black holes, a wobble in the axis of one black hole and a lopsided debris disk formed as one black hole draws material off the other—all creating the impression of a periodic flicker from Earth.

"We can start to put numbers on the rates that black holes come together and build up into larger black holes, and use what we're learning to search for more black hole pairs," said study coauthor David Schiminovich, an astronomer at Columbia.

An uptick in the number of black hole binary discoveries has made astronomers hopeful that a collision could be detected in the next decade. This summer, Graham and his colleagues reported another 90 candidates, while astronomers at Columbia expect to soon unveil discoveries of their own from data collected at California's Palomar Observatory.

"The detection of gravitational waves lets us probe the secrets of gravity and test Einstein's theory in the most extreme environment in our universe—black holes," said the study's lead author, Daniel D'Orazio, a graduate student at Columbia. "Getting there is a holy grail of our field."

Read This Next
Warped Perspective
Scientists Propose Method for Detecting Alien Warp Drive Activity
Kilonova Blast
Staggering Galactic Explosion Blamed on Black Hole Collision
Sun Screen
The James Webb Space Telescope Is Officially Unfurling Its Mighty Sunshield
Mad Libs
A Philosopher Is Trying to Figure out What Black Holes Really Are
The Great Evil
A Jupiter-Sized Black Hole is Floating Around The Milky Way
More on Off World
Killernova
6:10 PM on the byte
Scientists Find "One in Ten Billion" Star System Primed to Explode in Titanic Kilonova
Lonely Planet
Yesterday on futurism
Scientists Find Nearby Planet the Same Size of Earth, Plan to Search It for Life
Take Cover
Feb 4 on the byte
Space Startup Blows Up Another Giant Inflatable Space Station Module
READ MORE STORIES ABOUT / Off World
Keep up.
Subscribe to our daily newsletter to keep in touch with the subjects shaping our future.
+Social+Newsletter
TopicsAbout UsContact Us
Copyright ©, Camden Media Inc All Rights Reserved. See our User Agreement, Privacy Policy and Data Use Policy. The material on this site may not be reproduced, distributed, transmitted, cached or otherwise used, except with prior written permission of Futurism. Articles may contain affiliate links which enable us to share in the revenue of any purchases made.
Fonts by Typekit and Monotype.