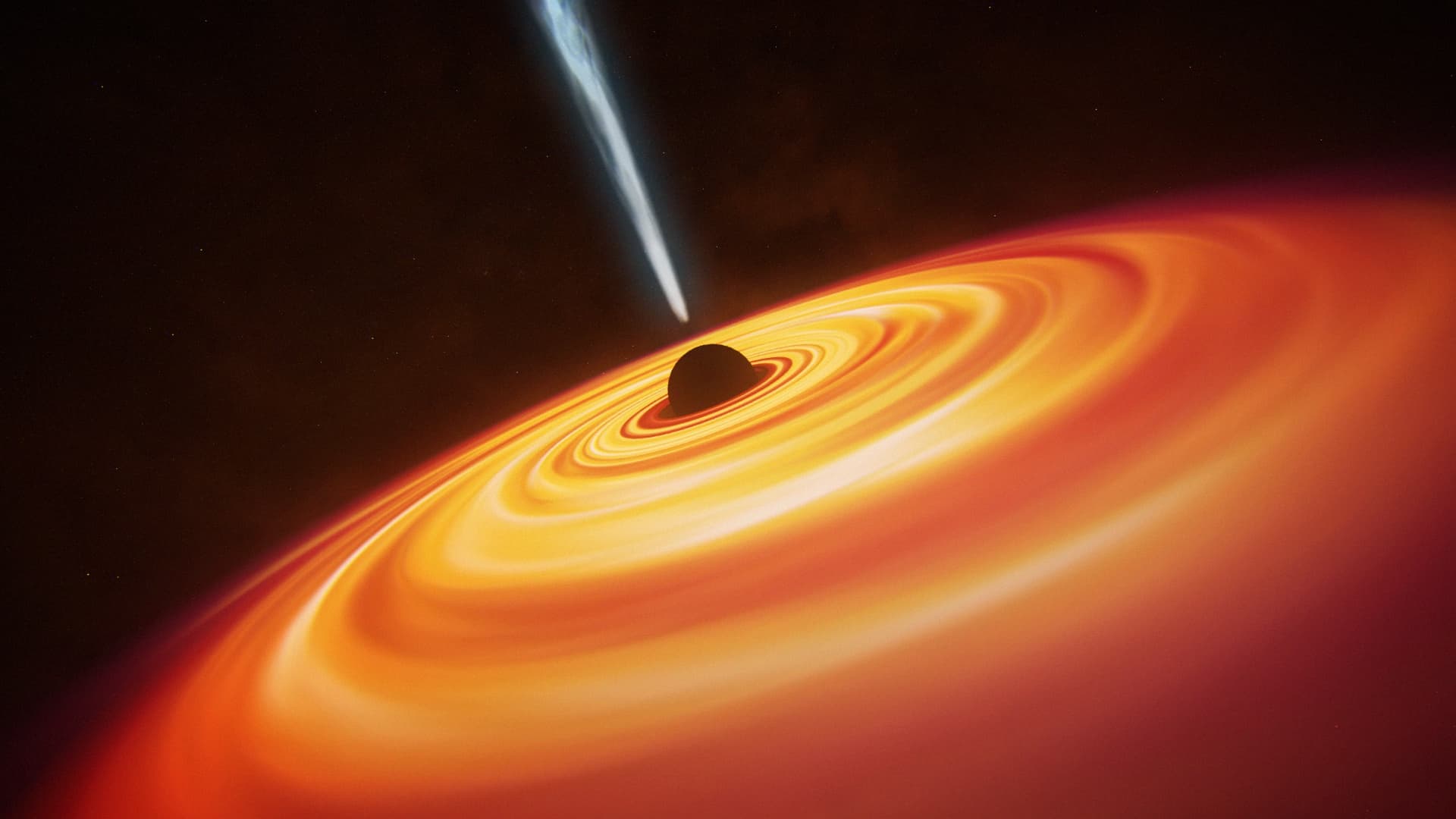 In the 2014 film Interstellar, Matthew McConaughey and friends were shown exploring a series of planets orbiting a supermassive (but relatively benign) black hole in a distant galaxy.  The black hole, called “Gargantua,” was supposed to have an event horizon—that is, a point of no return—about as large as the Earth’s orbit; nevertheless, Gargantua was depicted as fairly quiescent and neighborly.

But the reality of these colossal cosmic nightmares, as a recent image from NASA’s Chandra X-ray Observatory shows, is something very different.

The newly released picture shows the terrifying power of an actual supermassive black hole located in the galaxy Pictor A, some 500 million light years distant.  This black hole is about 40 million times the mass of the Sun (that’s about 10 times larger than the black hole at the center of our own galaxy), and if it were to replace the Sun within our Solar System, its event horizon would swallow the orbits of both Mercury and Venus.

Unlike Gargantua, however, the Pictor A black hole is an energetic and ferocious beast, lashing out at the universe with all the considerable power at its disposal.  The new image shows how the material being consumed by the black hole—stars, planets, interstellar gas, unwary astronauts (kidding)—releases a tremendous surplus of energy as it swirls around the event horizon in a massive accretion disk.

All of this unbridled energy is channeled into two immense jets of particles that pierce the intergalactic medium at nearly the speed of light.  In fact, these particle beams are so powerful that the observed jet—which is pointed roughly in the direction of the Earth—maintains its integrity for a distance of nearly 300,000 light years.

That’s over three times the length of our own Milky Way galaxy!

Which just serves to underscore the unfathomable energies involved.  The new image—which was compiled over 15 years from Chandra data, and is combined with radio imagery from the Australia Telescope Compact Array—also betrays a fainter “counterjet.”  Because it is on the opposite side of the Pictor A galaxy, moving away from Earth, this counterjet is far less visible.

The radio data, which is red in the image (blue represents the Chandra data), also show two huge “radio lobes,” each many times larger than the Milky Way, caused by the jet interacting with intergalactic gas, and a blue X-ray “hotspot” on the far right, the result of shock waves produced by the jet.

The researchers who studied the new data were able to determine that the X-rays generated by the jets of the Pictor A supermassive black hole are most likely caused by what is called “synchrotron emission.”  In this mechanism, X-rays are emitted by electrons caught up and spiraling around in powerful magnetic fields.

The process is not well understood, but it is believed that supermassive black holes also possess enormous magnetic fields, along which subatomic particles are accelerated to fantastic speeds, producing the polar jets so often observed emanating from quasars, radio galaxies, and other forms of active galactic nuclei.

They were also able to rule out a competing theory: the notion that electrons flung at near light-speed from the central black hole collide with photons from the cosmic microwave background (CMB).  Theoretically, such a collision should boost the CMB photons into the X-ray part of the spectrum.  But the X-ray signatures did not match this scenario, effectively eliminating it from contention.

Whatever the case, it’s safe to assume there aren’t any inhabitable planets circling the supermassive black hole of Pictor A, and that even Matthew McConaughey would think twice before exploring the environment of this monster.

Read This Next
Black Hole's Sun
Scientists Just Released the First-Ever Image of a Black Hole
On The Event Horizon
Here's Why Everyone's so Excited About the Black Hole Image
Black Hole Sun
Here's the Best-Ever Image of the Black Hole Devouring Our Galaxy
Diving In
360-Degree Video Shows What It's Like to Fall Into a Black Hole
Futurism
Scientists Have Learned Why Neutron Stars Shine So Bright
More on Off World
Heavy Metal
Yesterday on the byte
NASA Mars Rover Finds Metallic Object That Smashed Down on Surface
Small But Mighty
Yesterday on the byte
Baby Asteroid Photobombs James Webb On Accident
Little Guy
Yesterday on the byte
Scientists Prototype "Creeping" Lizard-Like Robot for Exploring Mars
READ MORE STORIES ABOUT / Off World
Keep up.
Subscribe to our daily newsletter to keep in touch with the subjects shaping our future.
+Social+Newsletter
TopicsAbout UsContact Us
Copyright ©, Camden Media Inc All Rights Reserved. See our User Agreement, Privacy Policy and Data Use Policy. The material on this site may not be reproduced, distributed, transmitted, cached or otherwise used, except with prior written permission of Futurism. Articles may contain affiliate links which enable us to share in the revenue of any purchases made.
Fonts by Typekit and Monotype.