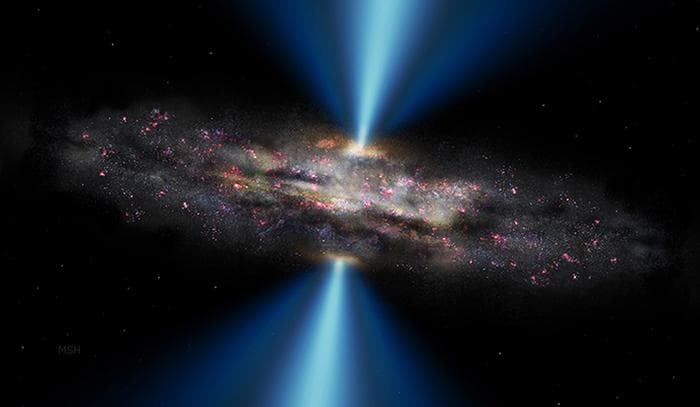 When we peer into the heart of galaxies in our local universe, we find that the vast majority harbor supermassive black holes in their centers—a trend that appears to hold steady regardless of where we look. In fact, astronomers estimate that nearly all large galaxies—ellipticals and spirals alike—have them, and they play an important role in galaxy evolution.

We are seeing the unlikely pair as they were approximately 11 billion years ago, when the universe was just 2 billion years old. Back then, things were much different. The expansion of the universe hadn't yet carried galaxies clear across billions of light-years of spacetime, and the intergalactic medium was very rich—filled with plenty of materials for black holes to feed on, and grow.

In order to make this discovery, astronomers utilized the COSMOS Legacy Survey and MOSFIRE—a new infrared spectrometer from Keck. The idea was to survey black hole growth across all walks of space and time, but they got more than they bargained for. One of the study's co-authors, C. Megan Urry (from Yale University), expands,

"Our survey was designed to observe the average objects, not the exotic ones," she continued, "This project specifically targeted moderate black holes that inhabit typical galaxies today. It was quite a shock to see such a ginormous black hole in such a deep field."

The researchers explain that, when coming up with an estimate for its mass, they were surprised to learn that "the measurements correspond to the mass of a typical galaxy." In other words, the black hole is disproportionate to its host galaxy. Rather, it's simply gargantuan in comparison.

WATCH: "6 of the Largest Objects in the Known Universe"

"Most galaxies, including our own Milky Way, have a black hole at their center, holding millions to billions of solar masses," Yale University notes in their press release." Not only does the new study challenge previous notions about the way host galaxies grow in relation to black holes, it also challenges earlier suggestions that the radiation emitted by expanding black holes curtails the creation of stars."

Despite the black hole's insatiable appetite for gas and dust—the very materials that accumulate, and eventually collapse to form new stars—CID-947 continues to churn out many new stars. There's no signs of it slowing down either.

Ultimately, the team posits that the phenomena driving CID-947's growth may be linked to certain starburst galaxies in our cosmic neighborhood—NGC 1277 included. This galaxy, which lurks 220 million light-years from Earth toward the Perseus constellation, is extreme in every sense of the word, especially where its central black hole is concerned. It is believed to weigh approximately 17 billion solar masses, which, if correct, would account for well over 14 percent of the entire galaxy's mass.