The closest black holes discovered by astronomers will collide after 100,000 years 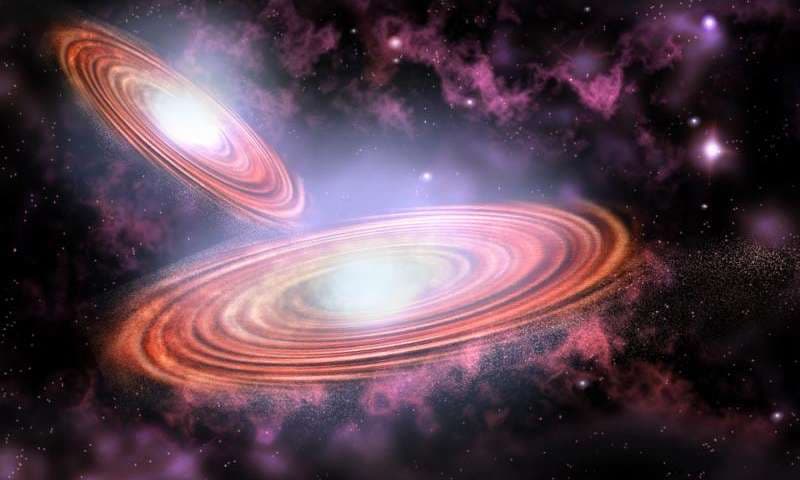 A discovery earlier this year by astronomers have revealed two massive black holes that have been circling towards each other
in a collision. This impact has been predicted then by those astronomers that it is going to be so powerful, it will be sending a burst of gravitational waves throughout the space-time's fabric itself. A recent study by the journal Nature states that Columbia University's astronomers have provided additional evidence that these two black holes, based on the calculations they have made on their masses, will collide with each other 100,00 years from now.

"This is the closest we've come to observing two black holes on their way to a massive collision," says Zoltan Haiman, one of the astronomers at Columbia University and the study's senior author. "Watching this process reach its culmination can tell us whether black holes and galaxies grow at the same rate, and ultimately test a fundamental property of space-time: its ability to carry vibrations called gravitational waves, produced in the last, most violent, stage of the merger."

Read This Next
Space Billboards
Russian Scientists Propose Plan to Launch Huge Advertisements Into Orbit Over Cities
Makeover Scene
Space Tourist Says He's Thinking About Flying SpaceX Craft Up to Fix Hubble
Grain of Salt
There's a Huge Problem With Elon Musk's Promise to Bring Starlink to Iran
Palliative Care
NASA's Mars Lander Refuses to Die Even Though It's Supposed To
Sluggo Mode
SpaceX Has a Major Problem With Its Starlink Internet Connections
More on Off World
Universally Cool
6:08 PM on the byte
Madman Builds "Entire Universe" in Minecraft
I'll Allow It
Yesterday on the byte
SpaceX Ground Control References "Mean Girls" During Astronaut Launch
Space Anna
Yesterday on the byte
SpaceX Launches Russian Cosmonaut to ISS Despite Nuclear War Threats
READ MORE STORIES ABOUT / Off World
Keep up.
Subscribe to our daily newsletter to keep in touch with the subjects shaping our future.
+Social+Newsletter
TopicsAbout UsContact Us
Copyright ©, Camden Media Inc All Rights Reserved. See our User Agreement, Privacy Policy and Data Use Policy. The material on this site may not be reproduced, distributed, transmitted, cached or otherwise used, except with prior written permission of Futurism. Articles may contain affiliate links which enable us to share in the revenue of any purchases made.
Fonts by Typekit and Monotype.