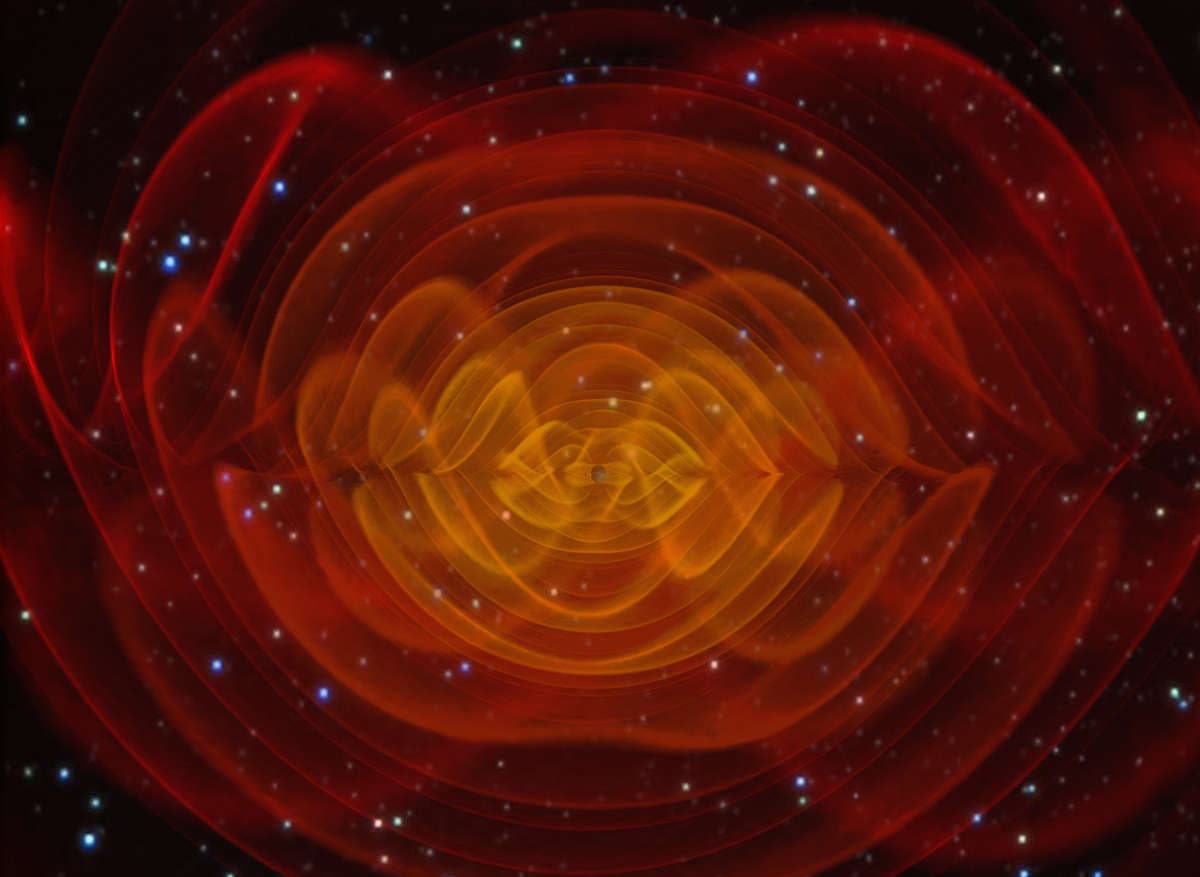 Remarkably, the waves were even powerful enough to break the Internet, bringing down both the LIGO and American Physical Society websites.

Until our servers are back online (we're adding more capacity now) here is figure one from the paper #LIGO pic.twitter.com/ZmolQ8lZLP

“A Window Onto the Universe”

“My reaction was ‘Wow, I couldn’t believe it!,” said David Reitze, Executive Director of the LIGO Laboratory. “I think we’re opening a window onto the universe, a window of gravitational wave astronomy.”

The detection was made on September 14, 2015. The ensuing months were spent in the arduous task of actually confirming a signal that was, at first, considered too good to be true.

But the researchers finally verified the findings.  “It was definitely not a blind injection,” said Gabriela González, spokeswoman for the LIGO Scientific Collaboration, referring to false signals occasionally injected into the data to ensure accurate detections.

The signals emanated from a point in the sky somewhere in the southern celestial hemisphere, in the rough direction of the Magellanic clouds. Ultimately, they were emitted roughly 1.3 billion years ago (which means the source was located about 1.3 billion light years away).

The waves resulted from the collision, and subsequent merger, of two black holes. These black holes were 29 and 36 solar masses respectively and about 150 kilometers in diameter. Notably, they collided at half the speed of light.

According to theoretical physicist Kip Thorne of Caltech, a co-founder of LIGO and pioneer in the field of gravitational wave detection, the colliding black holes “created a violent storm in the fabric of spacetime.”

This storm was very brief—lasting only 20 milliseconds—and unleashed an amount of energy equivalent to 50 times the total power output of all the stars in the universe. The two black holes merged to form a single, 62 solar mass black hole. 3 suns worth of gravitational energy was annihilated in the coalescence, releasing the gravitational waves that were detected last September.

The signals exactly matched predictions from Einstein’s General Theory of Relativity regarding what would happen when two black holes collide and merge. In fact, the nature of the event was made clear by running computer simulations and finding which ones produced a signal that coincided with the September 14 event.

“Einstein would be beaming, wouldn’t he?” enthused France Córdova, Director of the National Science Foundation.

The LIGO detectors are some of the most sophisticated, and some of the most sensitive, instruments in the world.  Both are located in the United States, with one in Hanford, Washington, and the other in Livingston, Louisiana.  A third detector, the VIRGO experiment in Cascina, Italy, is expected to become operational shortly. Once it is online, it will be possible to triangulate gravitational wave sources in the sky.

The interferometers operate by shining laser beams along two perpendicular “arms” that are each 4 kilometers (2.5 miles) long; gravitational waves are registered by minute discrepancies in the distance traveled by the laser light—discrepancies caused when the passing waves “stretch” spacetime.

The discrepancy detected in the September 14 event amounted to about 1,000th the size of an atomic nucleus.

What Does All This Mean?

The new discovery has enormous implications, many of which will require decades to be worked out.  It’s an astonishing independent confirmation of the fundamental truth and power of Einstein’s equations, but more importantly, it opens up to human understanding an entirely new dimension of astronomical observation.  Whereas before we were restricted to electromagnetic radiations alone, we can now observe the very ripples of spacetime itself.

Thorne expects that further gravitational wave detections will be made in the coming year; when the VIRGO instruments come online, astronomers will be able to pinpoint the sources with greater precision and accuracy.

And there are designs in the works for new detectors that can register gravitational waves with periods, not merely in the millisecond range (as with LIGO), but in the range of minutes to hours, years to decades, and even billions of years.

And there’s likely much more to come.

“As we open a new window in astronomy, we may see things we’ve never seen before,” David Reitze predicted.

You can read the paper, which was published in Physical Review Letters, here. In the event that the peer review article is not accessible, as the website may go down again, the results and abstract are copied below:

Read This Next
Quacks Like a Duck
Those Headlines About Scientists Building a Wormhole Are Total Nonsense, People
Good Samaritan
Physics Dept Gets Random Box Full of $180K in Untraceable $50s and $100s
Ripple Burst
Scientists Detect "Tsunami" of Gravitational Waves
Brands We Love
Go Beyond The Science Headlines With The Fundamentals Of Physics Course
Not a Neutron Star, Not Yet a Black Hole
Astronomers May Have Discovered First-Ever "Black Neutron Star"
More on Hard Science
Tractor Beam
Jan 26 on the byte
Scientists Build Working Tractor Beam, Although It's Comically Tiny
Having a Blast
Jan 18 on the byte
New Study Shows Where You Should Hide to Survive a Nuclear Attack
Offworld Amino
Jan 15 on the byte
Scientists Find Building Blocks of Life in Meteor That Smashed Into Family's Driveway
READ MORE STORIES ABOUT / Hard Science
Keep up.
Subscribe to our daily newsletter to keep in touch with the subjects shaping our future.
+Social+Newsletter
TopicsAbout UsContact Us
Copyright ©, Camden Media Inc All Rights Reserved. See our User Agreement, Privacy Policy and Data Use Policy. The material on this site may not be reproduced, distributed, transmitted, cached or otherwise used, except with prior written permission of Futurism. Articles may contain affiliate links which enable us to share in the revenue of any purchases made.
Fonts by Typekit and Monotype.