"It is the rocket ride of your life." 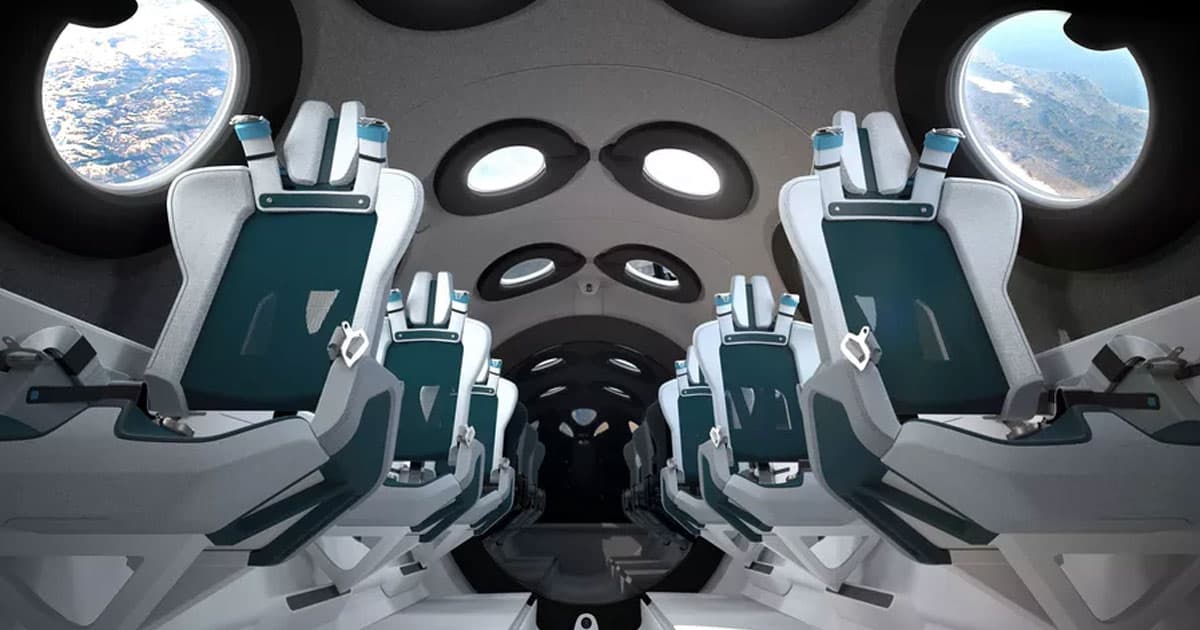 In a sleek announcement video, Virgin Galactic has unveiled the cabin interior of its SpaceShipTwo space plane, a vehicle meant to soon start taking those who can afford it to the lower edges of space.

In today's announcement, Virgin CEO Richard Branson called the interior cabin the "design centerpiece," claiming that his company's space plane was the "first to be built inside out."

"We started with what we believed would be an optimal customer experience and then we built the spaceship around it," Branson added.

"It is the rocket ride of your life," said Bess Moses, chief astronaut instructor, who became the first ever woman to enter space on a U.S. commercial vehicle during a test flight on February 22, 2019. "Space is deep, deep black, and looks endless."

The cabin is meant to focus on the view without impeding the passengers from moving around to get a better look.

The cabin is dotted with circular windows and two rows of racecar-like seats. Sixteen cameras throughout the cabin capture the experiences of all crew members. Each window has its own camera to capture close-ups of those looking through it in awe.

In another luxurious flex, passengers' suits will be designed by Under Armour.

Big picture, Virgin Galactic has ambitions to make space tourism a reality. The news comes after the company announced last year that it's planning to launch a shuttle of passengers into space, on average, every 32 hours by the year 2023. At the time, the company said that a single ticket would go for about $250,000.

In June, Virgin Galactic signed a contract with NASA to start training astronauts for trips to the International Space Station.

The company successfully flew its latest space plane, the VSS Unity, to an altitude of 51.4 miles (82.7 km) during a test flight in December 2018.

Whether that actually counts as "space" is subject to debate. While Moses was awarded commercial astronaut wings by the Federal Aviation Administration after her flight to 55.87 miles, many believe that the edge of space should be defined by the Kármán line at 62 miles (100 kilometers) above the Earth's surface.

Read This Next
Billionaire Space Club
Man Getting Paid to Fly Rich Guys to Space Says Don't Worry, They're Not Just Idle Tourists
Selling Seats
Virgin Galactic Lost an Absolutely Staggering Amount of Money Last Year
Billionaire Blast Off
Billionaire Says He's Buying SpaceX Launches for "Private Space Program"
Lucky Bastard
Billionaire Space Tourist Basically Says "Let Them Eat Cake"
Maiden Voyage
Check Out How Stoked This Billionaire Is to Leave Our Dying Planet
More on Off World
Take Cover
4:11 PM on the byte
Space Startup Blows Up Another Giant Inflatable Space Station Module
Rock Blast
3:28 PM on the byte
Scientists Say There's an Upside to Those Rocks That Keep Bludgeoning the James Webb
Meathead Theory
2:57 PM on the byte
Professor Receives Insane Email Claiming "Biological" Green Comet Is Giving Off "Meat Smoke"
READ MORE STORIES ABOUT / Off World
Keep up.
Subscribe to our daily newsletter to keep in touch with the subjects shaping our future.
+Social+Newsletter
TopicsAbout UsContact Us
Copyright ©, Camden Media Inc All Rights Reserved. See our User Agreement, Privacy Policy and Data Use Policy. The material on this site may not be reproduced, distributed, transmitted, cached or otherwise used, except with prior written permission of Futurism. Articles may contain affiliate links which enable us to share in the revenue of any purchases made.
Fonts by Typekit and Monotype.